An Interview with Kevin Shimmin 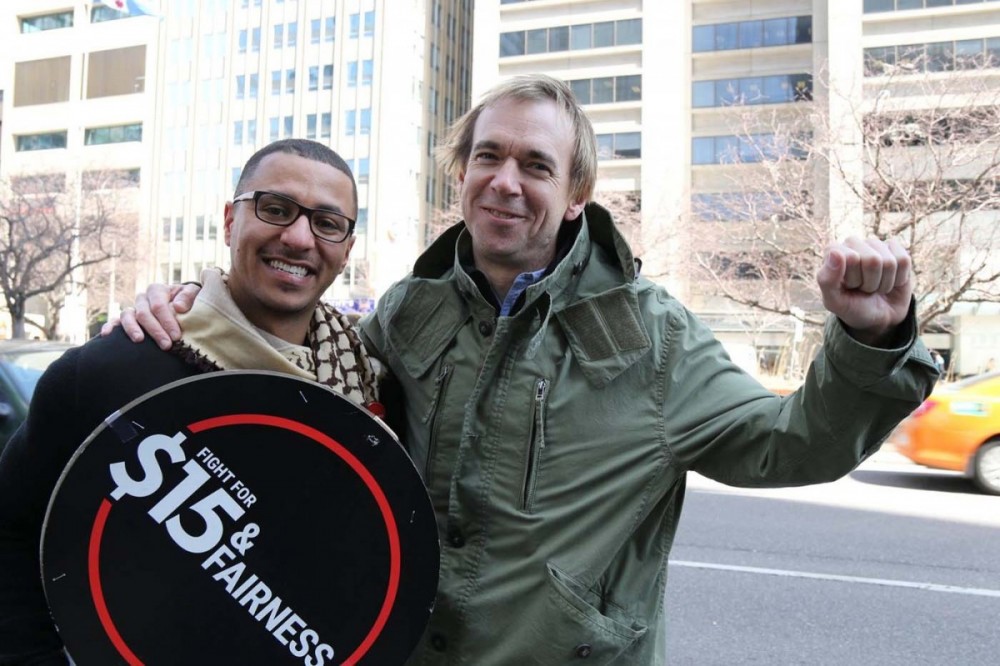 Kevin Shimmin (right) with Ontario Federation of Labour secretary-treasurer Ahmad Gaied at a Fight for $15 and Fairness rally. Fight for $15 is now called Justice for Workers.

Participation in unions is at an all-time high, and just over the last year there was a surge in workplace organizing led by a younger generation of workplace leaders. Entering into an already precarious economy, further worsened by the pandemic, Indigenous, Black, and People of Colour (IBPOC) workers are engaging in organizing efforts to secure justice within the workplace. Many of these workers are employed in frontline jobs such as grocery stores, restaurants and retail.

I spoke with Kevin Shimmin, a national representative of the United Food and Commercial Workers Union (UFCW Canada) on behalf of Our Times, to understand how the union is evolving in response to the changing demographics of Canada’s essential workforce.

Sarah Shahid (SS): We have noticed that a younger generation of IBPOC workers are rising to the occasion and organizing their workplaces. In your experience, how would you categorize this phenomenon? Is there anything unique to the economic and social experience of millennials and Gen Z that contributes to workplace organizing?

Kevin Shimmin (KS): I’ve been organizing for the UFCW for 20 years and probably some of my most favourite campaigns are always with the younger workers. I think for millennials and Gen Z, they’ve come into a work environment where it’s almost impossible to find secure, good paying, full-time work. And then, it’s even more impossible to find a unionized job. At the same time, I think young workers are witnessing and participating in these broad-based social movements, for climate justice, Black Lives Matter, and Indigenous movements. For this generation, it’s so much easier to make the connection and ask: why shouldn’t I be fighting for justice at my workplace?

SS: In your experience, what are younger workers looking for in a union?

KS: First and foremost, they are looking for a voice. There are several issues such as bad pay, not enough hours, health-and-safety violations that may contribute to people wanting to organize. But with younger workers in particular, they fundamentally want a voice in their workplace and in the union. I think the ability to have Just Cause protection [meaning there must be a justifiable reason to fire a worker covered by the collective agreement] and to actually know that their job is protected is important to young workers, since it removes the fear of speaking truth to power.

During the pandemic, this really became front and centre when you had workers refusing unsafe work. Many employers continued operation, but they hadn’t put in any proper protocols for health and safety or arranged for protective equipment. So, you suddenly had so many young workers realize that their work was completely unsafe.

In the case of the Indigo at Square One Mississauga, for example, the issue that first drove them to call us was because they had petitioned to not clean the customer washrooms. And the company basically turned around and told them that they will be fired if they don’t comply, which drove them to call the union.

I think for the younger generation especially, having that protection to speak up is crucial. There is a particular need for strong protection against harassment, discrimination and violence — and to have that in a legally binding collective agreement.

SS: What kind of training, educational materials and other support did the union provide the campaign drive?

KS: Because of the pandemic, we’ve gone almost completely electronic. In order to protect workers during the lockdowns, now the card signing is electronic, the voting by the Labour Board is electronic, and so are almost all of our meetings. In order to win a vote, we need to be in meeting with workers, usually face-to-face, leading up to the vote, to make sure that they can trust us. And to make sure that they have enough courage to vote yes. So, that’s also gone virtual. 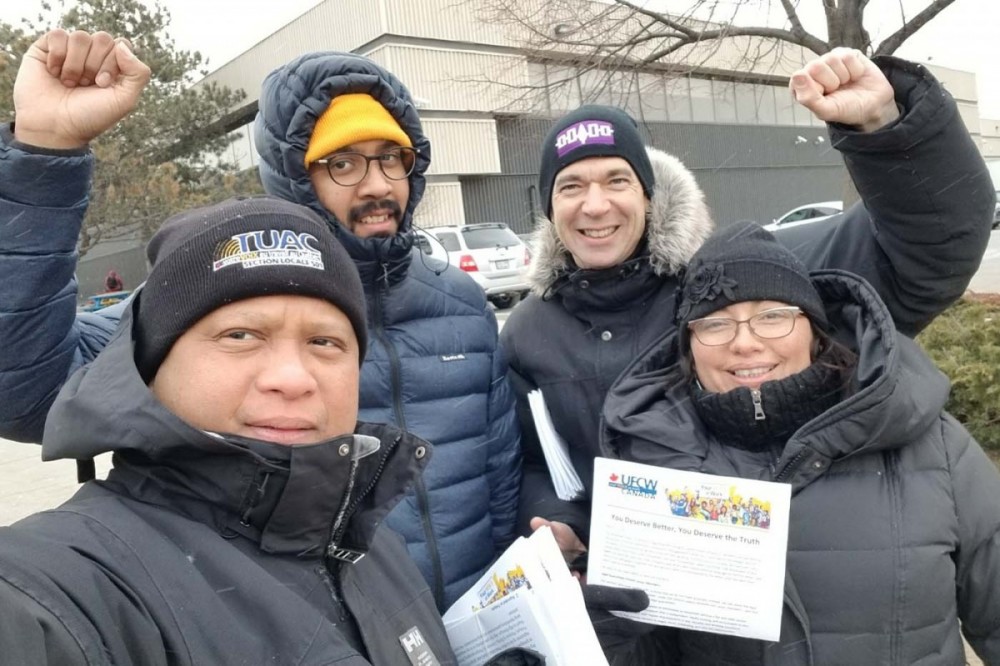 The materials that we used prior to the pandemic would have been a lot of leafleting and paper material that we would hand out in the workplace. But this time, we had to basically make those things electronic and make them short and brief, cutting down all the unnecessary language, so that the workers themselves could then share it on social media.

With younger workers, there’s probably almost no cons to using social media, because most of them are active on the platforms. They are able to continue being involved directly in the campaign, as much as they want to, without retaliation from the workplace.

SS: Which communication platforms and strategies were most effective when communicating with these younger workers?

KS:  We found Instagram and Twitter were excellent for getting all that broad-base public support for the workers themselves. And then we did do a very creative online rally where the workers broadcasted from their personal Facebook or YouTube. For communications between myself as organizer and the actual workers in the store, we used WhatsApp groups and virtual meetings over Microsoft Teams.

SS: Do you feel that younger workers have a different style of organizing than older ones?

KS:  It’s actually beautiful how younger workers organize themselves. As union organizers, we’re always trying to push for things to go quickly. For example, ideally a card-signing campaign shouldn’t last too long because people start to jeopardize their own jobs. In the case of the young workers at Indigo, once we were able to make the application with the electronic codes, the workers took over and pushed the campaign quite quickly. They were primarily using Instagram to garner massive support for the campaign.

SS: The union drive at Indigo Square One had several endorsements from politicians, celebrity activists and authors. Did the workers come up with this strategy or was that support spontaneously offered in response to workers amplifying their voices through social media?

KS:  It was very organic. The workers told us that they wanted the campaign to blow up on Instagram. And we offered to get some video testimonials of people to support them. We were able to get the first one, which was Olivia Chow, but then the workers took ownership in amplifying that and got support from Libby Davies, Naomi Klein, Jagmeet Singh, author Zoe Whittall, and other politicians like Matthew Green [NDP MP for Hamilton Centre, Ontario]. Once we took the initial step, they took the lead, and basically took off.

SS: What do you find especially inspiring about this new kind of organizing and how do you see it evolving in the future to build workers’ capacity and bring about collective social change?

KS:  The Indigo campaign itself is probably the most inspiring thing I could have participated in during the pandemic. It really, truly gives me hope. These are people who started their careers in a completely precarious economy. They’re not afraid to speak truth to power. They’re active with other struggles for social justice.

I find that young people are actively reaching out to integrate themselves with different social movements, so they don’t see the divisions that some older workers do. I feel that young workers have a healthy skepticism of power and authority.

As an organizer, I think fear is the biggest factor that we are trying to overcome. Whether you’re trying to unionize your workplace, or fighting for the climate, or fighting against racism and the police, the biggest barrier is fear of what could happen to me if I speak up. What I find with these new social media–driven strategies is that you’re able to experience people across the country or around the world who are directly supporting your campaign. When you feel like all these people are behind you, you’re not scared to speak up for your rights.

This new generation of young workers, many of whom are racialized workers, are the hope of the labour movement. As a union, we have to be listening to these young workers so that we’re changing and being more responsive to and representative of them.

Sarah Nafisa Shahid is a freelance writer based in Toronto and a member of the Spring Socialist Network.

This article originally appeared in Spring 2021 of Our Times Magazine. Support our work by subscribing, advertising, or donating today!