Into the Fire Zone

The Smokejumpers of the BC Wildfire Service 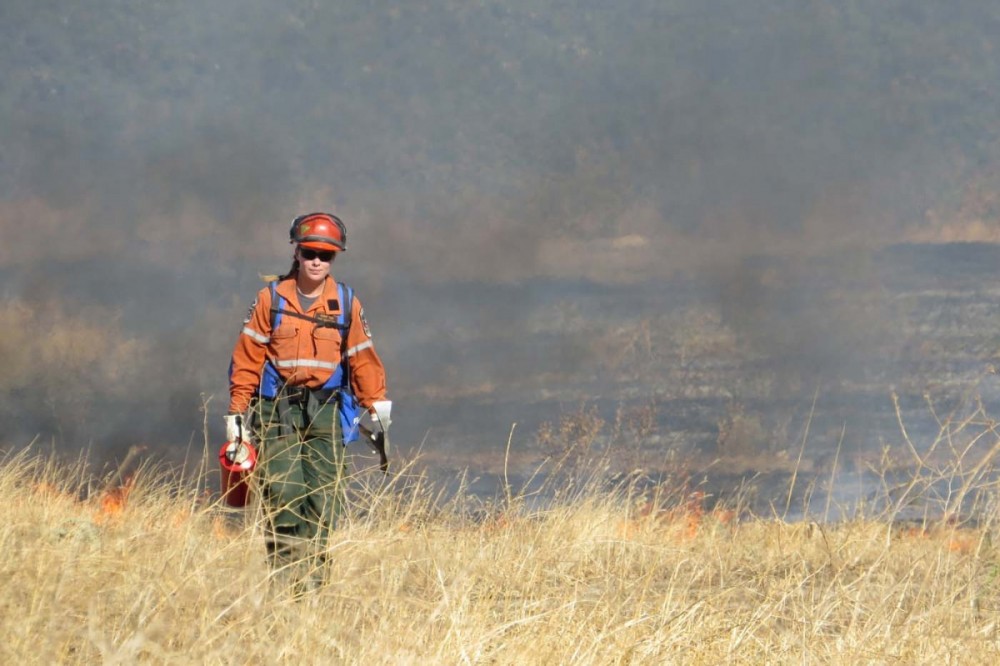 Ingrid Pond began fighting BC wildfires two summers ago, after accruing seven seasons on crews in Sioux Lookout, Ontario. For four of those seasons in Ontario, Pond was crew leader. There, she and her crew were transported to remote wildfires by helicopter. Now she’s part of a unique BC Wildfire Service program called Parattack. Her job in BC still involves flying to remote fires, but with a difference. When they arrive at the scene, she and her fellow crew members parachute from a plane.

An auxiliary employee and a member of the BC General Employees’ Union (BCGEU), Pond now spends six months of the year stationed in Fort St. John, BC, and the remainder in Buckhorn, Ontario.

“I had heard they were a good group of people,” Pond says about the Parattack crews, also known as smokejumpers. “I was perfectly happy being out in the bush in Ontario, moving hose around, with boots on the ground — but I needed a change.

“I remember the first time we jumped,” Pond says. “I thought ‘nope I’m not doing this today.’ But the training is impressive.” 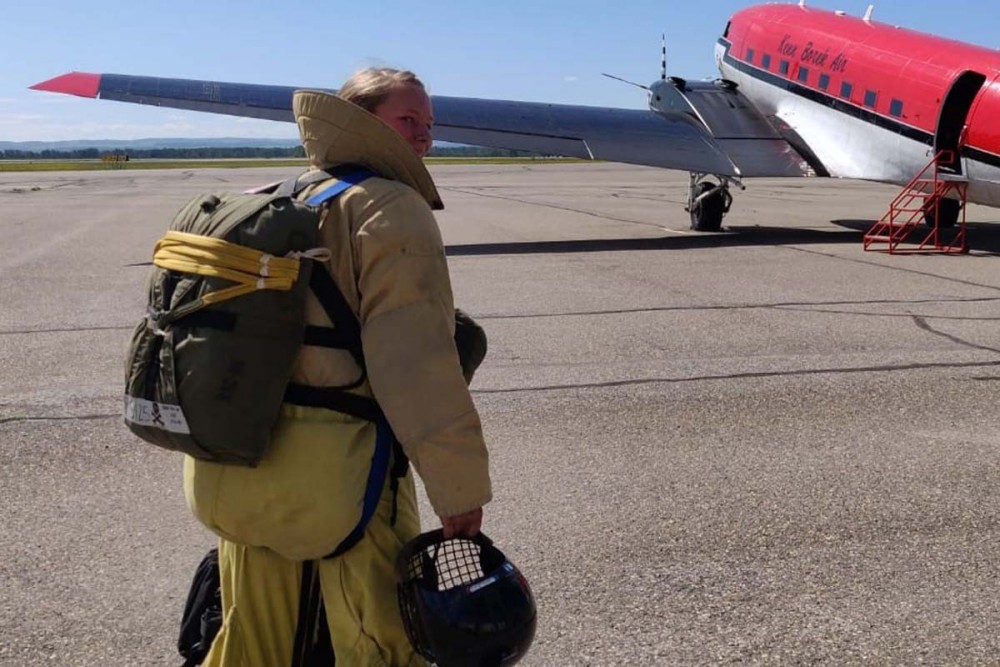 Smokejumpers are responsible for maintaining and packing their own gear, which includes everything from food, water and sleeping gear to chainsaws, hoses and water pumps.

“You learn the skills,” Pond continues, “and know what you have to do and how you exit the plane.”

The first four seconds in the air are very loud, Pond says. “It’s like jumping into a washing machine.” It gets quiet after that, she notes, and suddenly the chute opens up. “It’s a neat feeling. Then you have to think about getting to the drop zone.” Gear is dropped using cargo parachutes, after the jumpers have landed.

This past summer, Ingrid and 11 others, including Parattack crew leaders, crew members and support staff, flew to fire zones on board a DC-3 plane. Over the course of the season, the entire Fort St. John Parattack program made 64 jumps, with Ingrid herself "jumping into fire," as she calls it, a total of eight times.

On the ground, the crews fought fires from 100 Mile House, in the Cariboo region of central BC, to Merritt, in south central BC.

“When there’s one lightning fire, you know there’s going to be more,” Pond says. “We can deploy four crews, three people in each, on four separate incidents.” Sometimes parachute jumps aren’t necessary, Pond explains. In those instances, the DC-3 lands the crew at an airport or somewhere else on the ground, and they use land transport to get to the fire.

“It was eye-opening working with other crews,” Pond says. “There were members who had three days on the fire line. There’s high turnover and lack of experience. It’s the same in Ontario.” BC has been lucky not to face firefighter deaths, Pond observes, but she warns that deploying inexperienced crews could lead to serious health-and-safety issues. “There needs to be a big shift to focus on retention. We are going to be faced with more record fire seasons.”

As one of only three women on the Parattack crews based in Fort St. John, Pond says her overall experience of working mainly with men has been positive. “I do notice I strive to work a little bit harder, at least in my first years. When the demographic is that drastic, you have to. At this point, it’s not something I notice quite as much.” 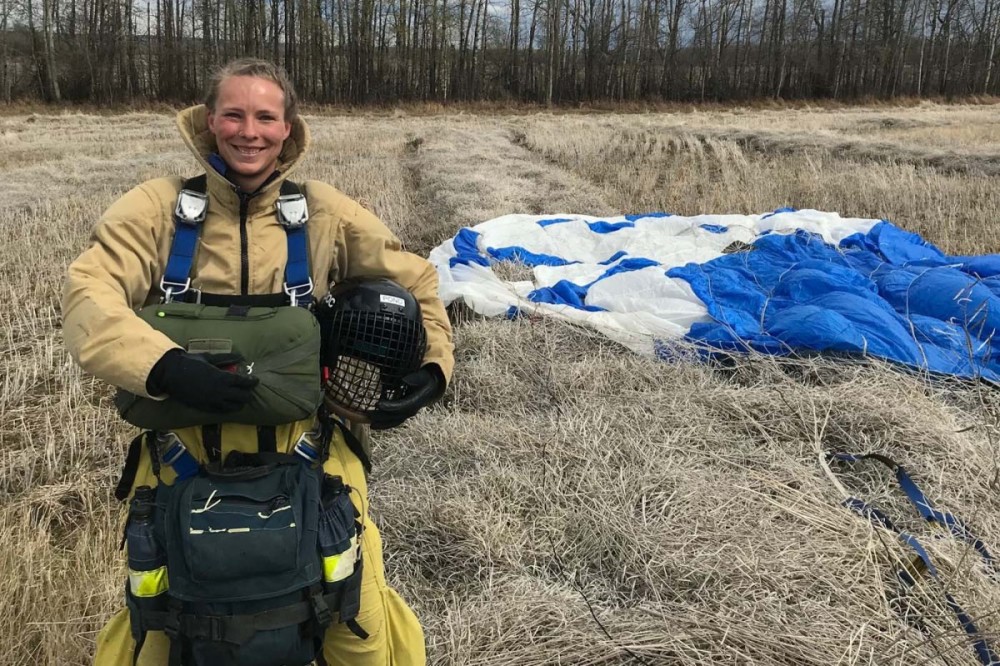 Pond supports prescribed burns as practised by members of Indigenous communities in BC. And, she says, U.S. trainers also offer valuable workshops on prescribed burns. But, she notes, there’s still a lot of pushback about the practice. “We first started by suppressing fires,” she says of the BC Wildfire Service. “It used to be the protocol for all fires, regardless of whether it was beneficial.

“People are scared to press the OK button, which is understandable because of the consequences if things go wrong. Public education could go a long way. Florida and the Carolinas have burning areas at certain times of the year. It’s become normalized. But in California, where there have been drastic [wildfire] losses, the public is not so sure about this.” Pond says many in BC feel the same uncertainty.

Despite her work experience in Ontario, Pond did not receive benefits until her second year of service in BC. “I’ve seen so many people who love this job. That includes me. But lots of good people leave because the wage is not worth it for what we’re being asked to do. It’s not really livable, and you rely on overtime.”

Pond believes a wage increase should be a top bargaining priority. As BCGEU heads into bargaining a new collective agreement, the union’s goals include the conversion of certain Wildfire Service positions to full-time employment, an overall pay increase, and the implementation of a hazard-pay structure similar to that of other wildfire agencies.

“The wage does not treat us like professionals,” Pond says. “I’ve worked alongside workers outside the Wildfire Service doing the same work and getting paid much more. It wears on you. It’s no surprise we have high turnover. It’s especially hard if you are trying to build a family. Everyone in the fire service is either single or divorced because you are away for six months of the year and never know what sort of contact you are going to have.”

In September 2021, BCGEU union representatives met with the provincial government to put forward their solution: professionalize the BC Wildfire Service, in partnership with members of the union’s wildfire committee.

Union representatives cited the need to fix the fire-response system along with issues of crew recruitment and retention. Proposed solutions include skilled wildfire fighters being employed year round, the service being integrated with Indigenous communities and incorporating Indigenous-led fire-management practices, and the service being properly resourced and self-sufficient.

Pond agrees. “We are seeing fire behaviour we haven’t seen before. The scope of the job has changed and so has what we are asked to do. More lives and homes are on the line. We are that last line of defence. There should be a lot more value given us.”