Chief Horseman’s Hopes for the Future 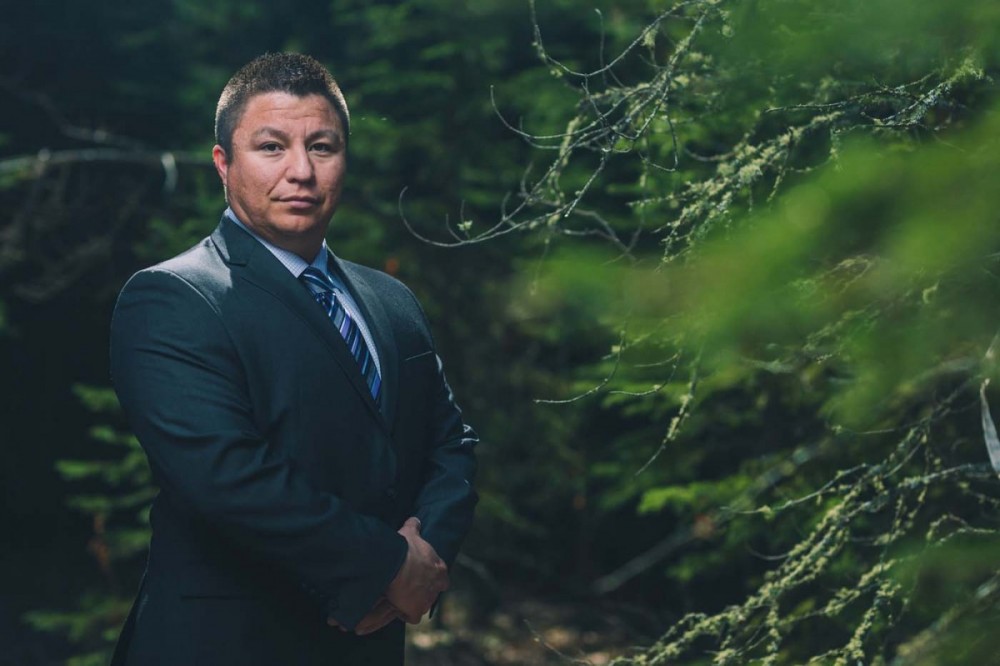 “We, as First Nations and government, need to start educating the people on what [renewable] energy really means, what green energies might do for us in the future,” says Chief Eugene Horseman. PHOTOGRAPH: BEAUCHAMP PHOTOGRAPHY

Chief Eugene Horseman of Horse Lake First Nation, Alberta, is hopeful that initiatives like these will hold long-term benefits for his community and the environment. He's a realist who tells Our Times that practical cost-saving measures have already made one installation of renewable energy technology a success locally.

"One of the most recent things that we accomplished here was having close to 300 solar panels installed on our multiplex arena, so it's going to help recover some of the electricity costs that we pay annually on the building. We're sitting at about $125,000 per year for electricity costs. From the information that the installers are sharing with me and the engineers, they figure at least a third of that will be covered by the solar panels, annually." 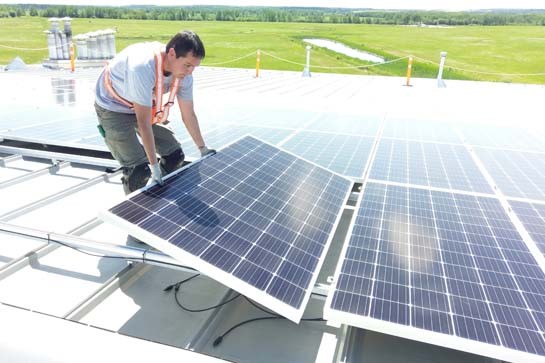 This installation is the first of what Chief Horseman hopes will be a number of government-grant-assisted conversions to solar power on Horse Lake First Nation. "Something like a 3,000-solar-panel farm, that would be beneficial to all of our community members," he adds.

OUR WAY OF LIFE

His perspective is informed by cost savings, but this is not his main or only consideration. "As far as the new energy goes, I think it's beneficial to First Nations for a number of reasons," offers Horseman.

"Our culture, our way of life, is living off the land. My teachers are my elders; my elders taught me how to live off the land, and because of the development all around us, of energy, oil and gas, which I do support as well, we have to come up with other ways to assist our First Nations communities, finding new ways to cut back on some of our living costs."

With the economic advantages of oil and gas development in Alberta came compromises in other areas, notes the Chief. "What I mean by that, briefly, is because of the involvement of energy all around us, in particular the Horse Lake First Nation-Grand Prairie area, it's creating a lot of undue hardship on the nations. Because of development of pipelines, access roads, drilling rigs, there's a lot of [industrial] activity around us."

Traditional ways are being threatened, and band members, particularly elders, have seen their food security, health and finances suffer. "A lot of the animals are going farther and farther away, deeper into the forest, finding new homes, because of all the development around us," explains Horseman. "What that's doing is taking away from First Nations' way of life, our livelihood.

"So our elders right now, who taught us to live off the land, are now in harm's way. They can no longer collect the food that they need for their livelihood, to feed them and their grandkids. The medicines that we took for hundreds of years are now gone within minutes of being dug up for development."

Fossil fuel dependence is being fostered, since driving into town for shopping has increasingly replaced hunting and foraging for food staples and traditional health remedies. It's a doubly cruel bind for older community members: "Because our elders don't have retirement funds, they don't have savings plans, they're really struggling now with their way of life."

Horseman, who has witnessed the pitfalls of fossil fuel over-reliance, is an advocate for alternatives. "There's the fear, that in 20 to 30 years, when the natural gas that they're drilling for in my area is all gone, and they move on to another area, we are going to be left with that destruction. This is the main reason I'm looking into new sources of energy for our people, because they're suffering."

He describes the pursuit of greener energy options as an extension of elders' teachings. "They like to protect the environment, in a responsible way, respect the environment — that's just the way we were taught." 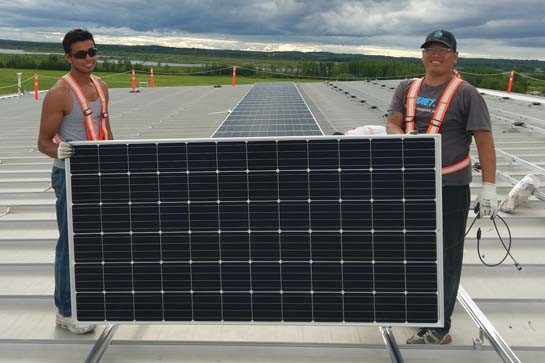 There's still a lack of certainty that surrounds renewable energy, particularly as it pertains to job creation. "You get caught up in and used to high-paying jobs. To go from that, to not much of a demand for new energy right now, or a ton of jobs, it can be really hard on somebody," notes the Horse Lake Chief. "Especially being a young individual, from having a lot of money, a high mortgage payment and vehicle payments, now, because of lack of jobs from the oil and gas industry, that can be very disruptive in a person's life."

Uninformed stereotypes about Indigenous peoples being "lazy" add another layer of discouragement, adds Horseman. He says younger and older workers alike are frustrated at the lack of career prospects with salaries and benefits matching those of the oil sands' heyday: "They want to blame government; they want to blame new energy; they want to blame somebody because they're angry and hurt.

"Oil and gas in Grand Prairie, Alberta, is everybody's bread and butter. Then when you take somebody's livelihood away from them, it hurts a lot of people. People are angry and don't know where to turn.

Horseman doesn't envision an inevitable substitution of emerging jobs in the renewable energy sector for those lost in the oil sands. "It's a really tough situation and a tough answer, because I don't know what the future holds for new energy. I don't know if we're going to be able to have the high-paying jobs like they did in oil and gas."

HURTING FROM A LACK OF ADEQUATE WORK

Socioeconomic costs accompany the personal distress resulting from inadequate work. "I have seen the struggles of people going from making really good money to minimum wage, and they lost everything," he observes with sadness. "They lost their houses, they lost their vehicles, and a lot of them turned to addictions to deal with their problems, and might have created some social issues for our country. A lot of people turned to drugs and alcohol to mask their pain...."

There are positive signs that the increasing affordability of renewable energy may mean lower ongoing expenses and added incentive for expansion. "We, as a community, try and come together on these initiatives. We have band meetings monthly, to talk to Chief and Council," explains Horseman. "The members are very excited about the solar panel initiative and some of the other projects we're working on. Currently, we're working on a co-generation plant."

This project, facilitated by Government of Alberta grant funding, is in the planning stages. If it is found feasible, a Horse Lake First Nation "co-gen" plant will be used to heat the local arena and also provide a greenhouse facility in which members can learn to grow their own food.

The "co-generation" in the name refers to the three sources of fuel which can be used to power the plant: There is a preference for biomass from local logging waste materials, and pre-sorted garbage with recyclables removed ("waste management"), but it can run on natural gas if necessary.

"Everything takes time," says the Chief. "Right now, I'm really happy with the government for wanting to take these baby steps into new energy."

Status Energy, wholly owned by the Horse Lake First Nation, has been a "service provider" to the oil and gas sector since 2006. Horseman acknowledges the ongoing value of offering oilfield services (i.e. truck and tanker fluid transportation, and logging/clearing for oilfield development).

"I'm not 100 per cent calling out oil and gas energy," he states. "We are a service provider for the most part, but the idea of new energy is exciting. I'm looking forward to it."

Even 10 years ago, Horseman says it was possible to live completely off the land, locally. Elders' observations have confirmed that climate change, pollution and habitat loss have removed that possibility. For this reason, he regards ecological education as indispensable in efforts to reduce environmental damage and social malaise. First-hand opportunities for learning diminish as the traditional way of life becomes more and more imperilled.

"As far as the kids who live in the city, I don't know if they have that same [traditional First Nations] teaching. I don't want to criticize them in any way — I think that if somebody was to teach them, I think there would be a willingness there also, to help preserve the land the best that they can.

"We, as First Nations and government, need to start educating the people on what [renewable] energy really means, what green energies might do for us in the future. We just need a better understanding, whether you come from First Nations or not."

The idea of "just transition" is to consider workers' sustainable well-being as well as that of the ecosystem. Horseman suggests that, currently, it is impossible to cite a form of renewable energy that provides the quality employment and ready convenience created by oil and gas.

"So renewable energy, I think there's a way for it — I don't know how," he says, equal parts optimism and honesty. "It takes a number of years to develop it. It's not going to happen overnight, but with the government wanting to invest in the new energy, I'm thankful for that. It is going to help out my community in the long term. It's going to be a way of life in the future, too, eventually."

This article originally appeared in Summer 2017 of Our Times Magazine. Support our work by subscribing, advertising, or donating today!