A Burning Question: Coal or Tires 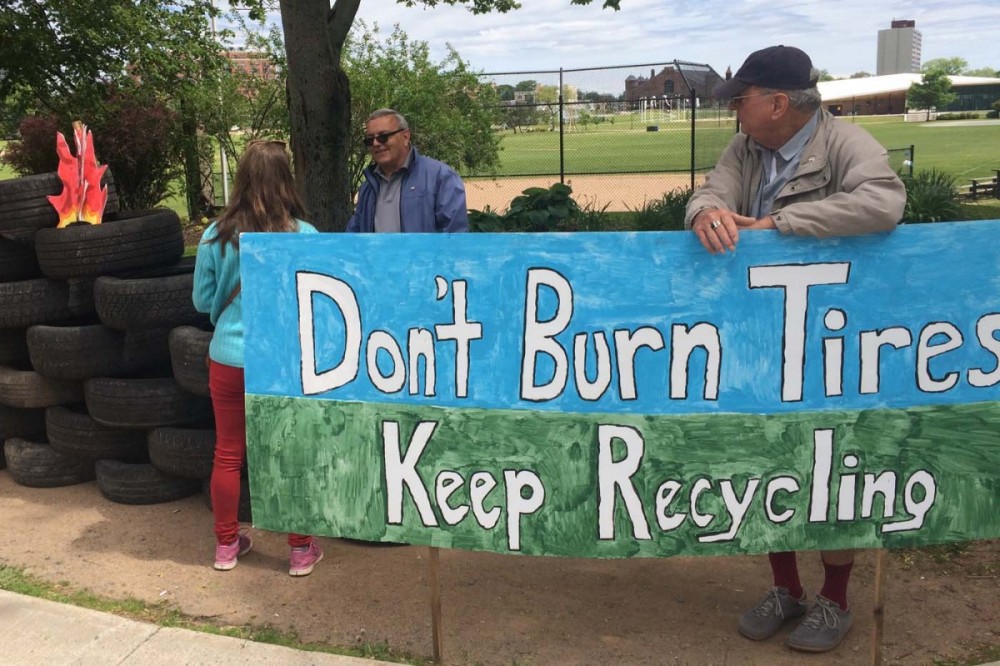 A June 15 demonstration against burning tires, at the corner of Cogswell and Robie Street in Halifax. PHOTOGRAPH: SAMANTHA MOSHER

LafargeHolcim, the world's third largest building supplies company, wants to burn 400,000 used tires a year at its cement plant just four kilometres away from the village of Brookfield, Nova Scotia. Should we be worried?

The corporate behemoth argues that switching the plant's fuel source from coal to scrap tires would be a good thing, since it would reduce the plant's greenhouse gas (GHG) emissions by 30 per cent and nitrogen oxide emissions by up to 15 per cent. As part of its global strategy to reduce costs and lower emissions, the company has already switched from coal to scrap tires at its plants across Europe, in 19 American plants, and at one plant in Quebec. Their proposal for Nova Scotia, though, is anything but green.

The province's environment minister recently approved a smaller, one-year project to test the idea of switching to used tires. If testing goes as planned, a giant conveyor belt will be built to carry tires up to the top of a kiln, into which they will be deposited and burned for fuel. The kiln would burn the tires whole at 1,600 degrees Celsius, a temperature so hot that tires would disappear instantly.

The switch, argues the company, would be good for the environment, and it would also help the province dispose of unwanted tires. The problem is, Nova Scotia doesn't have any unwanted tires.

All of the province's one million used tires per year already get recycled by Divert NS, a not-for-profit corporation that manages a province-wide network of enviro-depots. It administers two core programs: one for beverage containers, and one for used tires which are made into an aggregate used in the construction of buildings and roads. Tire-Derived Aggregate (TDA) replaces mineral aggregate, which has to be mined and processed.

It's true: burning tires would produce fewer emissions than burning coal. However, LafargeHolcim's plan would mean removing tires from recycling, which would, in turn, increase the demand for mining raw materials; any emissions reductions would be cancelled out.

Switching from coal to tires will not reduce GHG emissions, but there could be a financial benefit. Nova Scotia adds an environmental handling fee onto the sale of every tire in the province. For passenger tires, which are the kind LafargeHolcim is interested in, that's $4.50 per tire. If the company gets its way, that money could go right into its coffers. Along with a free fuel source, LafargeHolcim would receive a portion of the environmental fee, which could be as much as $1.8 million per year. Last year, 96.5 per cent of revenue from the handling fee went to support Divert NS's tire recycling.

As far as jobs go, Divert NS currently employs 28 people in full-time, permanent positions, plus one person on contract. LafargeHolcim estimates that diverting scrap tires to its plant could create approximately 10 jobs. Most of these jobs would be temporary, pay close to minimum wage, and presumably come at the cost of Divert NS's employees.

This is the second time that Lafarge has proposed using tires as fuel at its Brookfield plant. The province previously rejected the proposal in 2007, citing too many risks and unknowns. On top of emissions, burning tires produces a toxic array of by-products. LafargeHolcim claims that its plant will still meet air quality standards, but industry research shows that burning tires will mostly likely increase pollutants.

None of this accounts for the fact that kilns are complex systems with many variables; it's impossible to keep conditions constant. If the temperature falls below 1,600 C, tires might not completely combust, releasing more toxins and heavy metals. The company's own modelling for the switch indicates a 28 per cent increase in highly toxic dioxins and furans. Even in 2014, under normal operations, the plant affected air quality so much that nearby residents were forced indoors.

"The research hasn't changed," says Kate Ashwood, a former intern with the Ecology Action Centre, in Halifax. "There are no new findings. On top of [research findings] not having changed at all since 2007, there's no independent research. The only thing that's changed is that Lafarge has done more schmoozing."

Schmoozing, it seems, has done LafargeHolcim well in the past, as has the company's ability to seek profits wherever and however they can be made, with no regard for human cost. The company operates in 90 countries and, in 2015, recorded net profits of $1.9 billion dollars. Recently, the company sparked a backlash in France when its CEO announced that LafargeHolcim was willing to supply the materials to build Trump's wall. Just weeks before, an investigation in Switzerland found LafargeHolcim guilty of paying off armed groups in Syria in order to keep their cement plants in operation.

Burning coal is bad, but in this case, burning tires is worse. By now, Nova Scotians should be wary of come-from-away corporations promising quick fixes. Instead of jeopardizing people's health and giving $1.8 to an unscrupulous international corporation, Nova Scotia should invest in local people and local, publicly owned and not-for-profit solutions to climate change.

This article originally appeared in Summer 2017 of Our Times Magazine. Support our work by subscribing, advertising, or donating today!