STAND UP AND SPEAK OUT 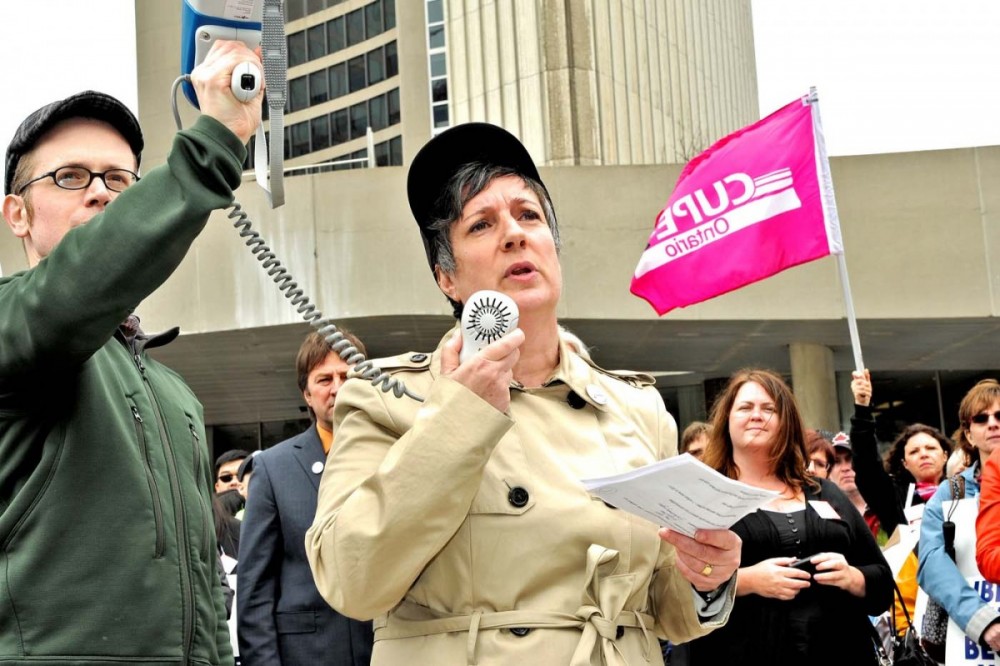 "On the one hand, I am a librarian and, as such, I am professionally committed to freedom of speech and bringing forward a broad range of viewpoints in the library," says Maureen O'Reilly, president of the Toronto Public Library Workers Union (Canadian Union of Public Employees Local 4948). "However, we are living in a time where the inclusion of that group in the library was, to me, problematic."

She is speaking of the July 12 room-booking at Etobicoke's Richview Branch by a neo-nazi group to hold a memorial for lawyer Barbara Kulaszka. Kulaszka, in her day, enthusiastically defended known white supremacists and self-described white nationalists and holocaust-deniers.

"I think it was a deliberate intent on the group's part to basically do their activity in public space, to lend legitimacy, and also to test the waters as to where the public attitudes are," says O'Reilly. "Somebody said the same thing about Charlottesville, that they were using a public space to sort of legitimize their protest."

As the events in Charlottesville showed, an ineffectual response to a very public show of extremist views, under the guise of free speech, will only permit more extremist, neo-nazi and white supremacist rhetoric in public spaces.

Library patrons weren't happy, and there was an outpouring of criticism at the library's decision to allow their space to be used for a neo-nazi event. The ensuing debate revolved around the question of freedom of speech, and how it is regulated in public space.

To be fair to the library's management, the nature of the event only became known on the morning the event was to take place, which left little time for the TPL to consider its response. Still, according to O'Reilly, the safest and best course of action for the library would have been to delay the event and consider the issue further before making a decision.

"The library was being put in a difficult position in that it was the same day," says O'Reilly. "But again, I think that was part of the deliberateness of the action. Basically the library played into the game, if you will. I think it was poor political judgement not to err on the side of caution and look at the implications for the broader community."

As O'Reilly postulates, perhaps the entire situation was orchestrated to force the library to set a precedent that would benefit those who would take advantage of the notion of free speech, to justify hate speech. Again, humouring the question of free speech when the real issue at hand is hate speech will only enable those with hateful agendas.

Referring once more to Charlottesville, O'Reilly says, "Certainly there's freedom of speech, but this is hate speech and people have to stand up and call it for what it is. The library was unable to show that kind of leadership."

To much criticism, the library chose to make a swift decision and allow the event to go forward that evening. "We do not tolerate hate speech," read the library's official statement. "However, we cannot deny bookings from the community that are in accordance with the law and the library's policy and rules of conduct. To deny access to library spaces on the basis of the views or opinions that individuals or groups have expressed in the past contravenes the Canadian Charter of Rights and Freedoms and the principles of intellectual freedom, both cornerstones of the library's mission and values."

Toronto Mayor John Tory tweeted that he requested the library cancel the event, but that TPL "received legal advice that it cannot reject this room-booking request."

"Although it's a service open to everyone in the community, the library really alienated the majority of their traditional users that support them day in and day out," says O'Reilly. "I think they should have — it would have been wise — to err on the side of caution and say, 'We are just going to delay the program and look at it closer.'

"And in my view," she adds, there were issues in their own policy which they could have used to delay the booking and it going forward." Namely, the fact that the booking was made under a fake moniker (a non-existent bookstore) and that attendees (around 25) were charged an entry fee — neither of which are allowed for bookings at a TPL branch.

Most obviously counter to their policy, the space was conceivably going to be used by those known to espouse hate speech, and definitely rented for the purposes of honouring someone who defended their alleged right to do so.

"One of the reasons I got into public libraries is that you want a broad representation of views reflected in your collections," says O'Reilly, "so that people can have a wide variety of information from which to make their decisions, draw their conclusions. Having said that, the library doesn't just buy everything that's published. There is a process where you examine the materials and there's several criteria on which you measure whether or not the material should be included in the collection. I think if the same principles had been applied to this event it would not have met the standards.

I think the thing that's key here is that most of the folks in that room were. . .there had been convictions on hate speech. So it wasn't really a question as to what their focus was going to be."

The union's position, posted on their website, was clear: the Toronto Public Library "failed their regular patrons. In situations like this we need to look back at how it affects our community of users."

IS THIS A UNION ISSUE?

The union made a statement about this issue — but is it a union issue? According to O'Reilly, yes it is, for two reasons. "One, it's a workers' issue if a program is taking place that may challenge the safety of both the staff and the patrons in the library," she explains. "And the fact that the library brought in a police officer and security guards and that the manager was going to be on site (managers don't usually work in the evening) would suggest to me that there was a potential for a health and safety issue." (Library staff were also in the room to monitor for hate speech.)

"And secondly, while for sure it's always a fine line regarding what non-workplace-based issues unions champion, I would say the library workers, Local 4948, have had a special relationship with the City of Toronto going back to the Ford days, when we fought back against budget cuts — and that we do have a leadership role to play around that."

In 2014, immediately following the late Rob Ford's term as mayor of Toronto, Local 4948 was recognized at the Min Sook Lee Labour Arts Awards gala for their campaign "My Public Library."

"We have worked very hard to reach out to the public," says O'Reilly, "to let them know about the issues that are happening in our library," such as underfunding and precarious work. The library workers were asking the public to support them in their issues and O'Reilly says the recent neo-nazi event "was a moment, in some ways, that we were called upon to return that support to our community."

With their award-winning campaigns and advocacy, Local 4948 has demonstrated a commitment to those they represent, the community they serve and the institution they symbolize — the library. Their clear and thoughtful stance on this issue is an example of how unions remain a site of political resistance beyond the specific realm of collective bargaining and organizing — "labour issues" are not always clear-cut.

"On the surface it may be a very simplistic problem, you know, freedom of speech," says O'Reilly. "But I think it goes much deeper than that and that certainly was the union's concern. One, the community, and secondly, the library's political response."

The union's response demonstrated the way unions can show leadership where other institutions don't. "I would say sometimes it's hard to have these discussions," says O'Reilly, "but the labour movement has always had these discussions. I think we're comfortable with saying, you know — who would honour freedom of speech more than a trade union? The collective right to protest and all of that. But trade unions also do have a long history of being involved in human rights issues. 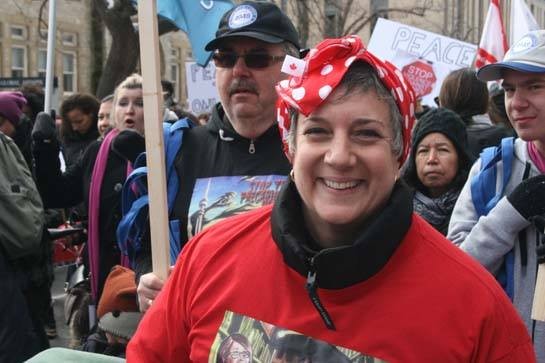 "The Toronto Labour Day parade theme this year is 'Stand Up and Speak Out,'" says O'Reilly. "Those words obviously can relate to many things, whether it be a push-back on two-tier bargaining; it could labour law reform; but also the issues of Islamophobia," a recent priority for labour leadership in Toronto. On July 10, the library union's executive board passed the Charter of Inclusive Workplaces and Communities, adopted by the Toronto & York Region Labour Council just the week before.

"A couple of our tweets have highlighted disturbing events that are happening in our community at the moment, in respect to Islamophobia, specifically, and racism in general," O'Reilly says of Local 4948's public stance. "I think the library needed to take that as part of their decision as well. Again, I would never support blanket censorship or anything like that at all. Everybody is so afraid of being accused of these things that we really fall into their hands" — the hands of the extreme far-right, holocaust-deniers, and white supremacists.

"I think they were trying to use the library as a political tool and they were successful in doing that. The library played into their hands. It's a hard discussion but we need to have it, and not just give into groups immediately."

This article originally appeared in Fall 2017 of Our Times Magazine. Support our work by subscribing, advertising, or donating today!