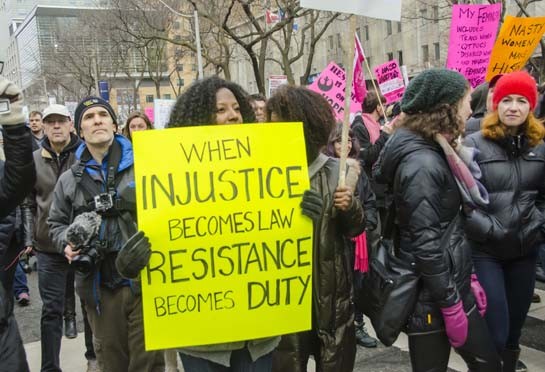 Don't be stunned or rest in a superficial analysis of our new world with this president, Trump.

There's a chance you've just been missing out on how Canadian and American societies have been changing. Perhaps you've been living in an echo chamber stoked by likeminded social media peers, insulated from racist and xenophobic attitudes around you, so all this may come as a surprise. It certainly has for me.

We are now at an inflection point in history, like it or not. We must prevent the rise of local and global dictatorships. And unless Canada's working people rise out of our complacency, we will miss out on our role. And no, I'm not being alarmist: the conditions of our world today are more like the rise of fascism in the 1930s than you may realize. So here are your survive-and-thrive mobilization tips. Raise your fist and seek justice like never before!

1. Know the definition of autocracy.

Autocracy is when someone holds dictatorial power over a nation. The system of checks and balances built into the U.S. government to prevent tyranny will be derailed for two years, or longer if the Democrats do not get a majority in either or both houses of Congress in 2018.

President Trump will have the support of a Republican-controlled Senate and House of Representatives. He will also appoint the next Supreme Court Justice, for a conservative majority. So the legislature and judiciary will not be reliable checks on the president's power.

Banana republics are autocracies. Mobutu's in Zaire was, and Papa Doc's and Baby Doc Duvalier's in Haiti. And Trump's America? Within 10 days of winning the election he tried to include one of his sons in security briefings, and a daughter sat in on his first meeting with a foreign leader. This is the behaviour of tyrants looking for a multi-generational grip on political power.

2. Know how to derail autocracies.

Naomi Wolf wrote a book in 2007 called The End of America: Letter of Warning to a Young Patriot. In it, she described how societies close themselves off and drift from democracies to totalitarian dictatorships. The book was poignant because of 9/11, the PATRIOT Act and George W. Bush's political excesses. Find this book. Read it. It's your roadmap. And remember, if Trump wants a Muslim registry and internment camps, that will spawn a Trump Gestapo to manage their populations. Do as the Twitter meme instructs: "First they came for the Muslims and we said, 'Not this time, mo**********!'"

Trump and Sanders were the populist candidates in this election because they better reflected the will and aspirations of the people than most presidential candidates have in generations. Populists position themselves as advocates of the people, not insiders who game the system to build power.

Clinton, obviously, was the classic insider candidate of a rigged system that people can now see through. While Trump and Sanders both campaigned against this political game, Trump appealed to the sentiment that a scapegoat population is either to blame or should be punished, just because: Mexicans need to be deported and Muslims rounded up or barred from entry. Please remember German scapegoats in the 1930s. And remember that Canada turned away Jewish refugees aboard the MS St. Louis in 1939 and Sikh, Muslim and Hindu British citizens on the Komagata Maru wishing to immigrate to Canada in 1914. Canada needs to find its own Bernie Sanders populist, and fast! And then there's Kellie Leitch.

Kellie Leitch is devoted to Trump's message, celebrating his victory over the elites. Perversely, both Trump and Leitch are both members of the elites. Under Harper, Leitch was a champion of the barbaric cultural practices snitch line. If prime minister, she wants to give visitors and immigrants a conveniently vague Canadian Values Test, which is dog-whistle messaging to her racist supporters that her Canada will keep out "other" people. She also won't disown or reject racists who support her leadership campaign.

Kellie Leitch is a clear manifestation of a politician seeking populist support from the intolerant people of our nation. We must call out her divisive behaviour and words, and reject her politics of hatred and othering. We also need to confront people dabbling in the "alt-right." Its focus is white supremacy. It is neither benign nor irrelevant: neo-Nazis have demonstrated an increasingly proud public presence in over three dozen countries around the world in this century, while anti-Semitic vandalism and white supremacy posters have been showing up around Canada since the presidential election.

5. Make sure our unions are up for the fight.

Our unions need to be places of sanctuary for the disenfranchised. Our rhetoric is nice but unless white people and male people in our unions, for instance, adopt an authentic and broad understanding of how marginalized workers live and what inhibits them in society, labour will be an ineffective element in a movement to fend off this emboldened fascism.

For instance, are our unions' staff and leadership reflective of the demographics of our membership, community, province or country? No, we are not there yet. Until our movement empowers the disenfranchised we will not be credible as change agents willing and capable of disrupting the slow trend towards further entrenched white and male supremacy.

So gather those you love and reach out to the vulnerable, to build the world we all deserve, where no one is destroyed by fear.

Stephen Elliott-Buckley is a CUPE research representative living in Vancouver. Visit his new blog at WePivot.