From Pandemic to Prosperity 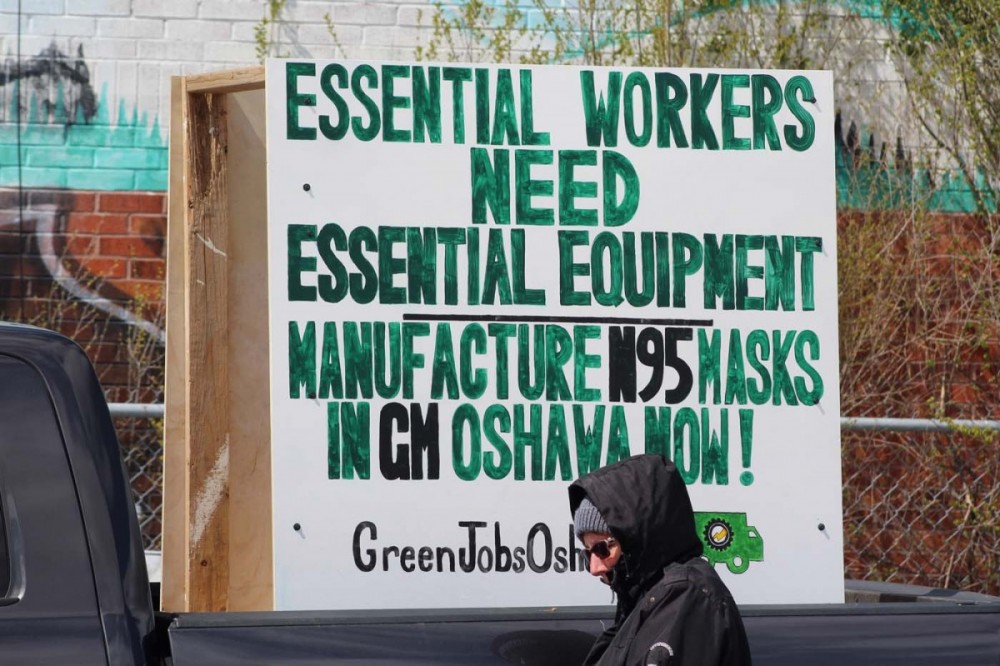 The news came in the form of a tweet. On April 24, Navdeep Bains, Minister of Innovation, Science, and Economic Development, announced that the federal government had contracted General Motors to manufacture masks at their almost-empty Oshawa plant, in Ontario.

Workers are seldom, if ever, publicly acknowledged when they win. But still, the announcement came as a complete surprise to the plant’s now laid-off auto workers and their allies in GreenJobs Oshawa who have been advocating for this move since the outbreak of COVID-19, and advocating for over a year to retool the plant.

When Minister Bains later shared details with the media it emerged that General Motors would employ only 60 workers and only on a temporary basis. In an area rife with mass unemployment, wracked by the departure of industry, the announcement is a lifeline to the few who will find work. But so much more can, and needs to be, done.

At the time of writing, Canada faces a shortage of 150 million N95 masks, plus additional shortages of Personal Protective Equipment (PPE) and ventilators. These shortages have placed workers and patients at risk and contributed to the spread of the novel coronavirus.

Making Our Own Medical Equipment

Clearly, Canada cannot rely on importing medical equipment. That’s why the Oshawa GM facility is so important. The 60 people employed will help, but the ongoing shortages of masks will still be severe. Now that the door has been cracked open to the idea of retooling, we need to kick it wide open to help save lives and to create thousands of good, unionized jobs.

Last December, after more than 100 years of operation, General Motors closed the facility and  moved production abroad, throwing more than 5,000 people in Oshawa and 10,000 people across Ontario out of work. The Oshawa GM auto-processing complex, once the largest in North America, now sits empty except for 300 jobs for after-market parts.

Since the outbreak of the virus, Prime Minister Trudeau has asked manufacturing companies to repurpose to produce PPE. Except for a few examples, that largely has not happened. Minister Bains’ announcement is an important first step, but it shows that we cannot rely on the goodwill of corporations.

Putting People Back to Work

Green Jobs Oshawa, the group behind the campaign to retool the plant, has welcomed this announcement as a small step forward, but is clear that the government is missing an opportunity to overcome equipment shortages in a big way, and to start putting people back to work.

Minister Bains’ announcement came exactly two weeks after a press conference where auto workers teamed up with healthcare workers, the Ontario Federation of Labour, and my employer, The Leap. Jointly we called on the federal government to retool the plant to address the country’s shortages of Personal Protective Equipment (PPE). The press conference was just one of the most recent events in a year-long campaign calling for the plant to be retooled. 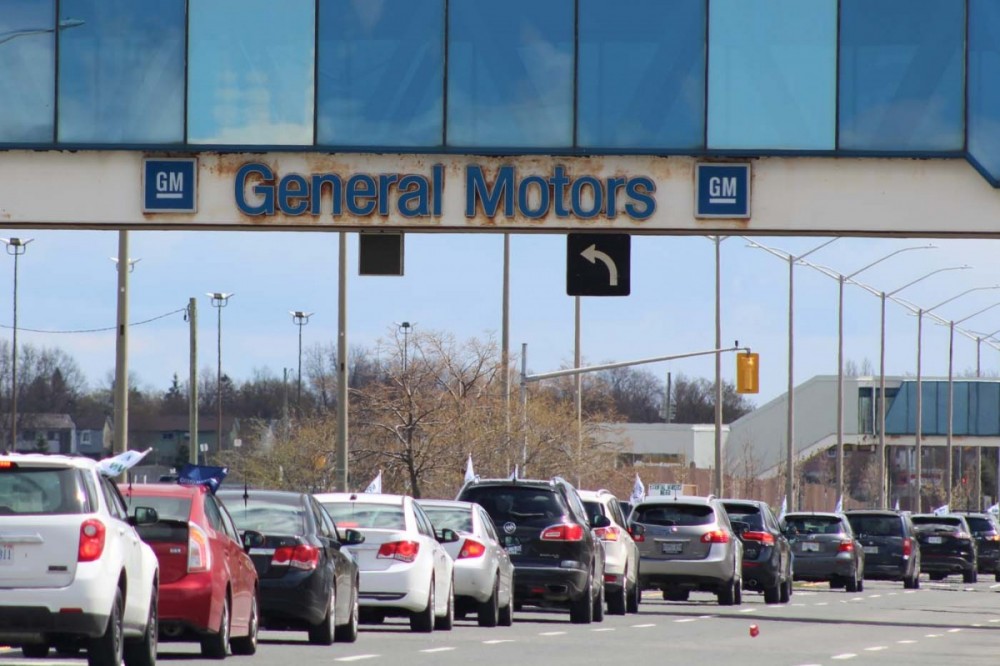 On May 9, Green Jobs Oshawa organized a solidarity cavalcade, where supporters decorated more than 62 cars and drove through town, making noise and calling for the government to increase production and to make it permanent.

The Leap recently launched The People’s Bailout, a crisis response to ensure that as we emerge from the coronavirus crisis, it will be working people and the planet that get “bailed out,” not the big banks and corporations. In the plan, we call on the federal government to create a local, public, medical-equipment industry; first by ordering facilities to switch production, and second, by taking public ownership of appropriate facilities, like the Oshawa GM complex.

The pandemic has shown us the deadly risk created by market competition for essential medical supplies. A public medical-equipment industry will create good, unionized jobs and make sure we have the masks, ventilators, and other medical tools we need before the next crisis hits.

Now, with the door open to repurposing the giant GM Oshawa complex, it’s time to go further and demand that we use it for its full potential. 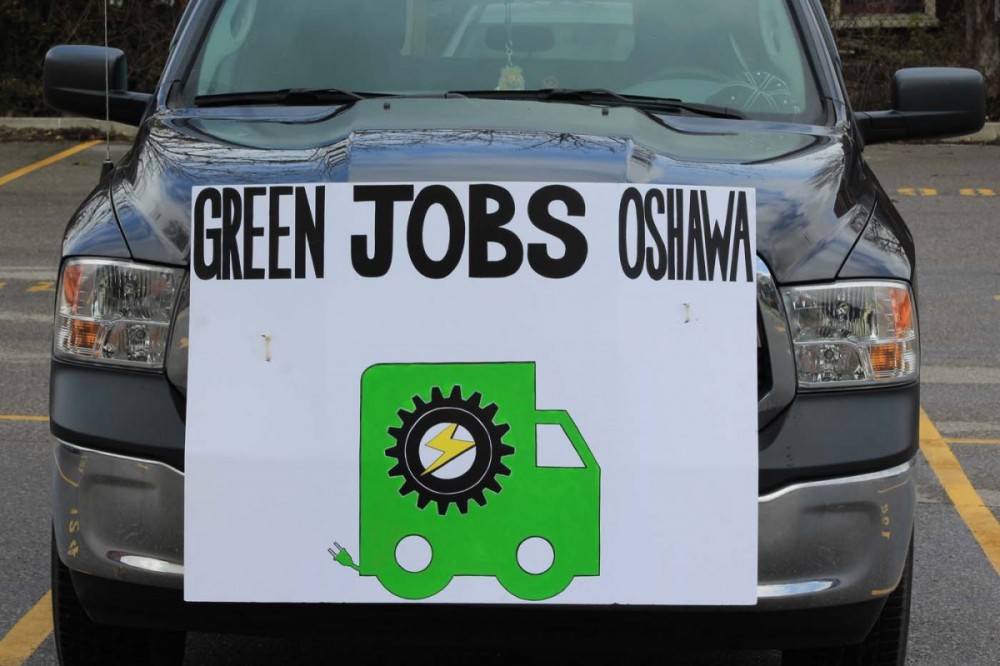 Last fall, Green Jobs Oshawa, with the support of the Socialist Project, commissioned a feasibility study on retooling the plant to produce battery electric buses and vehicles for Canada Post and other government agencies. The study found that with a small start-up investment, retooling would create 13,000 well-paid, permanent unionized jobs and become a profitable company within five years.

There’s no reason we can’t do both. The economic crash accompanying COVID-19 has completely changed what’s possible. Around the world, governments are nationalizing health care, introducing Universal Basic Income, and debating other transformative changes. Suddenly, everything is on the table.

Courage Coalition, an ally of Green Jobs Oshawa, has drafted a resolution calling on the NDP to demand public ownership of the plant as well as the ramp-up of permanent production of PPE, and the retooling of unused portions of the facility to manufacture battery electric buses and vehicles. The coalition encourages union activists to pass the resolution at their locals, and for NDP
members to pass it at riding associations.

In a moment of political possibility like this, it would be foolish to settle for 60 temporary jobs arising from GM’s benevolence, when bold government action could easily address PPE shortages, create 13,000 good jobs, and lower carbon emissions.

Let’s demand a response to the crisis that meets the moment, one that builds from pandemic to prosperity for all.