A Call to Nationalize GM Oshawa 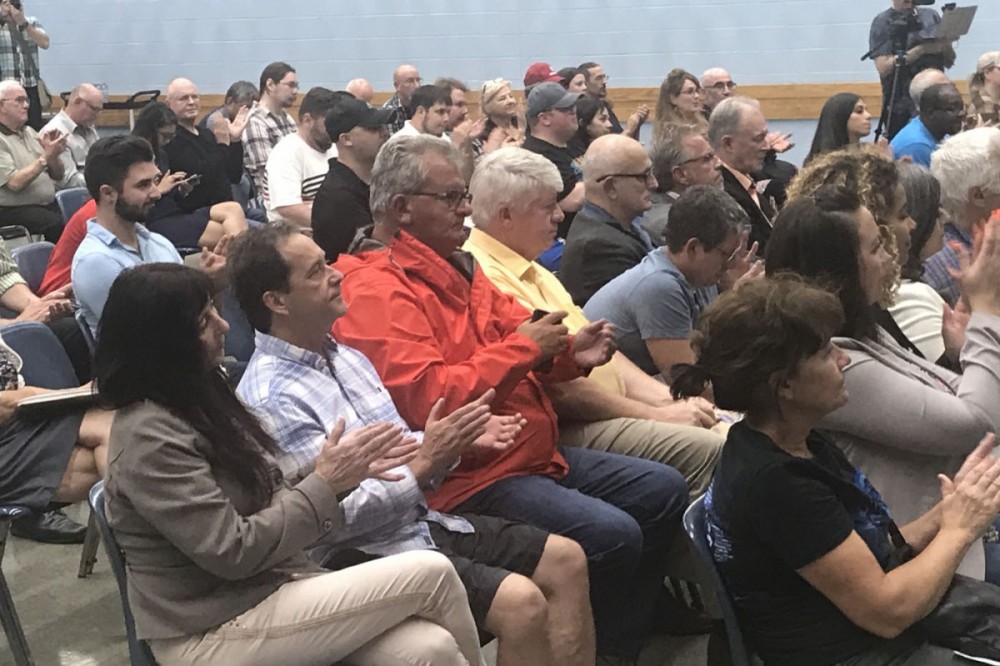 On September 27, millions of people joined the Global Climate Strike. From Buenos Aires to Bangkok to Toronto, they poured into the streets to mark the largest worldwide climate action in history. In Canada, more than 80 cities and towns took part, with over half a million marching in Montreal.

The strike was a resounding rejection of business as usual — a collective demand for system change, not climate change. For the first sign of what that change could look like, consider a soon-to-close factory in Oshawa, Ontario.

When General Motors announced the closure of its massive auto assembly plant in Oshawa, auto workers and their families were devastated. The closure will throw 15,000 people out of work: 5,000 assembly-related jobs in Oshawa and 10,000 indirect jobs will be lost. Faced with this crisis, auto workers and allies have come up with a creative solution: nationalize the plant and re-tool it to make electric vehicles.

Green Jobs Oshawa asked Russ Christianson of Rhythm Communications to produce a preliminary feasibility study, and his findings are incredible. If the suggested factory conversion is successful, the workers will be building the very engine of a Green New Deal in Canada.

Once the largest auto plant in North America, the Oshawa plant has over 10 million square feet of factory floor and spans the equivalent of dozens of square city blocks. At the height of its production, 23,000 people worked at the facility. The corporation has claimed it needs to cut costs and is closing five North American plants, and moving production to Mexico and China.

Unifor called the closure a betrayal and swore that GM was in for “a hell of a fight.” Elements of that fight — a $200,000 Super Bowl ad and a boycott of Mexican-made GM products — were questioned by many. But in May 2019, there was a glimmer of hope: GM agreed to invest $170 million in the production of after-market parts in the plant, and has promised that 300 workers will be working there by the end of 2020.

The study done for Green Jobs Oshawa goes further. It found that re-tooling the plant would create 13,000 permanent jobs and could produce 150,000 electric cars, light duty trucks and vans in five years.  Their first client could be Canada Post, which owns the country’s largest vehicle fleet. 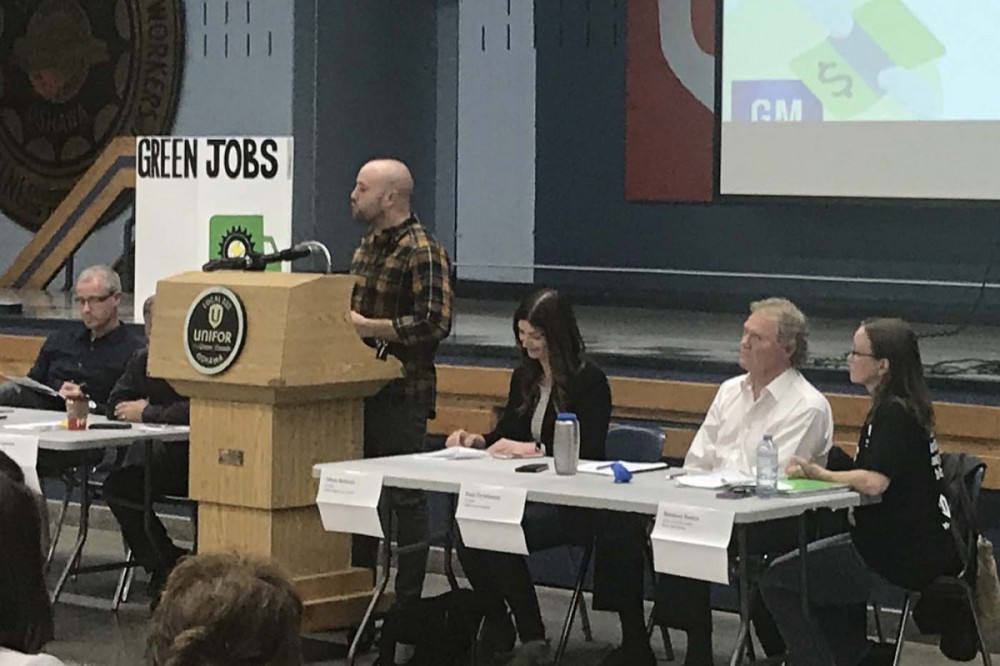 The combined cost to purchase and re-tool the plant would be $1.9 billion. The study shows that, with that upfront investment, the nationalized plant would break even in four years and begin turning a profit in the fifth. But, we shouldn’t have to pay a cent to purchase the plant from GM. Why? Because we’ve already paid for it, many times over. Auto-workers have paid for it too. For years, they have given concessions, accepted layoffs and taken pay cuts in order to keep the plant profitable and to keep jobs in the community. Plant workers have not seen an increase in wages since 2007. In 2016, a two-tiered contract saw new employees earning $20.92 an hour, about $15 an hour less than longer-term workers, and taking 11 years to get to the top rate.

And then there’s what GM has taken. In 2009, after the financial crash, GM received a combined $10.8-billion bailout from the Canadian and Ontario government. Ottawa refuses to disclose the conditions of the bailout or how much GM has repaid. What we do know is that Canadians were left on the hook for $2.8 billion.

If GM still owes us $2.8 billion dollars, then it’s not their plant, it’s ours.

The company has long cried poor. Yet, last year the company made $11 billion in profit. Apparently that was not enough, since they still decided to move the jobs to Mexico, potentially destroying a town that has given them a century of labour.

Our fight should not be with Mexican workers making $6 an hour. Our fight should be with the executives of GM, and the governments that collude with them to bleed workers for the sake of more and more profit. Last year, Mary Barra, the CEO of GM, made $122 million, 281 times the median employee. Last year, Trudeau’s government quietly wrote off GM’s outstanding debt. So far, they have refused to discuss nationalizing the plant.

GM has exploited workers for decades, and Canadian governments have enabled them. Now, workers from across unions, along with environmentalists, and social justice activists have banded together to fight for a common vision. That vision is gaining momentum. The feasibility study has given advocates the actual figures to force governments to respond. 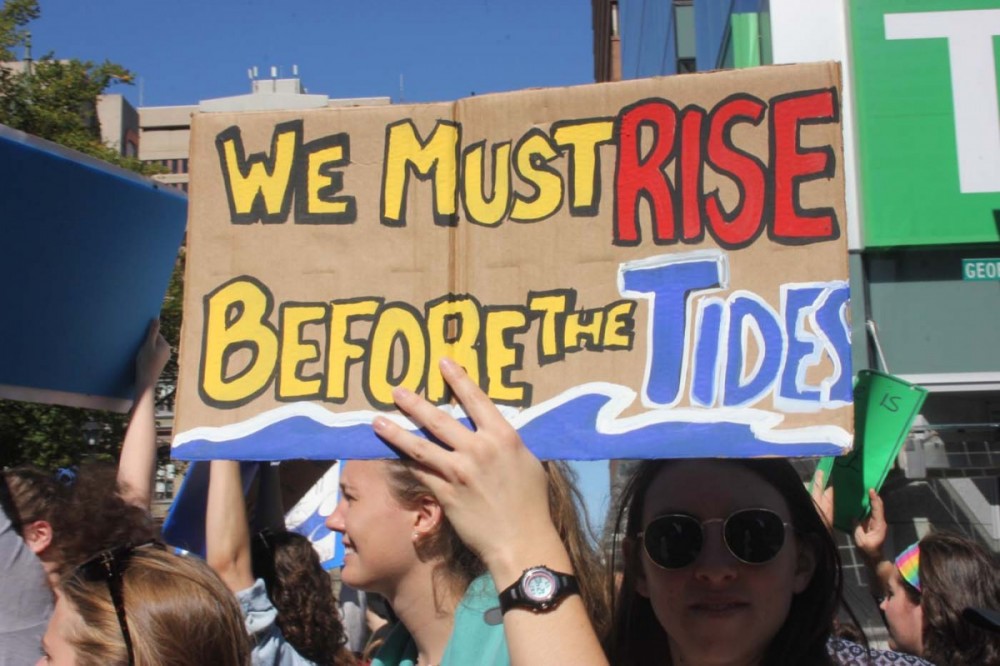 In Canada, more than 80 cities and towns took part in the historic Global Climate Strike on September 27. PHOTOGRAPH (HALIFAX): OUR TIMES

Like climate change, the threatened closure of the Oshawa plant is a crisis. But it is also an opportunity. It provides workers and their unions a chance to forge new links of solidarity, and to actively build the world we want, here and now. To win, they will have to be bold and resist anyone who urges calm in the face of a crisis. They will also need support, including endorsements from the labour movement, and people demanding that politicians commit to the plan. (Please sign and share their online petition.) And if auto workers decide to take over the plant themselves, they will need all of us to stand with them. Nationalizing the GM plant could be a first step in guaranteeing good, unionized jobs and a more sustainable and just economy for all.

This article originally appeared in Fall 2019 of Our Times Magazine. Support our work by subscribing, advertising, or donating today!