Justin Trudeau would like you to think he's standing up for globalization and free trade agreements only because he believes in democracy and openness.

In Hamburg in February 2017, Trudeau acknowledged that increasing inequality has made citizens distrust their governments. As Bill Curry reported in The Globe and Mail, Trudeau said "we're watching that anxiety transform into anger on an almost daily basis. It follows that people's natural defence mechanism in times of stress and anxiety is to hunker down and recoil inward. To give into cynicism. To retreat from one another. But it's time for us, as leaders in politics and business, to step up."

For Trudeau and his staunchly and historically pro-trade Liberal party, "stepping up" means signing on to as many so-called free trade agreements as possible. Not content with signing the Canada-Europe agreement (CETA), Trudeau's government has been chasing after the Trans-Pacific Partnership (now signed) as well as renegotiating NAFTA and a dozen other bilateral deals.

For a decade or so, from the mid-'90s to the early 2000s, it seemed every demonstration I attended was against globalization, deregulation, and neoliberalism: the trifecta of evil embodied by the World Bank, the International Monetary Fund (IMF), and the World Trade Organization (WTO).

Those of us who opposed globalization as it was manifest in the FTAA (Free Trade Agreement of the Americas) and NAFTA were clear that the problem with corporate-led globalization was the corporate bit, not the global integration bit. Marching against the WTO was not tantamount to marching against Mexicans having good jobs. Wanting to preserve public services was rooted in the value of universal health care and education, not in some "America/Canada/Europe first" fantasy.

It was possible to be for international cooperation and for human rights and to be opposed to IMF and WTO-led globalization. That's why we marched for fair trade, against free trade, and why we mobilized for global justice, and against globalization.

But as "alt-right" movements have gained popularity in Europe and in North America, there's been a blurring of the lines between what I'll call  — clumsily  — the Trumpist anti-globalists and the Trudeau internationalists.

Trudeau would have you believe that Canada's sign-every-trade-deal-you-can strategy is the only way to demonstrate our commitment to internationalism. If we are critical of free trade agreements, then we are xenophobic fanatics, ready to patrol the borders of our country to keep out job-stealing immigrants and desperate refugees.

RACE TO THE BOTTOM

The irony is that the race to the bottom that we anti-globalization activists warned about in the 1990s is manifest in the declining living standards of workers in the Global North. Hundreds of thousands of good manufacturing jobs have been lost in the U.S. "rust belt" and in Canada. And more and more workers are working temporary part-time jobs in the service sector because secure ones are so hard to come by.

No free trade agreement is going to bring back good jobs to Port Alberni, BC, or Windsor, Ontario. And whether Trump follows through with his threat to tear up NAFTA or not, Scranton and Detroit will never recover. Neither Trump nor Trudeau will be able to stanch the flow of jobs to jurisdictions without comparable labour or environmental standards.

GOOD JOBS FOR ALL

We want to keep good jobs in Canada and the U.S.? Then we have to fight for good jobs in Mexico  — and in Honduras, and in Vietnam and in Bangladesh  — and impose restrictions on trade with countries that refuse to grant basic standards to their workers. 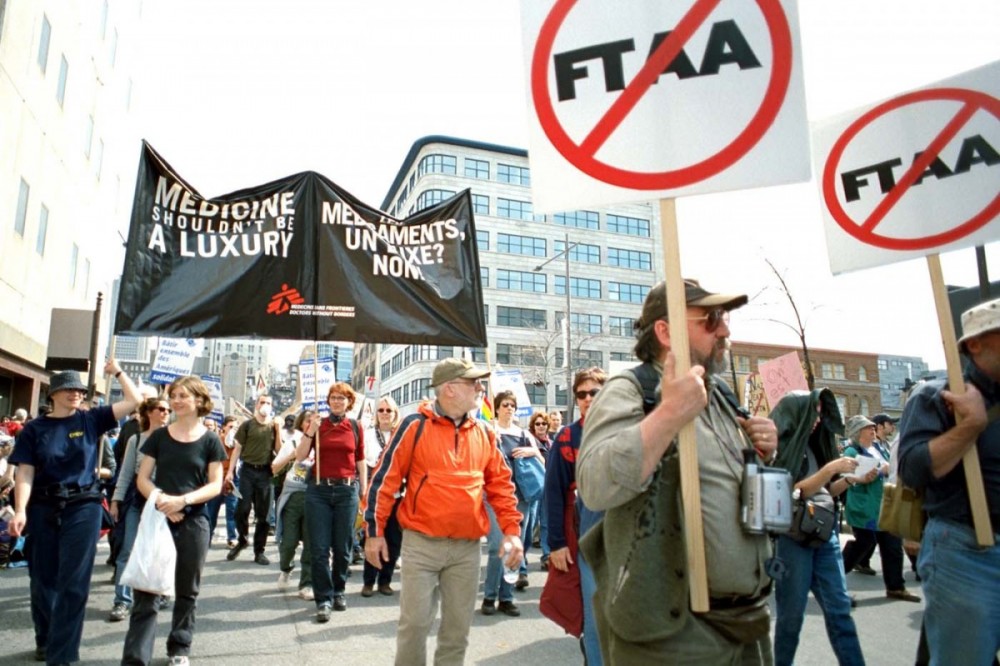 Don't believe Trudeau's hype: free trade agreements have nothing to do with an open, welcoming society. Belief in international cooperation, even in international governance structures like the UN, has little to do with corporate globalization. A world governed by free trade agreements is a world governed by corporate interests, where decisions about environmental and labour rights are made by people who prioritize profits over people.

Free trade agreements have chapters that talk about labour mobility, sure, but not because free traders believe in open borders. Big corporations like labour mobility so they can import cheap workers when they can't find local workers who are willing to work for peanuts.

And just because Trump is opposed to both open borders and NAFTA, it doesn't mean that we can't support the one and question the other. What kind of a world would Trumpism create? Crackdowns on immigrants, even more virulent racism, and an unequal economy not much different from the current one.

The "alt-right" vision for the U.S. and Canada isn't about good jobs with benefits here. It's about scorning cheap imports because they're made by foreigners, and paying poverty wages to make the same cheap stuff here at home.

IMAGINE A WORLD WITH TRUE INTERNATIONALISM

So, let's imagine an internationalism that rejects both Trump's narrow us-versus-them nationalism and Trudeau's reckless bet on transnational capital.

Imagine a world in which people have decent, well-paid work, and access to universal public services like health care and education, no matter where they live; where nations cooperate on environmental issues because they understand that the air and water transcend the borders we draw upon this earth.

Imagining such a world is the first step toward creating it.