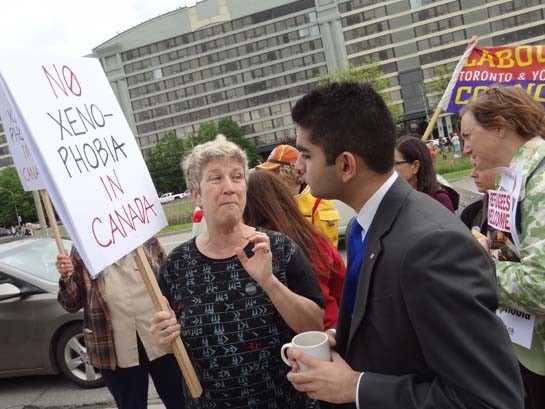 Canada doesn't believe in climate refugees. Like most countries, we have no legal framework to accept people displaced by climate change. Yet, climate change will displace hundreds of millions over the next decades. Sanctuary cities can offer safety and security to those excluded from refugee laws.

Sanctuary cities provide municipal services without asking for immigration status. They operate on a "don't ask, don't tell" policy: social service providers don't ask clients about their immigration status. If they happen to discover someone is without status, they don't communicate that to federal authorities.

The intention is to remove the fear of deportation that deters many undocumented immigrants from calling the police, or from seeking medical or legal help. Already among the most vulnerable, victims or witnesses without status will, for example, avoid reporting crimes. This adds an extra burden on women and children already facing abuse or sexual violence. Sanctuary cities also allow undocumented people to access housing services, libraries, community centres, and more.

In the U.S., 400 jurisdictions are part of the 40-year-old sanctuary movement. In Canada, the movement is far newer. Toronto became this country's first sanctuary city, in 2013. Since then, other municipalities have passed similar motions to provide sanctuary, including Vancouver and Montreal. Hamilton and London, in Ontario, have also done so, with dozens of other Canadian municipalities pushing to do the same.

It's not enough to pass a motion, though. Ryerson criminology professor Graham Hudson points out that Toronto has dedicated no resources to the effort since becoming a sanctuary city. City staff still routinely ask clients about their immigration status, and police routinely collaborate with Border Services to deport migrants.

Hudson urges sanctuary cities to provide resources and adequate training, and an assigned staff member to implement the policy in each service area. He also urges Toronto to follow the lead of many U.S. sanctuary cities by offering municipal identification cards to all residents, to ensure everyone can access city services without fear.

We are facing a global migration crisis: The United Nations High Commissioner on Refugees (UNHCR) estimates that there are more than 65.3 million displaced people around the world. That's twice the population of Canada — and the highest number of people fleeing their homes since the Second World War.

The crisis is escalating. The Syrian civil war, the largest contributor to displacement, shows no signs of ending. Mexico and Central America endure devastating rates of gang violence. South Sudan, Yemen, Somalia and Nigeria have recently been gripped by famines. Many others face extreme food shortages. (The U.N. declares a famine only when malnutrition rates exceed 30 per cent, or the death rate exceeds two people per 10,000 per day.)

Most of the 65.3 million displaced people are not refugees — not legally anyway. According to international (and Canadian) law, refugees are those fleeing from war, persecution, or violence across an international border. This definition does not account for displaced people who have been forced to migrate within their own country. What's more, it does not consider the environment or climate as a factor in displacement.

The UNHCR estimates that since 2008, 21.5 million people have fled their homes every year due to a sudden extreme weather event, such as a hurricane or earthquake. Thousands more fled due to gradual changes like prolonged drought, crop failures, or land degradation. Last year, rising sea levels swallowed five uninhabited Pacific Islands, part of the Solomon Islands. Nearby island nations like Tuvalu and the Maldives have long worried about a similar fate.

Scientists estimate that climate change will displace up to 200 million people by 2050, leaving them homeless, or stateless. Yet, since these climate refugees won't be fleeing war, violence or persecution, they won't be able to claim asylum in Canada or elsewhere. This is where sanctuary cities will be able to help.

It's impossible to know exactly how many people are living without documentation in Canada, but last November, Graham Hudson put the number at between 200,000 and 500,000. Canadian sanctuary cities are becoming more important than ever.

Since Trump's election, Canada has seen a sharp spike in undocumented migrants entering from the U.S. Immigration experts attribute this to the Safe Third Country Agreement, which prohibits migrants from applying for asylum in Canada from a country that is deemed "safe," like the United States. However, migrants can still apply for asylum from within Canada — if they can get here.

In the first two months of 2017, over 200 people endured Manitoba's harsh winter weather in order to enter Canada outside of the province's official border crossings. In February, 635 people crossed into Canada and claimed asylum in Quebec, a 600 per cent increase from that same period in 2016.

As climate change forces millions more from their homes, Canada will see a far greater influx of migrants unable to claim asylum. Like those migrants who have already arrived, many climate refugees will risk harsh conditions to get here. And many will live in fear of what could happen to them if they're found out. Declaring even more municipalities as sanctuary cities, and fully implementing the sanctuary policy of "don't ask, don't tell," would offer these refugees the protection they need, and the chance to access basic services without fear.