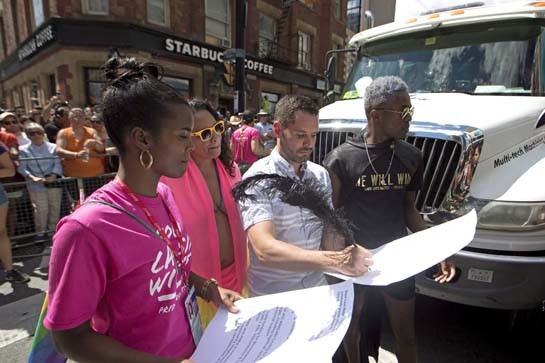 I am writing to you as a long-time resident of the Church and Wellesley neighbourhood, a long-time Queer and Trans activist, and one of Canada's few openly gay union leaders. I am calling on the Executive Board of PRIDE Toronto to honour its commitment to Black Lives Matter.

Let me start by saying, I love PRIDE in Toronto — in fact, I love PRIDE events wherever I attend them across the province. I am always brought back to my young teenage self, in rural Ontario, when I imagined there was no one else like me in the world. I love being in the middle of a celebration and affirmation of who we all are. I marvel at how Pride celebrations have grown everywhere. I love the ongoing push by folks over the last 15 years or more to ensure we remember the political roots of Pride while we celebrate. But to say that our festivities are perfect would not be accurate, and I think PRIDE Toronto has acknowledged that on many occasions.

It's critically important to remember our history. PRIDE was born out of the police persecution of Toronto's gay community. It is only 35 years since Toronto Police targeted the gay community by raiding our bathhouses, arresting us and outing many whose lives were irreparably damaged.

We have come a long way since then and if you are a white, gay male, like myself, you are much less likely to face police harassment today than you were even five or 10 years ago. The same can't be said for all LGBTQ+ folks. Just because things have improved for some of us doesn't mean we can be blind to the struggles of everyone in our communities.

Today, Toronto Pride is famous worldwide as a safe space to be open about one's sexuality and gender identity. It's a time to be loved without judgement, but this is sadly not true for everyone. Toronto's LGBTQ+ communities are as diverse as the world itself, and people have vastly different lived experiences.

While the parade and festivities continue to grow in mainstream popularity, it is becoming harder for people from all parts of our LGBTQ+ communities to organize events that reflect themselves and the reality of their lives.

Space in the festival has, for some years, been increasingly consumed by corporate donors who see us only as a market. I remember Pride festivals where only one beer company would allow its beer to be sold in the one beer garden that existed then; one beer garden because other companies didn't want to be associated with Pride. And frankly, I'm not that old.

The prevalence and focus on corporate donors has also greatly decreased our ability to continue to question ourselves about racism, ableism, transphobia, and all the other societal oppressions that affect LGBTQ+ folks.

I recognize you are receiving a lot of pressure to distance yourselves from the actions of Black Lives Matter during the parade on July 3. In the tradition of LGBTQ+ leadership in our city, don't give in to this pressure.

The pressure you're experiencing today is reminiscent of what allies and gay-friendly businesses received in the '80s and '90s to distance themselves from "overt" and "militant" homosexuals. A quick review of the news article from the early '80s will show that the vast majority were "defending police actions," regardless of our clear understanding that the fundamental rights of gay men had been violated in the bathhouse raids.

Black Lives Matter has successfully shone a much-needed spotlight on the institutional racism that exists within the police force toward racialized people in this city. The group is led by strong Black women who also identify as LGBTQ+ and the concerns they raise about not feeling safe surrounded by such a large police presence is a valid concern felt not just by Black members of our community.

There is perhaps a compromise to be found in not denying individual LGBTQ+ police officers their right to march in the parade. After all, they are members of our diverse communities too. LGBTQ+ officers face significant harassment and discrimination within their own forces and we must be there to support them.

There is, however, a big difference between the participation of these individuals and a several-blocks-long procession of police vehicles from multiple forces, with hundreds of uniformed officers. Such a presence promotes institutions that continue to oppress and discriminate against a large swath of folks in our communities. Many people were uncomfortable with this — not just Black Lives Matter.

And, Black Lives Matter's action at the PRIDE parade was about so much more than just the overt police presence. It was about the need for enhanced community input, about funding and support for culturally diverse space and events at PRIDE, about ensuring that staffing reflects all of those that make up our diverse communities.

PRIDE Toronto has an important role to play on behalf of a very diverse group of LGBTQ+ folks throughout the city.

This is a very critical moment for us all. In the strongest way I can possibly imagine or muster, I am asking you to stand with the thousands of Toronto LGBTQ+ people who are still struggling for equality.

A lot of great articles and commentaries cross Our Times' editorial desks from the internal union press in Canada, and we figure they deserve a wider, public audience, as a way to build the movement for workers' rights and social justice. That's why we've launched our new online series, Best of the Union Press.

This third instalment is from CUPE Ontario (Canadian Union of Public Employees). CUPE Ontario president, Fred Hahn, wrote an open letter to the executive board of PRIDE Toronto, asking them to honour the commitments made to Black Lives Matter during the Toronto march this year. Those commitments include the removal of police floats and booths from all Pride marches, parades, and community spaces.