A Is for Activist

An Interview with Kyle Buott 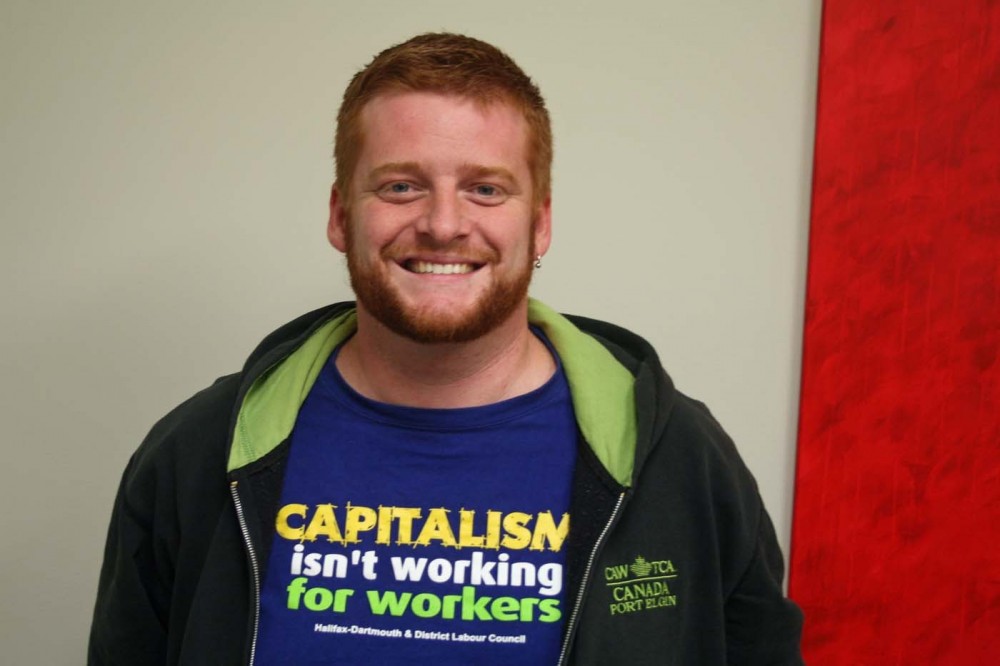 “I think unions are at our best when we try to speak for the entire working class,” says activist Kyle Buott. PHOTOGRAPH: LORRAINE ENDICOTT

Red is the colour traditionally associated with socialism, and red is the colour of Kyle Buott's hair. It's a convenient coincidence for the young organizer, a recognizable figure at many a demonstration or left-leaning political event in Nova Scotia.

He is president of the Halifax-Dartmouth & District Labour Council and secretary-treasurer for the Nova Scotia Federation of Labour — the culmination of an interest that developed in his high school years.

"I was a member of the Young NDP and when I was around 15, I started attending labour council meetings to help develop a better relationship between the labour movement and the party," recalls Buott.

By the time he was 18, he was a union member for the first time. "I was working in an office job, covering a maternity leave for the Council of Canadians," he says, "and that's when I became a member of the Canadian Auto Workers (now Unifor), and then a delegate to the labour council. About a year after that, I joined the executive as the sergeant-at-arms. Then, in 2008, I became president of the labour council."

Buott attained a leadership role in the local labour movement at a rather young age, something he regards as having been helpful to his work in re-energizing the labour council.

WORKING FOR WORKERS
"Having a younger leader of the labour council meant we were able to draw in younger folks, and so the average age of labour council delegates dropped from about 55 to about 35," says Buott, now 27.

"At some points we've even had teenagers and people in their early 20s, as well. That's been fantastic. We also, in response to the recession, adopted the slogan 'Capitalism Isn't Working for Workers,' and that served as a rallying point for people on the left in the labour movement; people who actually wanted to build workers' power in our city."

Buott is quick to point out that rebuilding the labour council's presence has been a group effort.  "A handful of us, mostly younger folks, got together and said we would do that work." Since then, he says, "a bunch of incredible activists have, together with me and the rest of the executive board, built up the labour council over the last few years."

The kind of NDP/labour movement crossover that helped motivate Buott to become an activist was on the wane by the time he was elected president of the labour council. Indeed, the council's executive was significantly to the left of the Darrell Dexter-led Nova Scotia NDP government on a variety of matters, observes the self-described socialist.

"Certainly, I have both criticisms and compliments for the NDP about its time in office. On the whole, I think it was a bit of a disappointment to many of our activists and that's created a gap between the party and the labour movement." 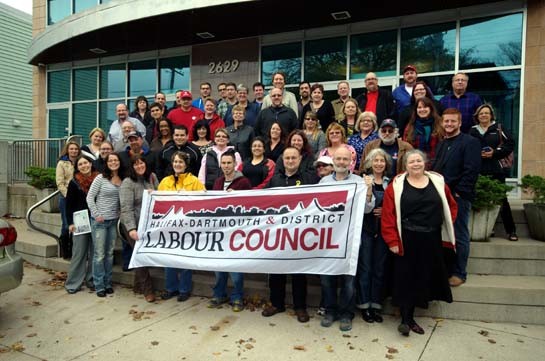 Narrowing down the precise issues where that Nova Scotian disconnect developed leads Buott to a more widely applicable analysis. "Business unionists believe the labour movement's goal is simply to protect our members and get our members wages and benefits and things like that. Social-union trade unionists see the labour movement as an organized force of the working class, fighting for workers whether they're in unions or not."

He suggests social unionism has more general appeal and relevance than business unionism, particularly in times when people are struggling to find regular work. "I think that's when unions are at our best: when we're trying to speak for the entire working class and not just a small section that happens to be our members."

This broader view is reflected in the connections the labour council has made with groups such as ACORN, the Halifax Media Co-op, and other community-based organizations.

"We've been providing logistics and support to ACORN, a group that organizes low- and moderate-income families in Nova Scotia," says Buott. "We've also been supporters, for a long time, of the Halifax Media Co-op, which brings a grassroots view to Nova Scotia's media. And, of course, we continue our work with the Canadian Federation of Students and other organizations, like Solidarity Halifax, as a way of connecting the labour movement to the broader community."

A BIGGER VISION, A BETTER SOCIETY
By expanding the range of issues they address, unions not only speak to a larger and more diverse audience — they also become more sustainable. Buott notes it's not uncommon for community-based activists who aren't union members to later find themselves employed in unionized workplaces.

"The key is having those relationships, so that when the same people do become union members, they see their union as a way to get active in a social struggle against capitalism and against austerity."

It's a more radical view of unions than some may be used to, and Buott says that's exactly the point. "Collective bargaining is important, but it's not the be-all and end-all. We have to be working to change the world that we live in, as a way of building a bigger vision and a better society." He adds, "I would call it socialism."

While some may find the term polarizing, the Dartmouth, NS-born organizer likes what it signifies. For Buott, socialism offers a framework for understanding socioeconomic phenomena, while remaining open to individual interpretation.

"I see it as a way of talking about an alternative, and no one's talking about the 'socialism' of Russia or China — that's not socialism in my mind," Buott clarifies. "Socialism," he says, "is about moving beyond capitalism. It is about acknowledging that capitalism has concentrated the wealth of our society in a tiny group of people — what the Occupy movement called 'the 1%.'"

Adds the labour leader, not known to mince his words, "I usually use the terms 'the working class' and 'the ruling class.'"

CORPORATE SOLUTIONS A CROCK
It was back in 2002 to 2003 when Buott first got political. He says watching news coverage of the U.S.-led invasion of Iraq convinced him to become involved with the newly created Halifax Peace Coalition. Like many other Canadians, he was outraged by the attacks, which he describes as having been "illegal" and "all about growing profits for oil corporations." It was time to take action.

"As a result of demonstrations in cities across the country, the Liberal government of the time decided not to send Canadian troops to Iraq," recalls Buott. "It was a huge win, and it showed me that organizing and taking collective action works."

A high school student at the time, he subsequently completed the Foundation Year Program at the University of King's College in Halifax, and then started an economics degree at Dalhousie University. That was soon abandoned, even as Buott's knowledge of the subject was expanding in other directions. "The Canadian Centre for Policy Alternatives, a progressive economic think tank, certainly opened my eyes to a broader range of economic theories."

Interviewing the articulate Buott, one suspects the conservative and oft-criticized field of academic economics wasn't too much for him — on the contrary, it was too little.

His degree fell by the wayside and he accepted a full-time position with the Nova Scotia Citizens' Health Care Network, coordinating provincial efforts to stem the intrusion of privatized, for-profit medical services.

He remained in the role for six years, before he took a little time off to assist with other political organizing work. Buott helped with a municipal election campaign, followed by a provincial one, and soon ended up elected himself — as the secretary-treasurer of the NS Federation of Labour. It's now been three years since he accepted the position.

Nova Scotia has a highly publicized problem with retaining young workers. Buott admits that he could easily follow the well-beaten path west and find better wages than he's liable to earn if he stays in his home province. But that doesn't matter to him.

"I plan to make Nova Scotia my home for the rest of my life," he says. Buott recently became co-owner of a small hobby farm outside Halifax, which is where he lives. 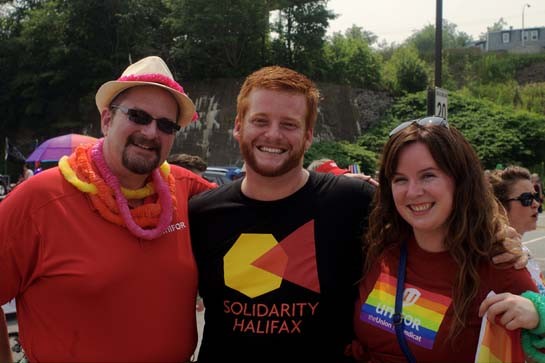 However, he's no believer in top-down approaches to local economic development and worker retention as described in the much-touted Ivany Report, released in February 2014 by Acadia University president Ray Ivany and a five-member panel. He calls that plan "a crock of shit" for its predictable reliance on attracting international investors and capital to Nova Scotia.

"It hasn't worked and it's not going to work — and that's not how to keep young people here," he sighs. "We have to push back against this idea that capitalism can somehow develop the economy here, because it can't. We have to look at other models."

Buott is happy to present a sampling of ideas that could benefit Nova Scotia as an economic entity, and also the lives of its individual residents. "I would consider things like public ownership of Nova Scotia Power, and investing in cooperatives and non-profit business. There are ways of building an economy that are not about creating profits for large international corporations."

The words "progressive" and "sustainable" are front and centre in Buott's discussion of why public ownership of  "key industries" (e.g. oil and gas, telecommunications, forestry, and electricity) trumps ongoing "corporate welfare" and welcoming questionable developments like fracking.

"I think Stephen McNeil and the Liberal Party, just like the Conservatives before them, represent the interests of Nova Scotia's ruling class. They are going to continue the same failed economic development policies we've had for the last 30 years."

The current provincial Liberal government isn't bringing anything new to the table, just "cosmetic change," continues the former economics student. "At the end of the day, large cheques are still going to be written to large corporations."

"We go through almost every government budget line," he says of the process behind the alternative budget. "We make cuts; we create new programs. It's a very interesting exercise in popular and democratic economics."

But don't mistake the labour council president for someone who stands by any given political party or who faults people who choose not to vote. "I'm a member of the NDP, but I always say I am a socialist, not a New Democrat," he laughs. "I believe that change actually comes from mobilizing people on the ground."

FLOCKS, FRIENDS, AND THE FARM
Speaking of the ground, that is literally where Buott returns to whenever he can to recharge from his demanding schedule. The organizer tends a garden, a small orchard, and numerous geese, ducks and chickens on his 10-acre West Hants farm.

His objective isn't bringing produce to market, although the first-generation farmer notes that Red Shire Farm certainly yields fruit, vegetables, meat and eggs. "Physical labour is good for you, no matter what," Buott says. "Sometimes I have folks out, and that's a big help. It's a bit more land than I can manage on my own." He also hosts occasional bonfires and educational workshops on his land, which give him a sense of satisfaction, too.

The physical rewards of hands-on agriculture, combined with good company and ample sleep every night, is the activist's recipe for avoiding burnout.

"I have some amazing friends and comrades in the labour movement, and the broader social movement, too," he says, "and that support network is extremely important when you're doing organizing work." Kyle Buott is in it for the long haul.

This article originally appeared in 2014/2015 of Our Times Magazine. Support our work by subscribing, advertising, or donating today!