Green is Not White

Environmental Justice for All 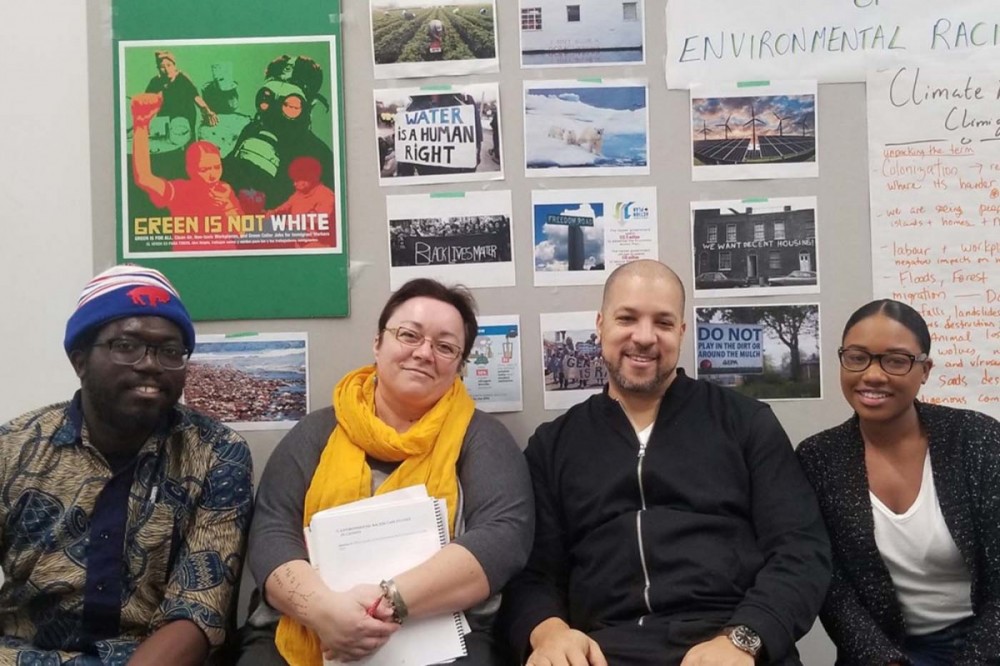 “A way to make people feel more inclined to get involved in environmental justice work is to change the face of it — the face of it needs to reflect the communities that are being lived in,” said Sarah Jama of the Hamilton Transit Riders’ Union (HTRU) to a room filled with community activists, students, and residents of Hamilton, Ontario, at the workshop presentation Green is Not White, held on February 26, 2019.

The seven-hour-long workshop was hosted by two Hamilton-based organizations, the Hamilton Centre for Civic Inclusion (HCCI) and Environment Hamilton, in partnership with Adapting Canadian Work and Workplaces (ACW) and the Coalition of Black Trade Unionists, Ontario Chapter (CBTU Ontario). Held in the Hamilton Public Library’s Wentworth Room, the workshop was led by CBTU Ontario’s Christopher Wilson, HTRU’s Sarah Jama, HCCI’s Kojo Damptey, and Kerry Bear of Environment Hamilton. The workshop was part of a larger initiative to bring together unions, community organizations, and academic researchers to collaborate on environmental and climate change issues. 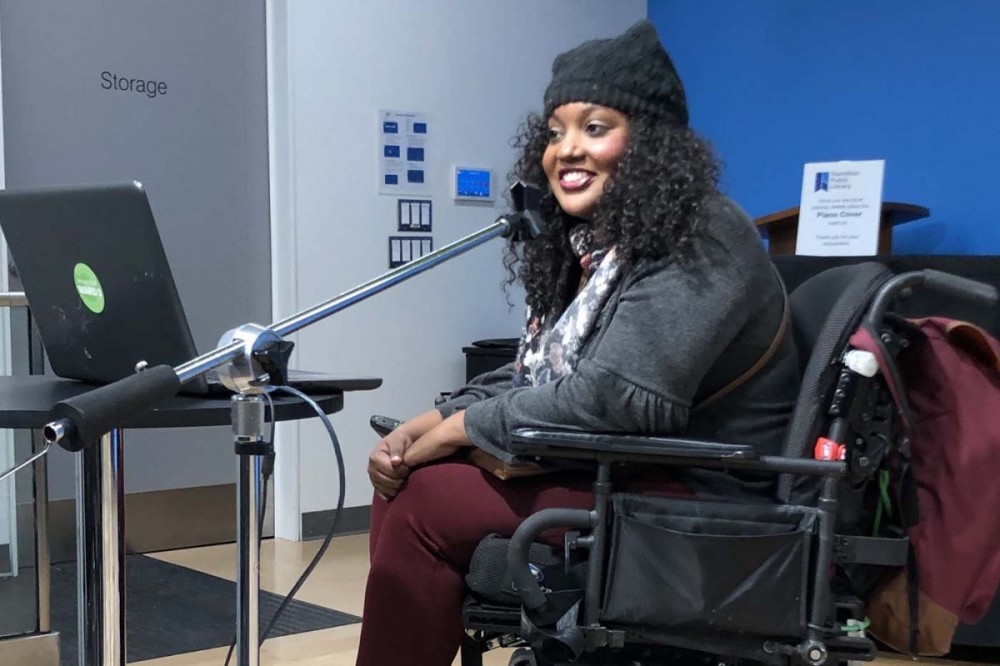 Sarah Jama, a community organizer from Hamilton, Ontario, is co-founder of the Disability Justice Network of Ontario. PHOTOGRAPH: SHANICE REGIS

A goal of the workshop was to bring cases of environmental racism closer to home by providing local examples and give participants the tools to identify environmental injustices in their own homes, communities, and workplaces. Participants were asked to break into groups and work through various case studies that demonstrated one or more forms of environmental racism. Several participants identified the persistent problem of gentrification in communities with predominantly racialized and low-income people across the Greater Toronto and Hamilton area. Gentrification is a process of carrying out large-scale renovations in deteriorated urban areas, in part to attract more affluent residents to these areas. Participants noted that new housing developments and transportation-infrastructure projects in Hamilton’s North End have been displacing residents and leaving many exposed to environmental toxins because of dirty industries in that area.

The name “Green is Not White” suggests that the role race and racism play in environmental and climate issues in Canada has been poorly understood and speaks out against an environmental movement in which the decision-makers are predominantly white. The name also highlights the importance of shifting away from an environmentalism that sees nature as something separate and apart from human systems, to environmental justice and climate justice — a movement that addresses the root causes of environmental degradation by advocating for systemic change that includes social, economic and racial justice. 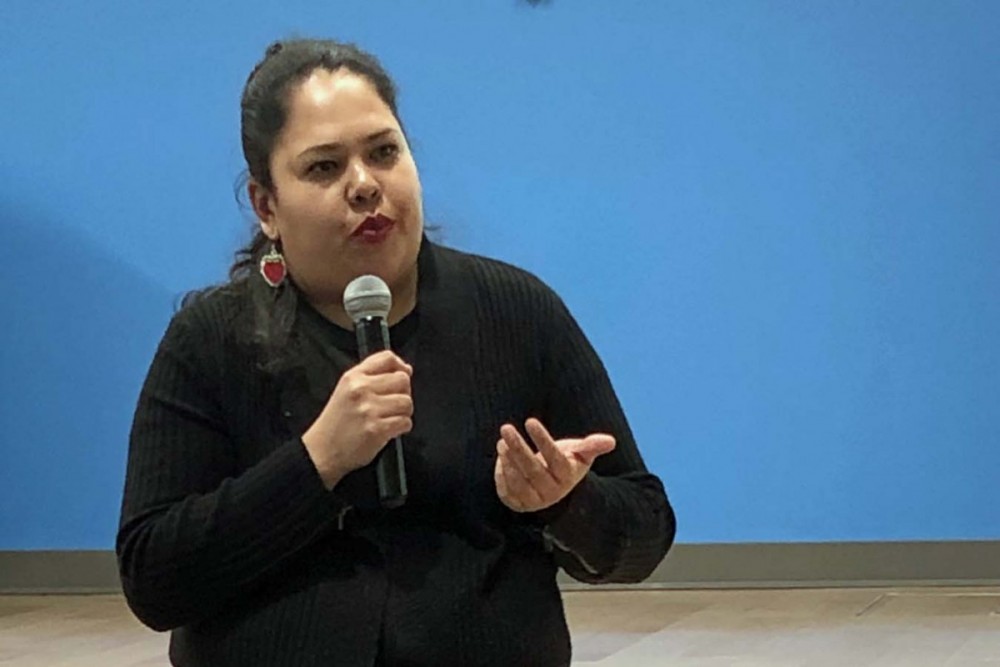 How do we build “relationships with each other as human beings?” asks Danielle Boissoneau, of Garden River First Nation. “How are we able to rely on each other? What does a community of care look like?” PHOTOGRAPH: SHANICE REGIS

Further, it recognizes that Indigenous environmental issues are unique and require Indigenous voices if we are going to transition to a more sustainable green economy. To drive home this message, Anishinaabe guest speaker Danielle Boissoneau, of Garden River First Nation, spoke about the resilience of Indigenous peoples in the face of environmental genocide perpetuated by Canadian governments — from the poisoning of their land and water to the forcible removal of Indigenous peoples from their homes. She also discussed her role in helping to organize the Hamilton Harbour Water Walk, which brings awareness to the environmental issues happening in the harbour. According to Boissoneau, in 1996 the International Joint Commission described Hamilton Harbour as “one of the most polluted places in North America.” She further mentioned that the high levels of phosphorous in the water have made the harbour unsustainable for wildlife and for human consumption. She spoke vehemently about the need for Indigenous people and allies to unite our struggles and build community as the basis for our environmental work.

“Our oppressions are all connected and we can form unity based on a common oppressor; [the oppressor] looks different to everyone as we face our struggles . . . but they are really the same,” she said. “I’m [interested] in how we are building relationships with each other as human beings. How are we able to rely on each other? What does a community of care look like? That’s the kind of work that I’m really interested in. Because at the end of the day when we’re fighting and we’re tired and we can’t rely on each other to hold ourselves up, then [the oppressor] has won.”

Shanice Regis is an organizer with the Public Service Alliance of Canada (PSAC).

To find out more about upcoming Green is Not White workshops, visit ACW (Adapting Canadian Work and Workplaces to Respond to Climate Change). To participate, send an email to Christopher Wilson.