Through Tear Gas and Time 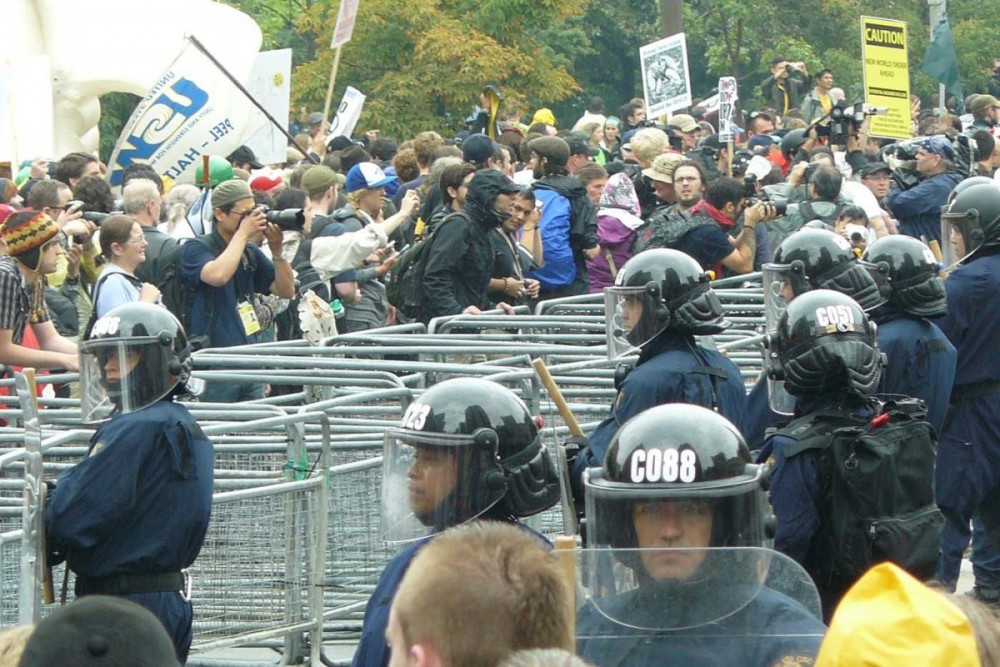 Given the global pandemic and the subsequent, and as yet incalculable, loss of lives and livelihoods around the world, and the killing of George Floyd, which sparked a global uprising in support of Black Lives Matter we can all be forgiven for focusing solely on 2020. But this summer is a good time to look back 10 years ago to the summer of 2010, when the G20 came to Toronto. In many ways, the actions of the police forces then foreshadowed the brutal actions of so many police forces in the decade since.

That summer, more than 20,000 police and military personnel poured onto the streets of Toronto, including the Toronto Police Services (then under the command of Bill Blair), the Ontario Provincial Police (OPP), the army, and over 5,000 members of the RCMP. In addition, police officers from Newfoundland and Labrador, Edmonton, Calgary and elsewhere were shipped to Toronto to provide assistance to the local force but also to “learn.”

What did they learn, you wonder?

For one thing, over 100 police officers learned that they could remove their name tags before indulging in grossly inappropriate uses of force like kicking and beating protestors, or kettling protestors and passers-by. Removing their name tags was a blatant violation of Toronto’s Police Services Board policy — a policy that the police had resisted before the civilian board was able to have it mandated in 2005.

As former Board chair Alok Mukherjee notes in his book Excessive Force (which is a must read!), the end result of this deliberate and flagrant act of arrogance, which also suggested premeditated violence and brutality, was that police were asked to report themselves for their violation of policy and were docked vacation pay for one day. Police also learned that they could stop, search and threaten to arrest anyone passing by.

I know this to be true as I was stopped and searched so many times that I lost count during the week of civil society actions held during the G20 meetings. I remember getting into arguments with cops who believed they had been given extraordinary powers by the province through the Public Works Protection Act. On Thursday, June 24, 2010, I was stopped by police near where I lived at the time, in the heart of downtown Toronto and asked my business. When I protested — politely — I was taunted with the line “what are you, a lawyer or something?” 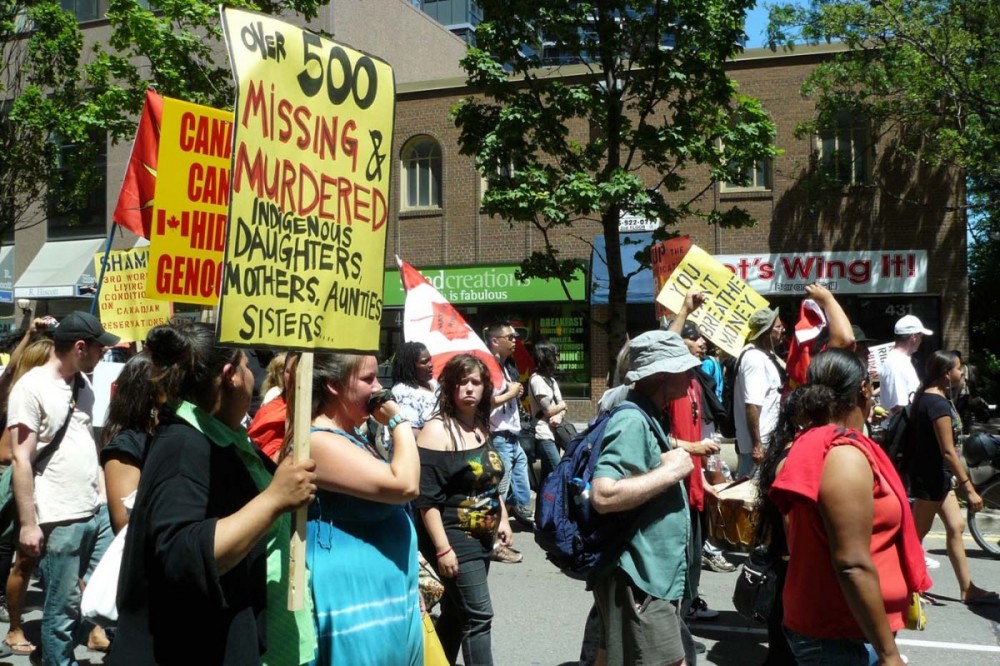 Over 1,100 people were arrested that weekend — the largest mass arrests in Canadian history. Most had their charges dropped over the next few weeks and months as the grim reality of how they were arrested, and treated after their arrest, dominated news headlines. (See Lisa Walter’s article, “When Journalists Become Prisoners: Diary of a Detention,” Our Times Vol. 29, No.4.) One of the memories seared into my mind is rain-sodden protesters and random passers-by sitting down and singing “O Canada” as they were being kettled by police. I saw two dog-walkers walk through clouds of tear gas and get arrested. Later I heard one of them was held for over 36 hours.

I am still appalled, a decade later, at the gendered violence of denying women prisoners menstrual supplies and privacy at the deliberately dysfunctional “processing centre” set up on Eastern Avenue. And of course, perhaps the most famous and most caricatured moment of the G20 was “Officer Bubbles” captured on video threatening to arrest a woman “for assaulting a police officer” if one of the soap bubbles she was blowing touched him. 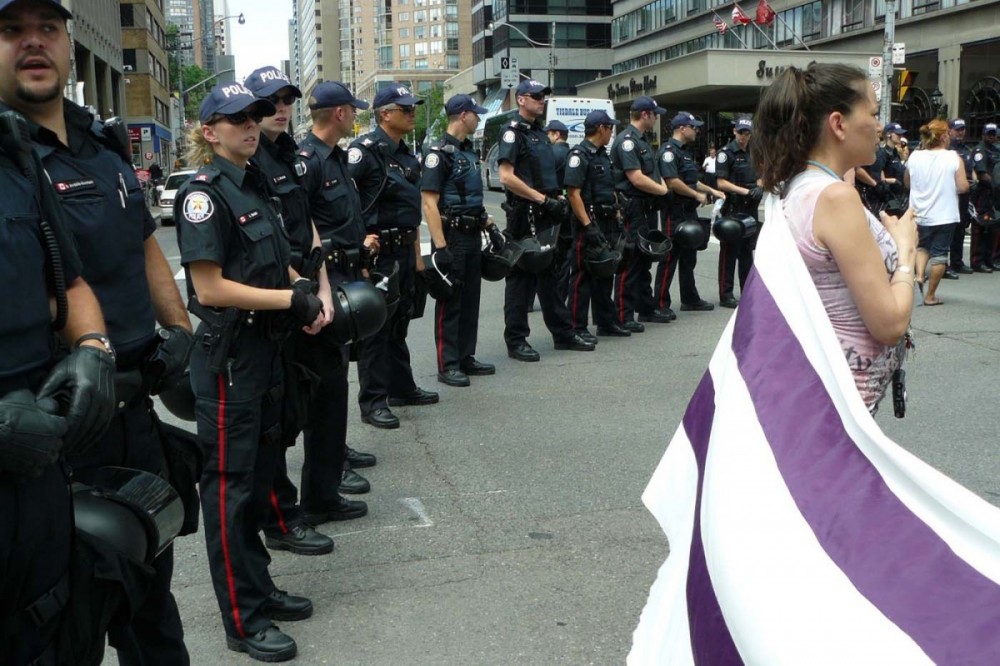 It’s important, I believe, to make the connections between then and now about policing and politics. Ten years ago, the G20 exposed the brutality of the police and their hostility to civil liberties. It’s important that we remember that then-Toronto police chief Bill Blair — who famously battled with the civilian oversight board over carding, for instance — is not just any minister in Justin Trudeau’s government, but that he is responsible for the RCMP.

Not a Shock for Those Marginalized

What we saw on the streets of Toronto in 2010 shocked many people; for the first time, many who, until then, had not had any reason to confront the racism and the arrogance of police, saw it for themselves. Yet, police have always brutalized Black and Indigenous people, in particular. That said, for all those who have been on the margins of society, because they are racialized, Indigenous, poor, vulnerable, suffering from mental distress or, more dangerously, fall into a number of these categories, nothing about this was a shock. We have known for decades that the experiences of mainly white, mainly middle-class and rich Canadians at the hands of police are very different from the experiences of those who are seen as powerless.

But the summer of 2010 was — like the summer of 2020 promises to be — another moment in time when the world was briefly forced to see what it’s like for those whose interactions with police are always fraught with danger and liable to become life-threatening at any given moment.

Despite the many videos and reports and inquiries, very little changed in the aftermath of the G20. A handful of low-level cops were docked a day’s pay; a couple of senior officials were reprimanded or lost accrued vacation or overtime pay; and Blair’s reputation was tarnished (but obviously, not for long). But 2020 is not 2010; there is yet hope that 10 years from now, we will have learned how to move past policing as the blunt tool that it is. In 2030, I don’t want to look back at this summer with the same regret, anger and disbelief with which I now look back at 2010.