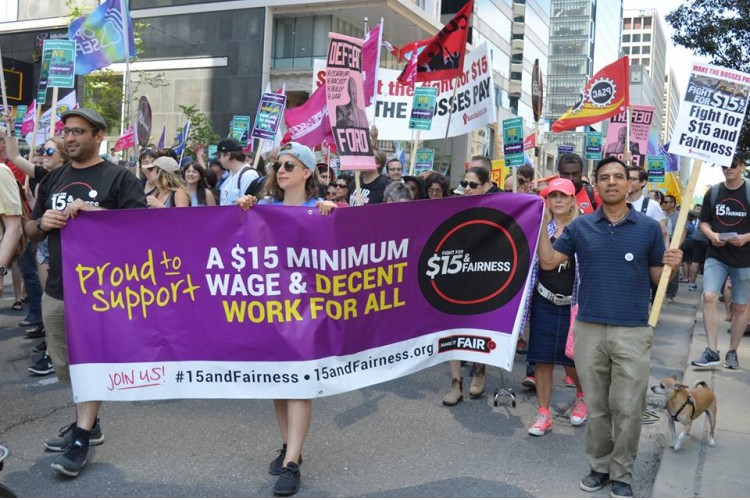 A heat wave didn't stop over 1,500 labour and community activists from joining the Rally for Decent Work on June 16, in downtown Toronto. Organized by Fight for $15 and Fairness and the Ontario Federation of Labour (OFL), the rally was the first major public demonstration since Conservative leader Doug Ford was elected premier.

The Fight for $15 and Fairness movement and the OFL planned the rally months before the Ontario election, knowing that the labour movement would need to put pressure on whichever party formed government, in order to defend and extend the labour law reforms won with Bill 148, the Fair Workplaces, Better Jobs Act.

Ford's promise to cancel the $15 minimum wage, due to be instituted in January 2019, has alarmed labour and community organizers. It looks like Ford's plan to find $1 billion in “efficiencies” will mean rolling back workers' rights, cutting public services, and selling off our public assets to private, for-profit companies.

“We must never let Doug Ford forget that he has no mandate for an austerity government,” said writer and climate activist Naomi Klein to the massive crowd of concerned citizens. “[He has] no mandate to cut funding for health care. No mandate to cut public services.” Rally signs exclaimed: “Message to Doug Ford: We are the People” and “Hands off union rights.”

Low-wage worker Yvette Leclair spoke about the all-too-common experiences that accompany precarious work: no sick days, no time off, unpaid breaks, and last-minute changes in work schedules, to name just a few. Leclair was one of the many organizers who did the critical work that won the reforms in Bill 148, including petitioning, lobbying, rallying, and working phonebanks. And the movement isn't stopping now. 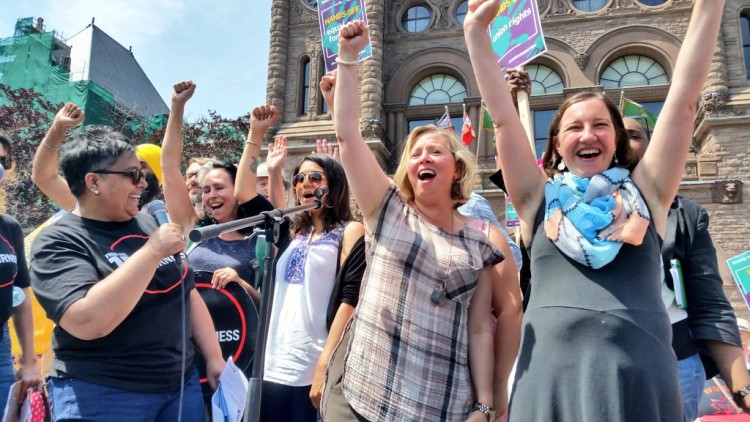 Workers' Action Centre organizer Deena Ladd spoke about the key battles to come — one being to enforce equal pay for equal work, a struggle that has been led by part-time and contract faculty in Ontario's colleges and universities.

The rally also featured newly elected members of provincial parliament who declared their support for the movement. Twenty-eight new and returning MPPs signed the pledge to keep fighting for $15 and Fairness and to take on the big business lobby.

As a student who has been organizing in the Fight for $15 and Fairness movement for three years, I was thrilled to be a part of our biggest rally yet. The future is uncertain; we're not sure whether Ford will attack our movement now, or in a year's time. Either way, if we suffer a defeat by Ford, I'll still be proud of the relationships we've built — of the many young and racialized, unionized and non-unionized workers who have united together. Our movement has drawn new workers and allies into the struggle, activists who will be crucial to building future movements.

As Idle No More activist Crystal Sinclair told the thousands of marchers that day, “The power of the people is stronger than the people in power.” Sign up for campaign updates.

Alia Karim is a PhD candidate in the Faculty of Environmental Studies at York University. She is president of the York University Graduate Student Association (YUGSA), in Toronto, and an active organizer with the Fight for $15 and Fairness campaign.