Standing Up For Economic Equality 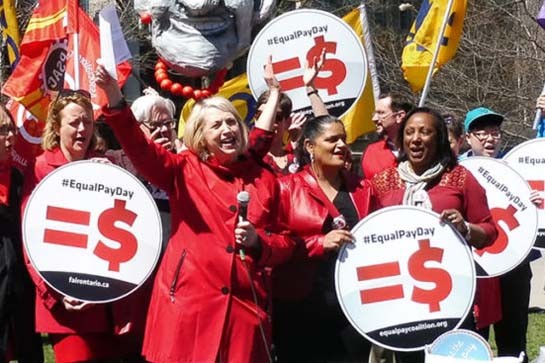 In the 1970s and '80s, women in the labour movement fought to end pay discrimination and close the gender pay gap. Still, today, thousands of women in their unions and community organizations find the fight for pay equity and women's economic equality is far from over.

Nancy John, president of Ontario Public Service Employees' Union (OPSEU) Local 161, knows the impact of the gender pay gap firsthand. She took on the undervaluing of her work and has won some battles. But she agrees the overall fight is by no means won.

For over 30 years, Nancy has worked as a community support worker at Community Living Tillsonburg, a small agency in southwestern Ontario. Each day she and her co-workers, almost all of whom are women, take care of over 80 adults with developmental disabilities. The clients live in homes where they work on their skills to lead as independent a life as possible. Nancy has been active in her union for years. She has fought to have her work fully valued. She witnessed the attempt to enforce pay equity in her workplace.

In 1994, a pay equity analysis of her workplace was done, and it showed that Nancy and other women in her workplace were being paid anywhere from $3.60 to $14.96 per hour less than men doing work of similar value. Today, Nancy's pay still remains about $12.27 below the pay equity male target wage. If her employer had got his way, she would not have received any pay equity adjustments.

One major barrier to winning pay equity, Nancy John says, is how people dismiss work like hers as being that of a "glorified babysitter," which shows how badly women's work is undervalued.

"I have a college diploma. I'm expected to act as a professional, taking care of my clients' needs and lives, day in, day out," she says. "I am the one responsible for planning a life with my clients. We set goals, plan meals, travel together, go to the movies — all activities of daily life. I'm there to care for them and to help them achieve their own personal goals, large or small." Moreover, she points out, "the families expect us to be the constant support."

Nancy and her co-workers aren't alone in facing a gender pay gap. Across Canada, on average, women earn roughly 70 cents for every dollar a man earns. This is an average gender pay gap of about 30 per cent. But this "average" figure doesn't capture the depth of the discrimination and inequality of working women's experiences. The gender pay gap for Indigenous women is approximately 57 per cent. Racialized and immigrant women face a gap of 37 per cent to 39 per cent. Women who are recent immigrants earn 57 per cent of what a white man makes in similarly valued occupations. Women with disabilities face a 46 per cent pay gap.

That gap reflects real dollars that have a real impact on women's lives. A 30 per cent wage gap looks like this: a woman works all year long, but, after mid-September, she works for free. Over a 45-year working career, that is like for working for 13 years for free.

The gender pay gap expands because of how women experience barriers to gaining access to secure and predictable decent work and pay. Over the past two decades, cutbacks in government spending (because of austerity agendas) have taken their toll on women's wages. They have also caused women to have to fill in the gap, caused by reduced public services, through their unpaid care-giving labour at home. Unionization rates have declined, particularly in the private sector, which means women lose access to higher-paying jobs.

And the growth of precarious work — those part-time, contract, temporary and casual jobs — deepens the gender pay gap. Women are over-represented among these vulnerable workers, making up 70 per cent of part-time workers and over 60 per cent of workers who earn at or near the minimum wage.

SURELY THE GENDER PAY GAP IS AGAINST THE LAW?

Pay equity laws represented important progress towards equality. They went beyond the existing framework of "equal pay for equal work" to a framework that ensured that women and men were paid equally for work of similar value, even if their jobs were not identical.

The right to pay equity has been recognized for generations:
* In 1972, Canada ratified the International Labour Organization (ILO) Convention 100: Equal Pay For Work of Equal Value.

* After intense lobbying by women's organizations and unions, in 1985 the federal government introduced protection for the right to equal pay for work of equal value in the Canadian Human Rights Act.

Over the next decade, pay equity laws were introduced in most provinces:
* In Ontario and Quebec, the pay equity law applies to both the public and private sector, and it allows almost exclusively female broader public sector workplaces to compare wages with larger publicly funded institutions that deliver similar services.
* Four provinces — Manitoba, New Brunswick, Nova Scotia, and Prince Edward Island — have a specific pay equity law which applies to the public sector. Saskatchewan, Newfoundland, and British Columbia developed policy frameworks for negotiating pay equity for public sector employees.

Nancy John works at a broader public agency that, under the Pay Equity Act, is given leeway to phase in pay equity slowly.

As Nancy points out, "Ontario's pay equity law only requires my employer to make annual adjustments at one per cent of total payroll." That means her gender pay gap of over $12 per hour only gets closed at a rate of 20 cents each year. Nancy has already been waiting 23 years for discrimination-free wages. She says "at this rate, I will be retired before women in my workplace achieve the same rate as the male job of equal value." The existing law just is not strong enough to deliver the redress women like her need.

To make matters worse, in 2010 her employer simply stopped making the legally required pay equity adjustments. Nancy and her co-workers were owed close to $1 million in back pay for pay equity. 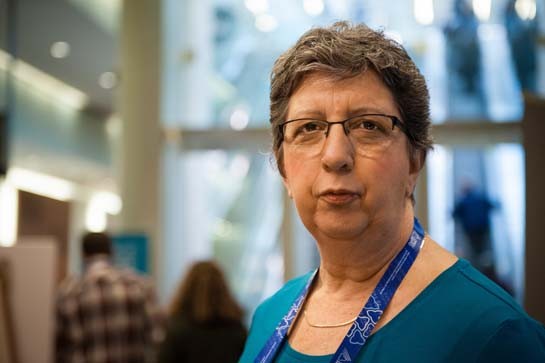 Community support worker Nancy John knows what it means to have to fight for pay equity. PHOTOGRAPH: ROSE HA

Employers can't contract out of their pay equity obligations and the tribunal would not accept the employer's "inability to pay" argument. Still, the employer refused to pay up. He threatened layoffs. At the centre's annual Valentine's Day celebration, he read out a letter to the residents' parents saying he didn't have enough funding and would cancel services. He lobbied the government to repeal the Pay Equity Act provisions that applied to his workplace.

Nancy's union threatened to take the employer to court for contempt, meaning he and the board members could be ordered to pay or go to jail. Suddenly, her employer found the money to pay up.

Nancy is thrilled that the union members are starting to receive their money. But at the same time she is frustrated and angry. Members in her local died before the money they were owed was paid. Her members' lives have been put on hold waiting for what they were owed. As the local president, Nancy received calls from members facing desperate financial situations. Some were owed as much as $10,000.

Pay equity has made a real difference in the workers' lives. While still waiting for their pay gap to be fully closed, the workers are finding that 2017 payout is helping them make ends meet. Some can now afford to start paying off their student loans. One member is using the payment to fly to see a sick, aging relative in her home country, something that was impossible to consider doing while her employer withheld her pay equity monies.

Still, as Nancy points out, it will take another generation to close the pay gap in her workplace.

Women, through their unions and in their community organizations, are re-energized and are re-mobilizing.

The Ontario Pay Equity Coalition is calling for concrete goals to help close the gender pay gap once and for all. One law will not close the gender pay gap. Urgent government action is needed across many areas. With this in mind, the coalition has developed a plan called 12 Steps to Close the Gender Pay Gap. This call to action includes increasing the minimum wage to $15 per hour; improving access to collective bargaining; and instituting a universal affordable, public, national childcare program, as key tools for building women's economic equality. It also includes protection from precarious work.

In 2014, the Ontario coalition successfully lobbied the Ontario government to declare an annual Equal Pay Day in April. These annual Equal Pay Days represent an important way to raise awareness about the gender pay gap and to ignite action to close it. Women across the province wear red at their workplace. They hold "lunch'n learns" at their workplaces and libraries. They organize social medial thunderclaps. They leaflet on street corners. They march and they rally. They lobby at the provincial legislature and meet with the Minister of Labour.

Coalitions are reinvigorated across the country. According to Johanne Perron, executive director of the ,a href="http://www.equite-equity.com/home.cfm"target="_blank">New Brunswick Coalition for Pay Equity, lobbying and research continue to put pressure on the government to adopt pay equity legislation for the private sector and to properly value women's caring work as childcare workers, home-support workers, and workers in special care homes, transition homes, and community residences such as the one where Nancy John works.

In Alberta, a petition is spreading across the province calling for a new Pay Equity Act. In Ontario, the Equal Pay Coalition is calling for a new Pay Transparency law. This law would require annual mandatory reporting by private and public sector employers to the Ministry of Labour on the state of the gender pay gap in their workplaces, by individual classification and job status.

The inspiration for this new law is international, with Australia, the United Kingdom, and soon Iceland, already having such legislation.

In late 2016, the federal government announced it would introduce a new pay equity law for workers in the federal jurisdiction in 2018, but so far there are no signs of action. The Canadian Labour Congress, in coalition with women's organizations, lobbied the federal government for quicker action and the CLC continues to press for a national childcare program.

Moving from a 30 per cent gender pay gap to zero per cent will take a tremendous effort. But if women like Nancy John have anything to say about it, we will win, and the gender pay gap will no longer exist.

Jan Borowy and Fay Faraday are the co-chairs of the Ontario Equal Pay Coalition. Both are human rights and union-side labour lawyers in Toronto.