No Fare Is Fair 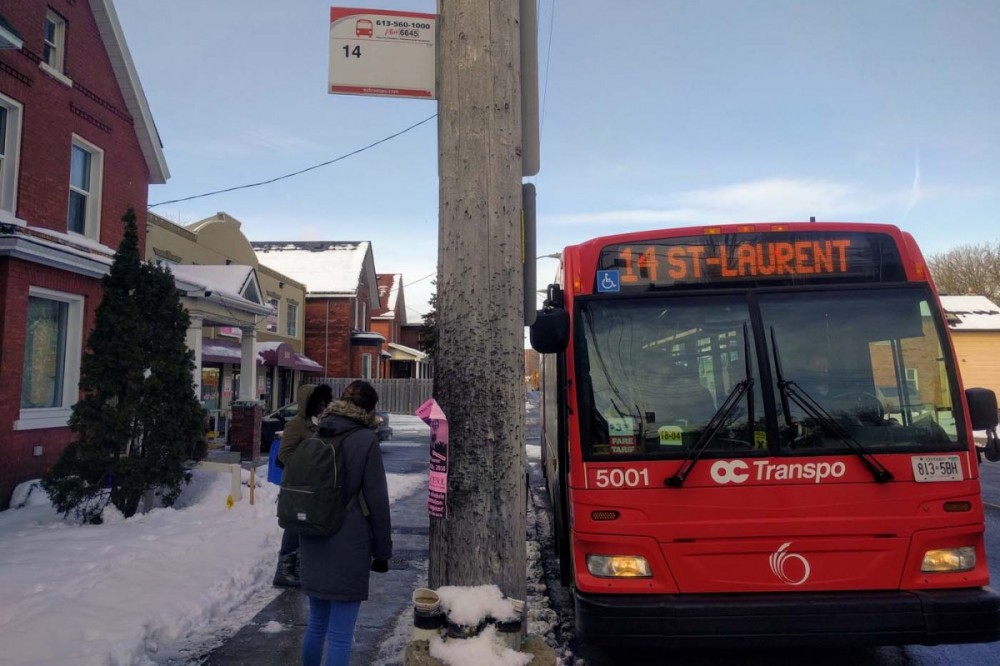 Since I moved to Ottawa in 2016 I've taken the bus only eight times, having quickly realized that no matter where I wanted to go in the city, walking would get me there almost as fast as the bus. Better yet, walking was free. I resolved to use the bus only in the worst of weather.
That resolution might change.

Solidarity Ottawa has launched a campaign to get Ottawa to join the more than 100 cities around the world that offer free public transit. The experience of those cities shows that eliminating fares drastically increases ridership, which leads to expanded service and improved quality of service. The jump in the number of riders also cuts down on one of the largest sources of greenhouse gases: cars.

Ottawa already has the highest transit fares in the country. A single, one-way bus trip costs $3.50 per cash fare. A monthly pass costs $116.50. (While there's now a low-income option, the price appears to be still too high as fewer than 25 per cent of those eligible have applied for it.)

Alex Cullen, past chair of the city council's municipal transit committee, says transit fares have increased by 21 per cent over the past six years — almost three times the rate of inflation. In that same six-year period, ridership has fallen from 103.5 million trips a year to 96.5 million. At the same time, Ottawa's population has risen by 60,000. Eliminating fares for buses would quickly reverse that trend, as it has in other cities.

To date, the largest municipality in the world to provide fare-free transit is Tallinn, the capital of Estonia. In a 2013 referendum, citizens voted to eliminate fares for all 416,000 residents of the city. Tracking that change, professors at Sweden's Royal Institute of Technology noted that since 2013, Tallinn's already high ridership has increased by 14 per cent, with a large boost in use by people living on low incomes, and with disabilities.

Amazingly, according to the Guardian article called The Tallinn experiment: what happens when a city makes public transport free? the program doesn't cost anything. Instead, it generates $20 million in profit a year, as it has attracted 30,000 new residents and their tax dollars. Other, smaller cities, especially in France, have also abolished transit fares.

Nils Fearnly reported in the International Journal of Transportation that, in each city, the jump in ridership ranged from eight per cent to 1,200 per cent, with high-density urban areas with previously expensive fares seeing the largest increase. In North America, where car culture is more dominant, the benefits are likely to be very great.

While no Canadian cities have eliminated fares altogether, many have made transit partially free. Calgary's Light Rail Train (LRT) system and Winnipeg's bus system are both always free for riders on downtown routes. Laval waives fares for seniors, and in Sherbooke, university students don't pay anything to ride. Here in Ottawa, seniors ride free on Wednesdays. In Montreal, one of the campaign promises of newly elected mayor Valérie Plante was to make transit free for children under 12.

Solidarity Ottawa, a local membership-based anti-capitalist organization, is calling on Ottawa to become the first Canadian city to offer free transit. They argue that free public transit is a necessary way to mitigate the worst effects of climate change.

After oil and gas, the transportation sector is the second largest source of Canada's greenhouse gas emissions, producing 23 per cent of all emissions. The 2016 census reported that only 12 per cent of Canadians use public transit as their main mode of transportation and almost 14 million people use their cars to get to and from work each day.

Many politicians and citizens balk at taking on big ideas like fare-free transit, and instead argue that it would be easier to just reduce the fares. However, reducing fares is unlikely to bring the same benefits as completely eliminating them. Authors of the Belgian study Free Public Transit: A Socio-Cognitive Analysis report that a reduced price in Flanders did not significantly increase ridership; it was only the "hook" of being able to try the service without charge that drew new passengers.

WHAT WOULD IT TAKE?

What would it take to make transit free for everyone year round? Fortunately, user fees account for only a portion of transit budgets. In Ottawa, $196 million of the transit authority's $520 million budget comes from passenger fares (the remainder comes from taxes and transfers). To put that in perspective, Ottawa's entire municipal budget is $3.42 billion for 2018. Still, eliminating $196 million in revenue would represent an almost six per cent increase in total city spending, a hard pill for politicians to swallow.

Inevitably, they'll ask how we expect to pay for it. There are many options: increase provincial or federal funding; close tax havens; restore corporate tax rates; or, my favourite: BC anti-poverty activist Jean Swanson's idea of installing a tax on mansion owners. (Swanson wanted the revenue to be used for housing for the poor.)

But we shouldn't get caught in the logic of austerity, which says that public services are justified only by their price tag. Parks (local parks), libraries and schools are free, and transit should be too. And by "free," I mean this: everyone benefits from it, so everyone should pay for it, through our taxes — like we do for health care.

Budgets are all about choices and it's our job, as progressives, to force politicians to make those hard choices — for the benefit of everyone.