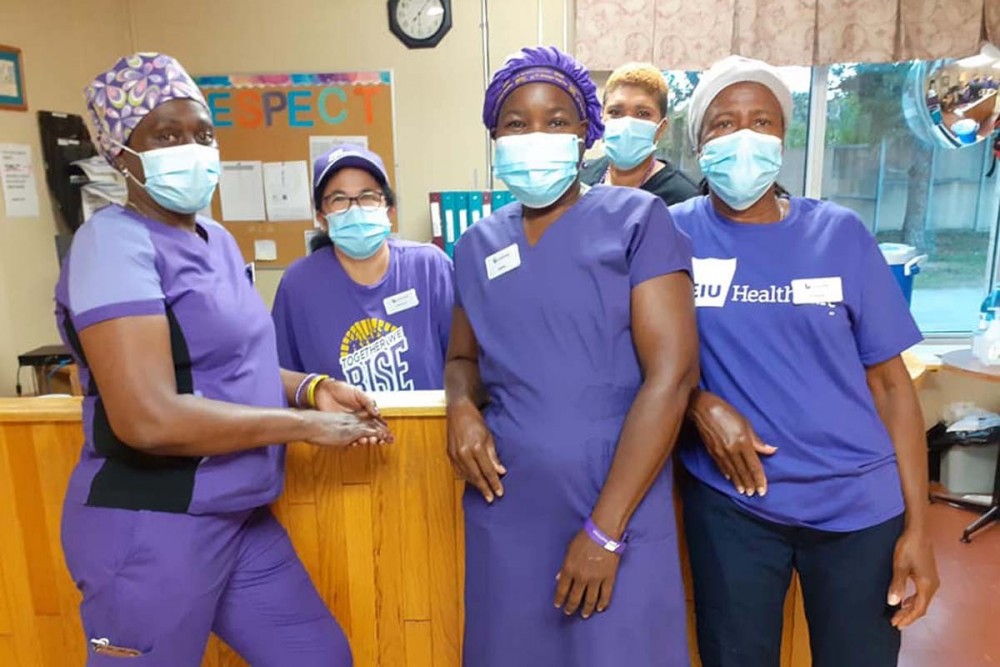 To address climate change, we need to create millions of good jobs. In addition to traditional “green” jobs like installing renewable energy, we need millions of new jobs that create little to no pollution while making our communities healthier. Yet those same jobs are often poorly paid and insecure.

We need to challenge the logic that devalues the work of caring for each other, work which is most often done by women and racialized people. We must ensure that care workers are well paid and unionized, with good benefits and vastly improved working conditions. That in itself is a climate solution.

COVID-19 has brought the horrors of Canada’s long-term care system into the national spotlight. What patients and advocates have long known is now plain for all to see: it’s a system built to provide the minimum amount of care possible, dependent upon low-wage workers and unpaid caregivers, in order to enrich private shareholders.

According to journalist Nora Loreto, 6,479, or 84 per cent, of the 7,703 Canadians who have died from COVID-19, at the time of writing this, have died in long-term care facilities. When Ontario Premier Doug Ford called in the military to help reduce the spread of the coronavirus in nursing homes, the details of their ensuing report were explosive: rotten food, cockroach infestations, seniors left soiled and crying for help for hours.

The Call to End Profiteering in Care

A number of organizations and unions, including the Canadian Union of Public Employees (CUPE), the National Union of Public and General Employees (NUPGE), the Canadian Labour Congress (CLC) and more, are rightly calling to bring long-term care into the public health system and thereby eliminate profit-making from caring for the elderly. Along with that, we also need to ensure that care workers are not simply called heroes but are actually treated as heroes.

While health care unions welcomed the military’s report, they stressed that they had been saying the same thing for years: their members working in long-term care are short-staffed, overburdened, and unable to provide sufficient care to residents.

One of the first emergency orders the Ontario Conservative government gave in response to the pandemic was to ban long-term care staff from working in more than one facility, in order to reduce infections. Of course, the move did nothing to address the low wages and precarious nature of the job that force individual staff members to work at multiple facilities.

In late April, more than a month later, Doug Ford announced a $4-an-hour wage increase of “pandemic pay” for LTC and frontline workers. It’s an improvement but LTC workers are still grossly underpaid. In Ontario (like other provinces), the average earnings for long-term care workers before the pandemic were just over $38,000 per year, well below the average provincial salary of $51,105. Care work is undervalued or, at times, not valued at all.

Another emergency order by Doug Ford was to reduce staffing requirements, allowing facilities to hire unskilled contractors or to even use volunteers instead of licensed and unionized staff.

Even before the pandemic, there were no minimum staffing requirements for long-term care. Personal Support Workers (also called Continuing Care Assistants) often found themselves each responsible for up to 30 residents; for nurses that ratio could be up to 130 residents. The conditions are gruelling and rife with the stress that comes from being unable to provide sufficient care to those who need it. COVID-19 worsened what was already a crisis.

Who Does the Work?

Our bare-bones long-term care system depends not just on the dedication of staff, but also on the unpaid labour of relatives and friends providing care (a vast savings to the health system). It is estimated that there are over eight million unpaid caregivers in Canada, most of whom are women. They are seldom compensated, but without their labour the system would collapse.

With an aging population, we know we desperately need more health care workers. Not only that, we need many more teachers, cleaners, child care workers, domestic caregivers, and social workers. These professions provide innumerable benefits. Really, they do the work that makes our communities rich, and are already low-carbon.

Now that mainstream politicians and organizations are finally talking about making fundamental changes to long-term care, we must force them to fundamentally revalue the work of caring for the sick and elderly. It is among the most important jobs in our society and should be treated as such. Not only do LTC workers provide a valuable service for all, their work is exactly the type of employment we need to invest in as a cornerstone of a Green New Deal.