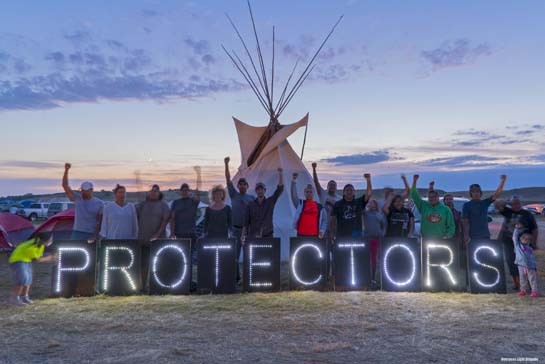 South of the border, a struggle against a pipeline and for the self-determination of a people has been capturing international attention. The Standing Rock Sioux constructed a camp and thousands of allies joined them to protect the sacred land — and waters — threatened by the Dakota Access Pipeline.

At the beginning of December 2016, the U.S. Army Corps of Engineers refused to grant an easement for the pipeline to cross under the Missouri River. The fight, which began in 2014, is far from over, but denial of the permit was celebrated as a major victory for Indigenous peoples in their ongoing struggle for autonomy.

At home, there are dozens of similar struggles playing out in regions across the country. One question lies at the heart of each of them: what is the relationship between Indigenous people and the Canadian government?

In early 2015, Canada's Truth and Reconciliation Commission (TRC) released its final report. The report summarized six years' worth of work understanding and documenting the impact of Canada's residential school system, which tried to forcibly assimilate more than 150,000 First Nations, Métis and Inuit children.

A product of meetings held in over 300 communities, 6,570 personal testimonials and millions of documents, it is the largest ever investigation into Indigenous-settler relations in Canada. The findings led the commission to conclude that Canada had committed cultural genocide against Indigenous peoples.

The TRC report ends on a hopeful note, with a tentative path towards reconciliation between Aboriginal and non-Aboriginal peoples. One of the essential principles of reconciliation, the TRC writes, is the social and legal recognition that "First Nations, Inuit, and Métis peoples, as the original peoples of this country and as self-determining peoples, have Treaty, constitutional, and human rights that must be recognized and respected."

Canada has begun to acknowledge its history of brutal colonization, but has been slow to recognize the legal rights of self-determination. Nowhere is that more apparent than in Nova Scotia.

About 70 kilometres from Halifax, outside the town of Stewiacke, the Sipekne'katik First Nation and allies are fighting both an energy corporation and the provincial government to protect the Shubenacadie River.

In late 2014, the Alton Gas company began hollowing out numerous nearby salt caverns for natural gas storage. The company plans to divert part of the river into the caverns in order to drain millions of litres of extracted salt into a pond. The resulting brine will then be diluted before being discharged back into the river.

In order to reduce the long-term impacts on the ecosystem, the company proposes to discharge the brine only when the local fish and larvae are at their most abundant. Alton Gas claims that by diluting the brine so its salinity levels are similar to those of the river, and by discharging that brine only in the "high-season," the project will carry with it few to no adverse effects.

To date, however, the research that backs up those claims is incredibly limited: it examines the project's impacts on only a couple of species of fish, during only one or two seasons, and never at Alton Gas' proposed salinity levels. Not to mention, all of the research has been funded by the company.

Local residents and First Nations have joined forces to fight the project. In January 2016, the Sipekne'katik Band filed a legal appeal against the Department of Energy's approval of the project due to a lack of consultation with the band. The government has fought the claim, and the case is ongoing before the Supreme Court of Nova Scotia.

When Department of Justice lawyer Alex Cameron presented the government's case last November, he argued that the Sipekne'katik Band were a "conquered people" who had surrendered their sovereignty to the British. As such, Aboriginal rights treaties did not apply and there was no duty to consult.

After public backlash, Premier Stephen McNeil apologized and removed Cameron from the case. However, at the time of writing, Cameron's legal briefing remains part of the government's defence. The province still maintains its case, and refuses to let the Sipekne'katik hold a referendum on the project.

Prime Minster Justin Trudeau promised a new relationship of collaboration with Indigenous peoples. Shortly after winning a majority, his government overturned Canada's near decade-long objector status and signed on to the United Nations Declaration on the Rights of Indigenous Peoples (UNDRIP). The Declaration, while not legally binding, commits signatories to upholding the rights of Indigenous peoples to "language, identity, culture and traditions, health and education" and, crucially, to "free, prior and informed consent to resource extraction." 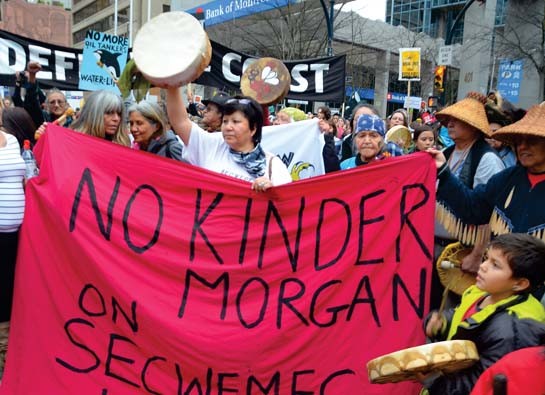 More than 5,000 people took to the streets of downtown Vancouver on November 19, 2016 to voice their opposition to the KM pipeline expansion plan. PHOTOGRAPH: MURRAY BUSH/ FLUX PHOTO

Adding Canada's name to the declaration was meant to signal a new era of Indigenous-settler relations based on equal partnership. However, the federal government refused to include that last stipulation — that Indigenous people must have fully informed decision-making power over the resource policies that affect them.

The government is worried that the clause would give First Nations and Inuit people the ability to veto massive resource extraction projects on their territories. Indeed, what sovereign nation would agree to projects like the Energy East and Kinder Morgan pipelines that threaten their very land and water, while providing no real economic benefit to their people?

Canada and Canadians have made strides in acknowledging the centuries of genocide and oppression of Indigenous peoples. But unless governments begin to treat them as legally and socially autonomous nations, reconciliation will remain a pipe dream, and a crude one at that.