We Need Action, Not Words 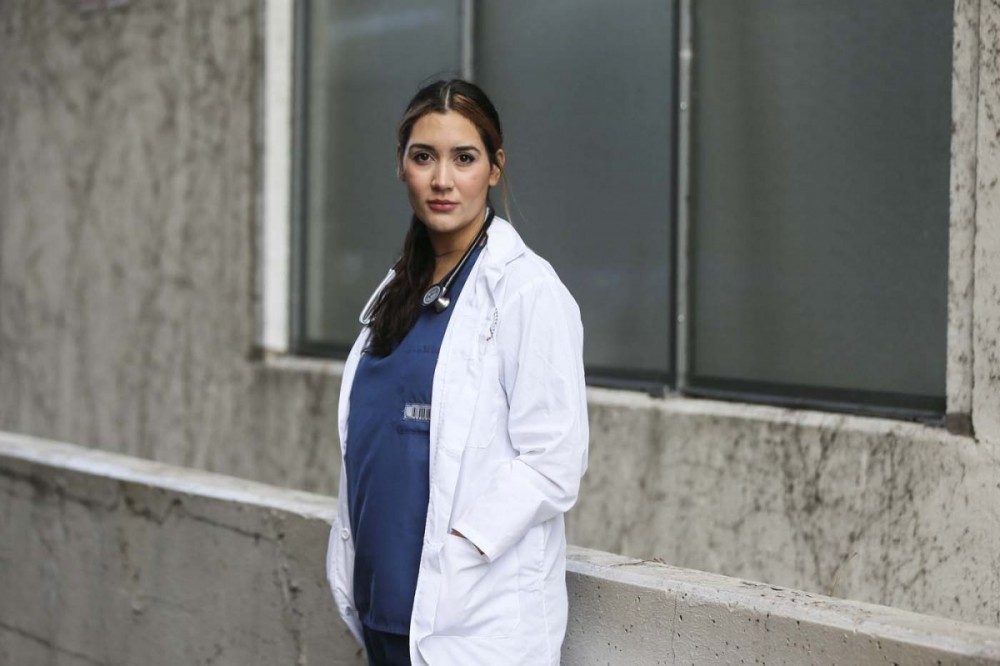 Personal protective equipment is a huge issue, “and decent wages for all workers, not only those in the health sectors,” says Carolina Jimenez, a registered nurse. PHOTOGRAPH: ANDREW FRANCIS WALLACE/TORONTO STAR

The paradox is everywhere: politicians, celebrities, and the general public praise essential workers for keeping society functioning during the COVID-19 pandemic, even as basic health and safety concerns remain unaddressed for this broadly defined category of workers. Ensuring that frontline staff have adequate PPE (personal protective equipment) is only part of the equation.

On May 7, Prime Minister Justin Trudeau announced $3-billion in federal wage subsidies for essential workers who risked contracting the novel coronavirus on the job. The funding, to be added to another $1-billion from the provinces and territories, was to be disbursed according to how each province/territory saw fit. In his televised daily public address, Trudeau acknowledged what many Canadians have known, and lived, all along: “I think one of the things that we're seeing through this pandemic is that there are people who are tremendously economically vulnerable, and vulnerable in other ways in our society, who are extremely important to the functioning of our society.”

On April 16, an online media conference by the Decent Work and Health Network saw these often-marginalized workers express what it’s like to be “essential” during a pandemic. Febe Jimenez was one of six speakers at “Frontline workers speak out: Tragedies at long-term care homes expose the working conditions that put workers, patients, and public at risk.” She is a personal support worker (PSW) at a retirement home in Hamilton, Ontario.

Jimenez said the facility where she works is “independent living with a little bit of assistance” for the seniors who live there. The amount of work that she and her co-workers do has not changed because of COVID-19 precautions, she noted, but the nature of the job has changed:

“Evening shift right now, our routine is pretty different, just because of everything going on with COVID. We no longer deliver [meal] trays to everyone. We only do isolation rooms, for people who are quarantined. We don’t do any of the housekeeping stuff anymore, because a lot of the [on-site] cafes and everything is closed there, because of social distancing. Most of our shift is taking temperatures; we do them twice a day and we do all the rooms. Our place is pretty big. More than a hundred rooms, and we take temperatures every day. Pick up garbage from the isolation rooms. We still do daily stuff like room checks, medication reminders, but mostly we deal with the quarantine rooms.”

Jimenez tells Our Times that her workplace had not experienced an outbreak of the coronavirus, although residents were fearful. “Our place is actually not doing bad right now. Our part-time people are doing full-time work at our place; they’re not travelling back and forth, and they’re getting full-time hours at our place, so we have extra help.

“They’re not travelling to their other nursing home jobs, they’re just staying at our place, doing full-time hours, and they’ve even put in extra COVID shifts, so we have an extra PSW on evenings and an extra PSW on days, and sometimes an extra nurse.”

Allowing part-time care workers to be based at a single facility through the pandemic is consistent with preventing the spread of the dangerously infectious illness. When someone must travel from one poorly remunerated job to another, just to make ends meet, the virus finds an ideal vector for transmission: a worker who cannot afford to take time off, even if they are feeling unwell.

Jimenez explains that a provincial wage supplement was added for Ontario workers in her sector: “Basically anyone who is working in a nursing or retirement home or hospital just got a $4 increase.” Yet for people with little job security, serving a population vulnerable to infectious illnesses, the enhanced wages matter less than what they still lack — paid sick days.

“Everyone I talk to, from co-workers to workers in other places, that’s the number one thing they want now,” adds the 27-year-old PSW, “because you’re going to quarantine at some point, or the home is going to get sick, or you are going to show up at work with just a cough but not be allowed to enter the building.”

With no income if they become too ill to work, staff at care facilities face an impossible situation. Jimenez says that workers are expected to stay home and self-quarantine, but at personal cost. “Whenever I’m sick for a day or two, it’s unpaid,” she explains. “I can take vacation days. At my place, it’s paid vacation. I’m lucky — I’m younger and haven’t been off [work] on an injury, or a bad sickness or something for weeks. I’ve only had two or three days off sick throughout the year, but they’re unpaid.”

She recognizes that fears are heightened among her co-workers with dependents at home: “I would say most of the girls there are older. They’ve been there since the building opened, so for 15 years, and they have two or three kids at least.”

Jimenez is a shop steward in her union, LiUNA Local 3000. She says she’s heard double the usual number of members’ concerns lately, ranging from “What happens when this [state of emergency] gets lifted?” to “When the Dollar Store had a wage increase and we didn’t, when will we have a wage increase?”

Health-related fears are front and centre: “They want to know what happens when they need to take a job to have full-time hours, and what’s going to happen if the [care] home gets infected and [they] go home and [they] live with Grandma and Grandpa and the kids. . . . When is the income going to come?” The “income” in question is the Canadian Emergency Response Benefit (CERB), a federal income program introduced April 6 for people suddenly unemployed due to COVID-19.

Fanfare about the heroism of frontline healthcare staff has become popular fare on social media and television. Jimenez wonders if the focus on her sector will remain, after the flattening of the curve. “I think the problem was that there wasn’t as much attention on us before,” she says. “Now there’s so much attention, but that attention is temporary, like they only realized that now [that] we’re in outbreak.”

True appreciation would be better reflected by adequate staff-to-client ratios, paid sick days, and good wages. “When we were asking people why they were being interviewed [for jobs] but they weren’t coming back,” explains the shop steward, “it was just that the starting wage, they thought it was too low.”

Carolina Jimenez (no relation) was also part of the “Frontline workers speak out” panel. “I’m a registered nurse and a public health professional, and I also coordinate the Decent Work and Health Network, which is a coalition of community members and health providers who know that bad jobs lead to bad health,” she tells Our Times.

“For several months we’ve been calling for at least seven paid sick days for all workers, as well as an additional 14 paid emergency leave days for health crises like the one we’re in right now, as well as basic health and safety and a decent wage. Personal protective equipment is a huge issue, as we’ve seen, and decent wages for all workers, not only those in the health sectors.”

The coronavirus outbreak has redefined who is considered an essential worker, but not everyone performing essential roles is eligible for supports like Ontario’s “pandemic premium” $4-per-hour addition to pay or the federal CERB. “For example, if you think about couriers, people delivering food or delivering alcohol now, grocery store workers: those folks are not eligible for this premium pay,” notes Jimenez. (The rules around eligibility for pandemic premium pay have been changing rapidly and vary among provinces; some formerly ineligible workers may find their occupations recently added to the list of essential services for which there is a pay increase.)

Precarious Work is a Health Hazard

Some workers mix and match various jobs for a patchwork, survival-level income, which the registered nurse says is inherently dangerous: “We know that precarious work is a health hazard, always, not just during a pandemic. If we would’ve had paid sick days protections, decent wages, full-time hours, we would not be in this situation that we’re in right now. We’re talking about lives that could have been saved.

“What we’re seeing in the long-term care homes is that these workers who are in precarious situations have to work multiple jobs to cobble enough money to get by. But if they had the better wages and were able to stay home if they were feeling unwell, without that overwhelming financial pressure and the burden to take an unpaid day, we absolutely would have seen a difference. We hear this from our patients and our workers.”

Jimenez calls out the Doug Ford Conservative government for dismantling protections like mandatory paid sick days, which the Kathleen Wynne-led Liberals had brought in before the last provincial election. “They also made changes to the personal emergency leave part of the Employment Standards Act. They made it more difficult to access, and so what they did during the COVID-19 crisis is that they expanded the unpaid leave, but that’s simply not going to cut it. It’s simply not enough, and that’s why we need these measures back, and more, and permanently.

“It’s very frustrating on a personal level, but on a medical level, it’s negligent that these workers do not have a minimum standard for people to keep themselves safe. […] We had an open letter that was signed by 300 health providers from across the province who were, at that time, calling for the paid sick days, no sick notes, and increased access to income support. We have won some of those demands, but it does not really go far enough to protect those most at the margins of our society, who have been facing the brunt of COVID’s effects since the very beginning.”

Jimenez says essential workers are endangered when big business is prioritized over basic rights to workplace health and safety. Even her own profession is affected: “What we have seen is that over the past several years, there’s been a shift from more stable forms of nursing into more precarious forms of nursing. There’s a shift into casual, part-time, and temporary forms of employment for nurses, meaning that often they will not be with a union and they will not have access to paid sick days as a result.”

The Decent Work and Health Network is hosting organizing meetings via Zoom. New participants are welcome to join the webinar and sign up for newsletters.