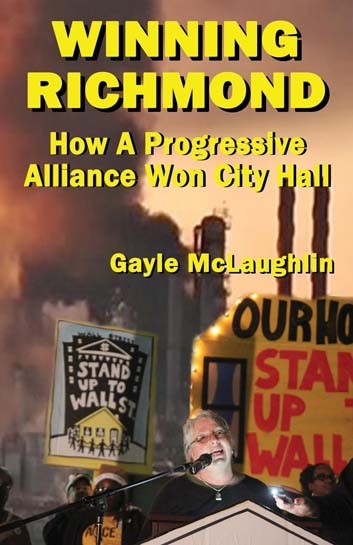 We rarely see an inspiring book from the U.S. these days about political organizing. So much "progressive" writing in the Trump era is depressing. People delve into detail about the growing inequality, the swelling power of the oligarchy and the multiple ways that popular consent to oppression is engineered.

This book stands out as an account of a decade of efforts to turn the tide. It's encouraging but not naive. It's the tale of Richmond, a working-class city of 110,000 people in the San Francisco Bay Area of Northern California.

Gayle McLaughlin helped build the Richmond Progressive Alliance, a broad-based coalition that "created the capacity to take on big oil, big banks, big soda, big charters (schools) and big landlords." The story of that building process is detailed, with setbacks noted and credit shared, with hard work rewarded and hypocrisy exposed. She became mayor for eight years in the shadow of a giant century-old Chevron refinery, one she constantly did battle with.

At one level, the story seems simple. A few decent people come together, begin outreach to people unlike themselves, listen to suggestions from experts and from marginalized people, and stay flexible and optimistic as campaigns fail and they harvest the lessons. They have a few basic principles, most importantly that they accept no donations from corporations. Gradually they start winning, show courage in a culture of fear and passivity, achieve successes in a culture of defeat, and occasionally get lucky. It's a bumpy road, but the direction is clear and the progress measurable.

The story begins with addressing crime in the streets, not by increasing police budgets but by shifting to a community-policing model, one which culminates in a widely publicized photo of the police chief, holding a sign that says "Black Lives Matter." The story moves on through environmental issues, the struggle to stop a casino development that would destroy parkland and so on.

THE ARTS AND IMMIGRANTS' RIGHTS

The Richmond Progressive Alliance, McLaughlin's political anchor, worked in "areas as disparate as supporting and spreading the arts throughout our city, promoting community empowerment, immigrant rights, health and wellness, education and addressing crime — all with dwindling resources."

Near the end, she draws lessons from her experience: "There are no short cuts. We need to build grassroots change from the bottom up, resolving conflicts as we go, respecting different approaches and not getting caught up in theoretical arguments on how to make progressive change. We need action, and those actions need to come about in concert with people and groups who will do the work."

This is the statement of a radical, not a sectarian. She recounts, in battle after battle the temptation to split with people whose views differ from her own, but comes down with a pragmatic focus on the oppressors, most notably the Chevron Corporation and its political representatives.

She holds steady with a working-class perspective, but recognizes the value of collaboration with professionals, engineers, economists, researchers and others who are willing to contribute to a common enterprise. Her refusal of dogmatism, heavily criticized at the time, is convincingly presented as a great strength.

McLaughlin's book came out as she undertook a campaign for lieutenant governor of California, moving from her solid base in a small city to tackle a bigger scale of change. Immediately, many progressives began talking about her "splitting the progressive vote" and possibly undermining more "moderate" (read corporate) Democratic candidates in a time of Republican resurgence. The argument made by those progressives resonates with those in Canada who swing away from the New Democratic Party towards the Liberals whenever the Conservatives are showing signs of strength.

Sadly, McLaughlin was not one of the two candidates who garnered the most votes in the California primary ballot, held in June. Under California's "top-two primary" rules, only those two contenders will move on to the November election for lieutenant governor. But she has imparted valuable lessons with her writing.

I enjoyed this book. Optimistic but clear-eyed, it reminds us of the basics for building a grassroots movement for progressive change. Living in Ontario, where the NDP may have made some gains but all of us face Doug Ford as premier, stories of clear-eyed and patient political organizing have never been more relevant.

D'Arcy Martin is a veteran union educator. In May 2018 he received the Toronto Mayworks' Min Sook Lee Award for Outstanding Contribution to Labour Arts.