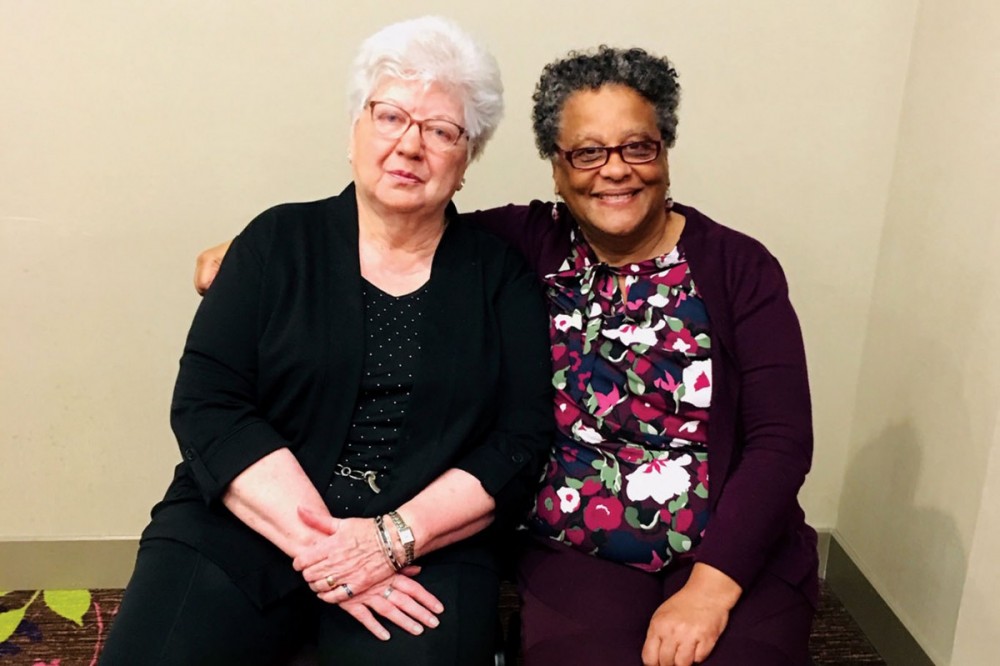 “I hear people say, ‘I hope I die before my pension runs out,’” Suzanne Clancy declares. “It shouldn’t be that resources only last so many years. I’ve been retired since 2006. Not once has my pension been adjusted with the rate of inflation. It puts retirees on the fringe and it can be devastating.”

Clancy, president of the Ontario Federation of Union Retirees (OFUR), is 77 years old with a lifetime of union activism behind her. She is wise, experienced — and generous with her knowledge.

“OFUR has amazing women,” says Janice Gairey, praising Clancy for her leadership and commitment. “They get it, and the organization has been transformed into a collective.” Gairey is on the telephone from California, where she is visiting family. She notes that “OFUR had a white, male leadership and needed to have outreach to reflect all our members.”

A labour activist and union organizer for over four decades as well as a mother of six and grandmother of 18, Gairey is an amazing woman herself. After retiring as human rights director of the Ontario Federation of Labour (OFL) in 2015, she joined the council of OFUR and is also secretary of the Congress of Union Retirees of Canada (CURC).

Gairey speaks of five equity groups — women, Indigenous women, women of colour, the LGBTQ2SIA+ community and people with disabilities. She champions their inclusion and promotes the idea of intersectionality when dealing with seniors’ issues — and all other social concerns.

Gairey started her work life as an education assistant in a Toronto school in 1987 and got involved in Canadian Union of Public Employees (CUPE) Local 1874, eventually becoming acting president. From there she moved on to work as a project coordinator for the Toronto & York Region Labour Council before settling into her first position with the OFL, as a regional coordinator of the Basic Education for Skills Training (BEST) Program. When the government cut the workplace literacy program, Gairey took on several positions in various unions before returning to the OFL in 2003 as the education director.

Always a strong supporter of mentoring, or “femtoring,” as it’s called when women help women, Gairey considers June Veecock, whom she succeeded as OFL human rights director, an important femtor of hers.

A past president of the Coalition of Black Trade Unionists Ontario Chapter (CBTU), Gairey, during her time leading the organization, created a formal alliance between CBTU, the Latin American Trade Unionists Coalition (LATUC) and the Asian Canadian Labour Alliance (ACLA). She also foregrounded Indigenous issues and worked closely with First Nations, Inuit and Métis communities.

A Family History of Activism

Gairey’s civil rights activism can be traced back to her great grandfather, Thomas John Holland, who escaped slavery on a plantation in the United States, swimming across the Niagara River to freedom in 1852. He was joined by his older brother, William Henson Holland, in 1860. Their family roots in the United States reach back to at least the late 1700s. A document shows Polly, born in 1797, was sold, under her first name only, at a slave auction at age 16. Polly married Jack Howard and they had eight children, among them Leatha. It was the sons of Leatha and her husband, Augusta Holland, who escaped a life of slavery on a Maryland plantation, making the dangerous journey north on the “underground railway” to Canada West (now Ontario). William settled near Windsor and Thomas in Hamilton. Gairey attends Howard-Holland reunions of up to 500 family members, held in locations on both sides of the border every two years. Gairey’s father, the late Desmond Davis, was a pivotal member of the Brotherhood of Sleeping Car Porters.

Gairey names a number of campaigns she stands behind, from raising the minimum wage to fighting for fair tuition fees. “We need to have more conversations with younger women — we need to work together as a collective,” she says. “They support us and we support them. These issues affect all of us.”

Gairey and Clancy want to close the generation gap by working together with younger Canadians. “One of my big concerns is trying to emphasize the need for serious retirement planning early on, especially for women,” Clancy says over the telephone from her home in Hamilton. “Young women must realize the white knight has died and fallen off his horse.”

Clancy was employed as a sessional instructor and then a professor at Mohawk College for 30 years, working with unemployed and laid-off workers. A major focus of her work was supporting people with intellectual disabilities and other significant learning challenges, through an Adults in Transition program. A leader in her field, she was involved in advocating, counselling, upgrading and retraining, job placement and the recruitment of local employers. She was also co-editor of the Faculty newsletter, The Examiner. Clancy also participated in her union as a steward, treasurer and vice-president of Ontario Public Service Employees Union (OPSEU) Local 240. She was on the union’s grievance committee and walked the picket line during three college strikes.

Retired in 2007, Clancy’s belief in feminism, collective action and inclusivity continue to be part of her activism as she enters her third term leading OFUR. She also brings a national perspective to her advocacy for Ontario seniors, as a member-at-large on the executive of the Congress of Union Retirees (CURC), an affiliate of the Canadian Labour Congress (CLC) with more than half a million retired members.

“Canadians are living longer,” Clancy says, “and the cost of long-term care and retirement homes are an issue.” She quotes the rent for a studio in a retirement home in Hamilton at $3,495 a month, not including other living expenses, well above the average market rate.

Long-term care facilities are also expensive and only partially subsidized by the government. Private insurance policies related to long-term care stays are complex, spotty in their coverage and out of reach for too many people.

“This issue isn’t talked about,” Clancy observes. “What happens to people who can’t afford long-term care?”

Clancy shares her own story. When her husband reacted to medicine and went to the hospital for what should have been a couple of days, he never came home. Diagnosed with dementia, he was placed in a long-term care facility where he continues to live.

“The staff at my husband’s place is hard-working and competent,” Clancy says. “They are in a union. It is not an easy group of older people to work with — people with dementia and Alzheimer’s. There are 10 people in my husband’s unit. The employers don’t value these workers the way they should be valued.”

Gairey agrees that seniors’ precarious living conditions are not being adequately addressed. “Social housing, co-operative housing and senior housing are at a standstill,” Gairey says. “Rents are not affordable. The risk of homelessness is greater for women, too. The waiting lists for senior housing can be up to 15 years.”

She believes a good place to start would be to make changes to the federal census: more detailed information about seniors needs to be collected to give an accurate picture of the kind of precarity women are experiencing in their later years.

According to the CLC website, more than 3.5 million Canadians can’t afford the medicine they need. Thanks to lobbying efforts, in 2018 the federal government set up an advisory committee to study the implementation of universal pharmacare.

Universal pharmacare is an equity issue, too, Gairey says. “How it is arranged and developed has to consider that one pocket does not fit all people.” She points to Indigenous women in isolated communities requiring assistance to access health care provisions, as one example.

“A national pharmacare plan is our number one issue,” Clancy says of CURC. “Canada is the only country with medicare, but not pharmacare.”

Precarity Then and Now

Clancy is looking beyond her own generation’s experience with precarity: “I think about what’s going on with young people now. Someone will have to support them if they don’t have a pension or adequate savings.” She believes the best solution is secure pensions for all. “Yet companies are doing away with pensions,” she points out, “leaving individuals to manage.”

Again women are usually hit harder, since they still earn less than men on average and accumulate less time in the workforce. “All this means more women retire with smaller pensions,” she says. “Women have many other duties as caregivers,” Gairey notes. Echoing Clancy, she says “We have a bigger plate and fewer years of (paid work) service.” A marriage or partnership is no guarantee of life-long security either. When one partner dies, the survivor receives a reduced portion of the deceased’s pension.

“More women are going back to work when their husband or partner is laid off or needs care for health reasons,” Clancy continues. “Lots of people are keeping their spouse or parent at home. They are giving care — but also scrambling for help. You hear about seniors wandering and missing.”

Resources could become even more scarce if provincial governments continue their attacks on the public sector. “Premier Doug Ford’s proposed $6 billion in spending cuts will lead to fewer public services,” Clancy warns of the Ontario government’s policies, “which means health care needs will be downloaded on to individuals and families.”

“Right now they are hitting us left and right,” Gairey says. “When we have these rallies against cuts to education and health, seniors are there. We are supportive.” She makes the point that all of these issues are interconnected. “We have to care about everything in Canada. We can’t only address seniors. I know young people don’t want to hear it,” Gairey says, “but they have to acknowledge the history of people in all walks of life. It takes time. We need to have ears that listen and voices that keep quiet.”

Clancy asks people to be aware about seniors in their midst. “Look out for neighbours,” she advises. “If things don’t seem right, check it out.” Of her own experience, she says, “I have lived on the same street for 30 years and I have good neighbours. Young people shovel my driveway and my neighbours check on me.

“Creative solutions are needed because people are living longer,” Clancy believes. “These issues are not going away.”

To support seniors, CURC offers pre-retirement courses on finances, housing, health, changing relationships and many other topics. For more information about seniors' issues, see as well, the Older Womens' Network on Facebook. And don't forget to sign the CLC's petition on universal pharmacare.

1. Put credit in your own name and maintain good credit. Remember — “the white knight died and fell off his horse."

2. Learn something new every year and keep your skills up.

4. Live one level below your means. Just because the bank says you qualify, doesn’t mean you should listen.

5. As the workforce becomes more precarious, keep a record of employment, skills and accomplishments. “If you lose your job, you can demonstrate what you’ve accomplished. Keep everything,” Suzanne Clancy advises.

1. Learn the history of your union and what it is about.

2. Support your union and attend meetings.

3. Run for office or volunteer for committees.

5. The wages and conditions enjoyed by union members “don’t happen by magic. It takes hard work and keeping informed.”