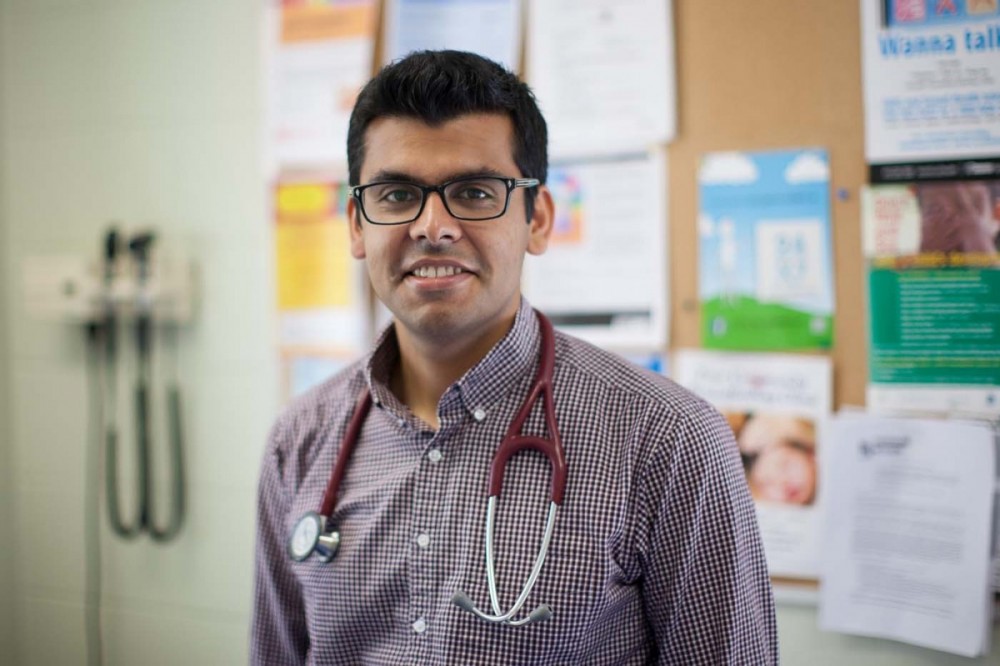 "We believe that everyone in Canada should have access to high quality health care," says Dr. Danyaal Raza, chair of Canadian Doctors for Medicare and a family physician at St. Michael's Hospital, in Toronto. "And that to me — it's strange to say it — but it's this piece of public policy that's an embodiment of a lot of the values that I hold personally."

On June 17 this year Ontario doctors voted in favour of a tentative agreement with the Ontario Ministry of Health that would send contract disputes to binding arbitration. In advance of the vote, Dr. Mark D'Souza, chair of the Ontario Medical Association (OMA) districts that cover Toronto, sent out a survey to members.

It included questions about a model of private health care in Canada that Raza calls problematic: "Namely the levying of user fees for services that are already paid for by medicare," he explains, "which is a contravention of the Canada Health Act. It also poses a significant barrier to care, especially for folks who are low income."

A week earlier, on June 10, the Globe and Mail's Kathy Tomlinson reported on how some doctors are double-dipping, charging both government, as well as patients privately.

Beyond the OMA survey itself, which Raza calls poor (notably, D'Souza has since resigned), the very mention of user fees is a red flag for most Canadians, who care deeply about their hard-won public health care system.

"We're seeing a trend towards these small violations of the principles of our health care system, but also some of the legislative basis of it," says Raza. "I think a lot of people read that pretty remarkable Globe and Mail investigation that looked at how some of the practices — the practice that this OMA survey was soliciting people's opinions on — is actually happening right now in many clinics across the country, where patients are being asked to pay for services that are already publicly insured and paid for by medicare and the provincial insurance plan."

One example is the ongoing BC Supreme Court case involving Dr. Brian Day, owner of Cambie Surgical Centre in Vancouver. Day wants the freedom to charge user fees on the basis that not allowing his clinic to do so would prevent patients from seeking the best possible care for themselves, which would be a violation of their rights according to the Canadian Charter of Rights and Freedoms. However, as Raza explains, this is not a case of redefining health care rights for the better — at least, not for the better for everyone.

"Basically what they're seeking to do is legalize the practice of double billing, to allow the levying of fees directly to patients for services that are already publicly insured, which is highly problematic. And also to allow for a system of dual practice, where a doctor can both practise in a public and in a private system, which actually generates a lot of the same problems as when you start to levy user fees."

According to Raza, this constitutional challenge came as a response to both the Cambie Surgical Centre and the Specialist Referral Clinic being audited on suspicion of billing patients as well as the provincial insurance plan for the costs of their care.

"They were asked to stop and rather than stopping, they responded by launching this constitutional challenge that is now before the BC Supreme Court," explains Raza. And these examples are not isolated incidents.

"So this is a problematic trend. We're seeing this happen also through these 'concierge medicine clinics' that are popping up, that are charging thousands of dollars in annual membership fees for folks to access basic primary-care services. It is worrisome that we're seeing these things happening."

So what would be the downside to allowing those who choose (and can afford) to pay for care that is publicly funded? Raza explains that such a system would benefit only the minority of people who could afford it, and it would make care less accessible for those who couldn't. In sum, it would benefit few at the expense of many.

"If you look at the experience of other jurisdictions where you have this dual practice — where you have a parallel public and private system — the wait lists get better only for those who can afford to pay. For those who rely on the public system, they actually end up waiting longer.

"Conceptually, it makes a lot of sense when you think about the limited supply that we have of doctors, nurses and other health care providers. If you have a fixed pool of people who provide services based on need and not on ability to pay, then everybody has an opportunity to access a doctor, nurse or hospital based on that principle. But if suddenly you reduce the pool of doctors and nurses that are available by reserving some of them for people who can pay to skip the line and get to the front, then of course the queues and the wait times are going to get longer for everybody else who can't afford to pay out of pocket."

According to Raza, Canada's universal health care system is in trouble not just because of those few doctors and clinics that are taking advantage of patients' willingness to pay for better care, but also because of our dated system.

"One of the things that believers in medicare have to do better is, we cannot just defend the status quo. It is absolutely true that single-payer (universal) health care is the most efficient and equitable way to pay for health care services. At the same time, that is not a reason to accept the status quo. So, while we defend the fundamentals of medicare, we can't sit on our heels. We also have to actively push for reforms to make health care even better."

Paying for faster access may seem appealing to people used to hours-long wait times and care that feels frustratingly slow. "As believers in publicly funded health care," says Raza, "we have to take the responsibility of offering a path to reform very seriously. In the absence of that, then people will find the false appeal of private financing and for-profit health care delivery tempting."

While Raza became chair of Canadian Doctors for Medicare just this past spring, he has been a part of the organization for years. Throughout his career, he has been committed to advocacy in medicine as well as the notion of accessible health care.

"As a medical student and then as a trainee and as an early career physician, I was seeing all of these ways that, at times, our public health care values were under attack. But I also saw ways in which our health care system could be improved.

"That's really what spurred me to get involved with an organization like Canadian Doctors for Medicare. It has a reputation for doing work that doesn't just protect and defend the fundamental values and principles of our health care system, but also finds ways to make medicare better."

BELIEVING IN THE VALUES OF SOCIAL JUSTICE

"I think it's something that I felt pretty early on," he tells Our Times. "As a physician you occupy this incredible place of social privilege. You know, you graduate with an 'MD' after your name and for the rest of your life people address you as 'Doctor,' not just in your professional life but in your personal life, too.

"You can take that privilege seriously and take it with the responsibility that it deserves and really use it to push for positive social change. I think that's something that I felt right from the get-go when I was a trainee and I was looking at role models who were doing this in their own careers and it's something that I wanted to make sure that I took seriously in my own."

While organizations like Canadian Doctors for Medicare and Doctors for Responsible Healthcare are committed to public health care and health care reform, there are those in medicine who do not hold the same view and, as Raza explains, are already running clinics with for-profit structures.

"Physicians are a heterogeneous bunch. You have folks like my colleagues in Doctors for Medicare who believe in evidence-based health care reform that prioritizes universal access and equitable access. And then you also have folks like Brian Day who have a very different idea of what the health care system should look like and what some of the fundamentals that underpin it should be. There's definitely a big range of views, not just in Ontario but across the country."

Raza, however, is unwavering in his belief in universal health care. "I view my role as a doctor, my career in medicine, as an expression of my belief in social justice," he says. "It's social justice values that inform the health care, and social determinants of health issues, that I teach about and advocate for and, of course, the way I shape my clinical practice as a family doctor."

This article originally appeared in Fall 2017 of Our Times Magazine. Support our work by subscribing today!