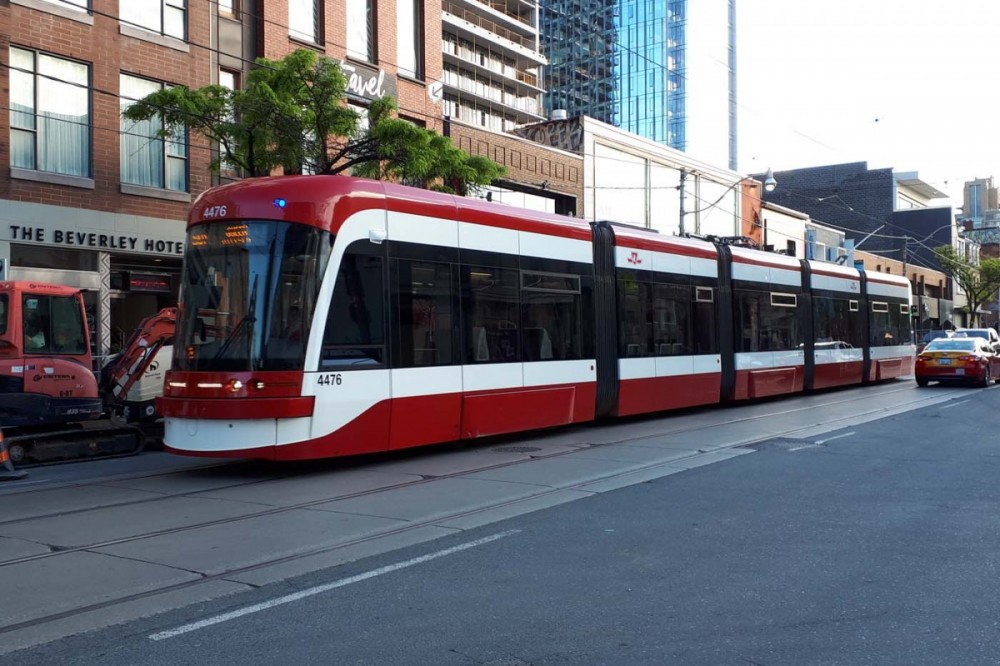 When I made the case last year for fare-free public transit in Ottawa, it seemed like a longshot. What a difference a year can make. Since then, we’ve seen mass-organized fare evasions, fare-free campaigns launched in major cities, and, last April, Victoria’s city council even passed a motion to make municipal transit free (although the BC NDP rejected the idea and spending the funds it would require).

Fare-free transit is an essential part of the solution to the combined crises of climate change and inequality. But, we can and should dream much bigger. A Green New Deal could provide the framework within which to demand the transit system we deserve: everything from nationalized electric bus companies, to the return of inter-city transit, to high-speed rail and, of course, free transit.

Fare-free transit in every city should be a cornerstone of a Green New Deal. We could point to how every dollar invested in transit returns three dollars in economic growth. But, frankly, mobility should simply be a right. Fare-free transit would fundamentally transform our cities and the lives of the working class. When everyone has the ability to move throughout their city, to get to and from work, to visit family and friends, to go to classes or appointments, to get groceries, or to get to nearby parks — then we create a city where everyone has the chance to thrive (and organize!). 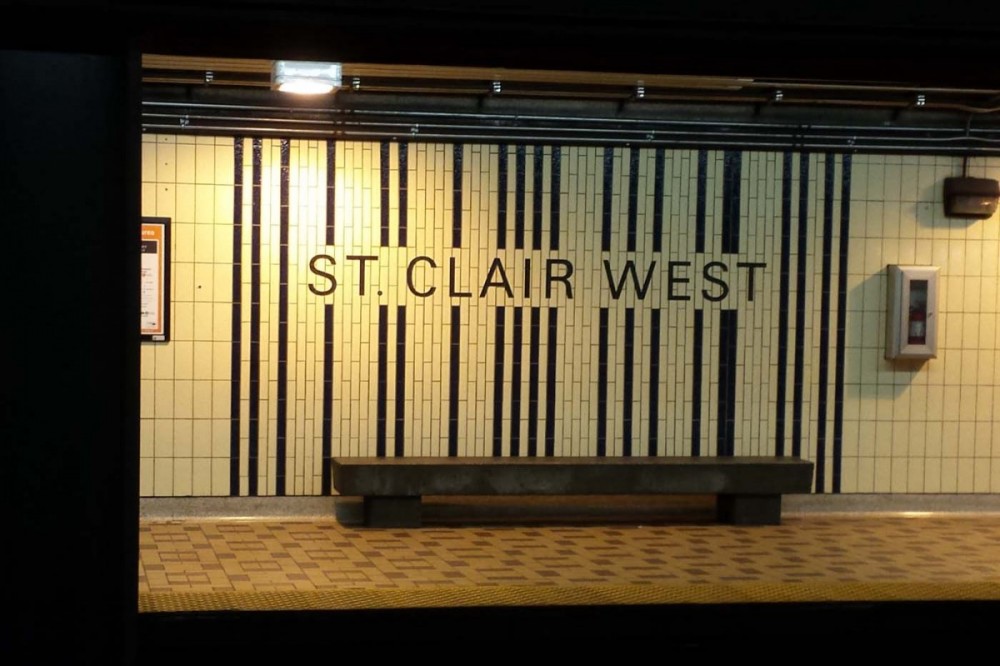 It’s not enough to just eliminate fares, though. Public transit and transit workers have been on the front lines of austerity as politicians cut funding, eliminate safety regulations, reduce staff, depress wages and privatize services. Drivers even face physical assault, most often over fare disputes. Free transit would increase ridership, which would require expanding routes and service. That must include hiring more workers and ensuring quality pay and good working conditions.

Last fall, the Amalgamated Transit Union (ATU) passed a resolution at its international convention to support a Green New Deal and to promote expanding public transit as a climate solution. Transportation accounts for almost a quarter of all of Canada’s emissions. Currently, less than one-third of Canadians use sustainable transportation to get to work. Improving transit and making it free would quickly change that. If that wasn’t reason enough, we could see the complete electrification of all buses in the next 10 to 20 years, quickly shrinking the second-largest source of greenhouse gas emissions in Canada.

Free transit would also mean creating thousands of good union jobs. Transit work is already low-carbon and crucial to our economy. Creating more jobs and ensuring decent pay and working conditions is a climate solution in itself.

WHAT ABOUT BETWEEN CITIES?

In late 2018, Greyhound ceased operations in Western Canada, leaving the provinces without inter-city bus service. A patchwork of private companies has cropped up, but service is costly and limited to a handful of routes. As radio producer Emily Leedham shows in her audio-documentary Still Waiting for the Bus, the departure of Greyhound has left many without a lifeline: seniors with no way to get to their doctors, Indigenous people prevented from travelling to or from reserves, people with disabilities stuck in their homes.

A Green New Deal should create a publicly owned and operated bus company in the Prairies. And that company should be electric. We already have one of the top electric bus companies in the world based in Winnipeg. Or better yet, we can nationalize the now nearly empty Oshawa GM plant in Ontario and re-tool it to make electric vehicles and buses. In my last column, I laid out how doing so would create 13,000 permanent unionized jobs and generate profit within five years. (See also Our Times' Winter issue feature, "Save This House: A Green New Deal for Canada, Now!") 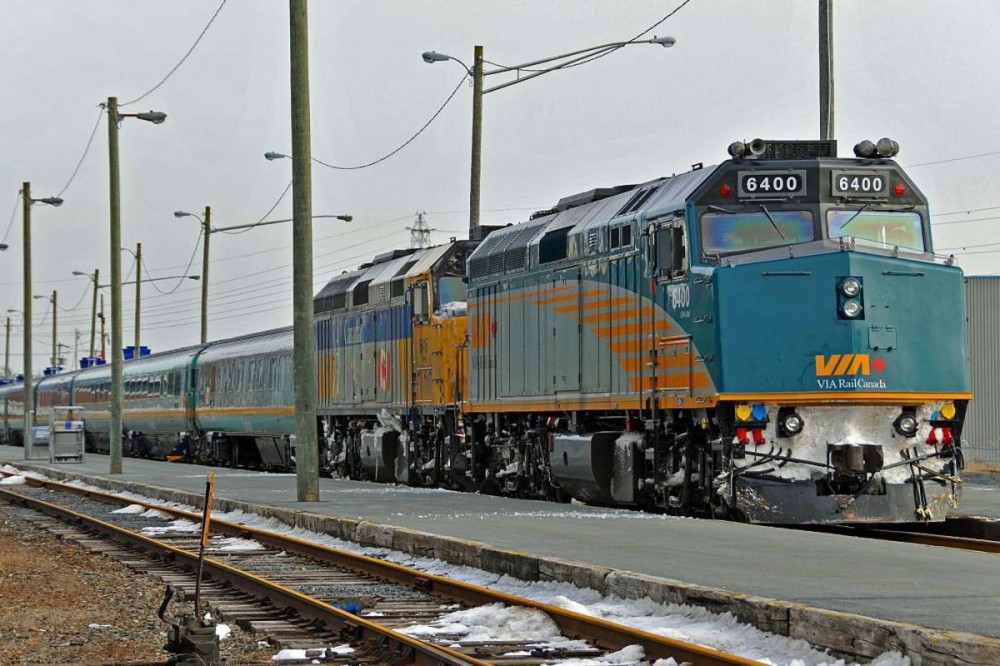 VIA Rail. PHOTOGRAPH: OUR TIMES

Improving Canada’s rail system requires less imagination and more of a look at history. Japan built its first high-speed rail in 1964. The “bullet train” took passengers from Tokyo to Osaka at speeds of 210 kilometres per hour. Since then it has expanded routes and increased speeds to 300 km/h. Meanwhile, in Canada, Via Rail passenger trains currently max out at 160 kilometres per hour. In Korea, China and in other parts of Japan, trains that use magnetic levitation (maglev lines) can reach up to 430 km/h. Going that speed, you could leave Windsor at 7:30 a.m. and be in Quebec City by 9 a.m. or Halifax by 11a.m. Trains emit approximately 10 times less greenhouse gases than flights, so reducing air travel between those cities would have a drastic effect.

Not everywhere will be suitable for high-speed rail, but numerous studies have identified the Windsor-Quebec City, Calgary-Edmonton, and Vancouver-Seattle corridors as prime routes. The Green Economy Network estimates that building those lines would cost $25.7 billion, but would create over 100,000 good, unionized jobs.

These ideas should just be the beginning. Last spring the Green New Deal framework came north and quickly captured the national attention; volunteers organized 150 town halls with more than 100,000 people attending, to help define a Green New Deal for Canada. Now, with fare-free transit groups in a dozen cities, momentum is building.

In this moment of political possibility, it’s time to exercise our utopian imaginations and dream of the world we want — not just the world we think is possible.

James Hutt is a member engagement, organizing and outreach officer for the Canadian Association of University Teachers (CAUT).

This article originally appeared in Winter 2019-2020 of Our Times Magazine. Support our work by subscribing today!