Working with Courage and Care 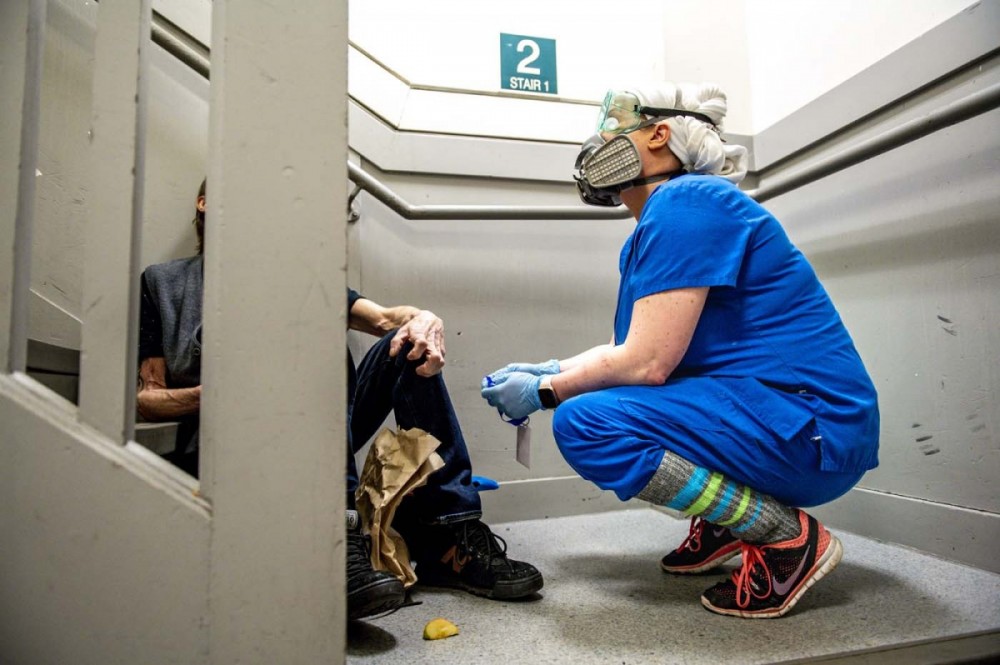 Brionne Kennedy (right) assists a Maple Hotel resident having trouble climbing the stairs after the elevator broke down, by offering to move his belongings to a vacant room on a lower floor. PHOTOGRAPH: JOSHUA BERSON

“I love being a first responder and saving lives,” says mental health worker Brionne Kennedy in a telephone interview with Our Times. Trained in First Aid and a member of the Canadian Union of Public Employees (CUPE) Local 1004, she is employed with PHS Community Services Society, a charitable, non-profit in Vancouver’s Downtown Eastside.

For the past three years she has worked at the Maple Hotel, which houses 70 residents. She works 12-hour shifts, three days a week, alongside one other co-worker. A single mother, Kennedy has been on personal leave since August 2020, and looks forward to returning to work soon.

“These are the among the hardest people to house,” she says. “They have mental illnesses, drug addictions and have experienced extreme trauma. At the beginning of the COVID pandemic we couldn’t use narcane (a prescription drug to counter the effects of opioid overdose) because of the risk of the airborne virus. This was a crazy position because it meant we weren’t able to do anything and people were dying and workers were traumatized. People are dying in the community every day. Kids as young as 14 are using fentanyl.”

Kennedy says once the initial fear of the virus lessened, she was able to go back to administering narcane. “Our staff are willing to take the risk.” She also points out that the workers, not the residents, are more likely to spread the virus because they move around the city much more.

Kennedy had to increase to twice a day her task of cleaning the shared bathrooms on all eight floors of the Maple Hotel, as well as the stair railings and the elevator. “When you are up there cleaning, you find things out,” she adds. “You aren’t behind a desk.

“Eighty per cent of the residents have hoarding issues. We have to go in to the rooms and clean them out. There are open syringes and bugs, too. We shovel it all out. One room took 13 hours to clean, and we filled 40 garbage bags. We put in a new mattress and clean sheets. And then the hoarding starts up again. It’s really about damage control with people who don’t know how to take care of themselves. We make sure they are eating, they’re safe and seeing the right doctors and nurses. The hotel is the end of the line for them.”

I've Learned to Be Scrappy

Everyone knows each other around the community, Kennedy says, and there are few cases of residents harming each other. But it doesn’t mean there aren’t dangers. Night shifts are more chaotic than day shifts. Kennedy has experienced both. Some residents stay up all night and sleep during the day. “When I go in, I have to prepare myself for a crazy night.”

Strangers have pushed their way in through the hotel entrance and Kennedy has had to chase them out, including one man who pointed a gun at her. She remembers one night shift when there was a fire on the seventh floor, a flood on the sixth and the electricity was blown on the fourth. “I’ve learned to be scrappy. I flipped the switches, turned off the water system and shut down the alarms at the back. There isn’t a dull moment.”

A mother living in a northern BC town recently telephoned Kennedy to thank her for helping bring her daughter home. The family reunion happened after Kennedy made a connection with the woman’s daughter, who had been living in the Downtown Eastside for five years. On the way to work, Kennedy would see her in the alley. She started bringing her cereal and milk, and they would talk. It was during those conversations that Kennedy encouraged her to call her mother.

“The reality is you have to have low expectations, and you can’t invest too much in hoping people will get out — because many don’t. You have to watch for burnout, too. It creeps up on you. You are doing room checks and you find someone dead. It’s hard to put that emotion somewhere because you care about the residents.

“Ever since I was young, I wanted to help people. If I can make one person feel better, it feels good.” Kennedy praises community helpers including the workers at safe injection sites, police officers — and her union. “I love that my organization was started by a mental health nurse. I’ve met so many passionate, like-minded people who care.”

Brionne Kennedy is one of the frontline workers featured in Our Times' Winter issue cover story about the BC Labour Heritage Centre's pandemic project called "COVID Chronicles: BC's Labour Story." (Don't forget to renew your subscription!) Our Times would like to thank photographer Joshua Berson and everyone else at the BCLHC, including executive director Donna Sacuta, for all your help. Thank you as well to writer Janet Nicol for pursuing more interviews with frontline workers in BC, including this one with Brionne Kennedy.

This article originally appeared in Winter 2020-2021 of Our Times Magazine. Support our work by subscribing today!