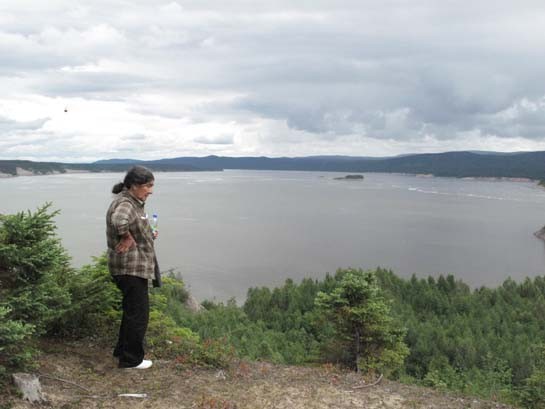 Elizabeth “tshaukuesh” Penashue, An Innu Elder From Sheshatshui, Labrador, Has Committed Her Life To Protecting The Environment For Her Children And Grandchildren. She Opposes The Dam At Muskrat Falls And The Destruction It Will Cause The Mista-shipu (chu

Scientific evidence tells us that climate-change deniers have had their day, and that day is long past. At some very deep level, I know we humans are in trouble. Most of the time, in the frenetic rhythms of daily life, I try to avoid knowing. I can hardly stand to know. I push the numbers away into a dark, psychic closet and, with my shoulder to the wood and the full force of my body, I slam the door shut. But today, because I am writing, and you are reading, I will trust I am not alone with my fears for the biosphere. So, maybe this means I can take a deep breath, drop my shoulders and let one of those numbers out. Okay, two. Five tops.

Recently, the folks at Information is Beautiful created a powerful visual representation of their roundup of the latest, and most credible, scientific data on climate change. Basically, here's the score: if we can't keep carbon emissions down to 500 gigatons (Gt), this will mean that, by the year 2050, global temperatures will most certainly have increased by two degrees Celsius over pre-industrial temperatures. But, guess what — humankind currently emits 31 Gt of carbon per year and this number is increasing. It seems we are on track to blow our carbon budget in 13 years.

So, the numbers again: 500, 2050, 2, 31, and 13. Are you still there? If you're not, I think I may just have to go back to bed. Science. Numbers. They lead to one inescapable conclusion: If we are going to learn how to live in "a good way," in "right relation," or even survive alongside other species on this planet, we must decrease our carbon consumption immediately. The objective evidence is clear: climate justice demands we face up to the impact of our production and use of fossil fuels.

Workers know a lot about the different ways people have fought for social justice in hard times. One of the great and humbling lessons of activism is that social change does not come about through the efforts of frazzled individuals working alone. There can be no individual path towards climate justice. We have to find our way collectively, which means we need to learn, in some profound way, how to talk to one another. Without dialogue, we will end up creating more problems than we solve.

I've come to this conclusion because of my growing understanding that the creation of alternative energy sources is not without its own contradictions. Let's take hydroelectric power as an example. North Americans seem to have an insatiable appetite for electricity, and Labrador's Muskrat Falls, on the Churchill River, has caught the eye of public and private investors. Just outside Happy Valley-Goose Bay, the falls are the site of a massive new power generation and transmission project. Newfoundland and Labrador's energy company, Nalcor, was tasked with running the project. Emera Inc. is the private partner, and the federal government has backed the project with loan guarantees.

This project will provide hydroelectric power for consumption in Eastern Canada as well as New England. Employment is meant to peak in 2015 and, on average, there will be 1,500 direct jobs per year. The Keystone pipeline still faces stiff political opposition in the U.S., but hydro development strengthens the Canadian government's argument that Canada is an environmentally responsible energy producer. Maybe some of those now working in Alberta will be able to head home. Maybe there will be jobs for Aboriginal people and locals.

In the course of public consultations on the Muskrat Falls/Lower Churchill project, the Mokami Status of Women Council intervened because of the project's potential socio-economic impact on women. They asked the panel to look at violence against women, poverty, child care, housing, and mental health and addictions. They worried that, while the project might provide a good, if temporary, living for an influx of (mainly male) workers, there would be no investment in long-term community infrastructure. They saw, in the project, a lack of attention to the social cohesion of the community. They named similar projects where sexual and physical violence disproportionately affects Aboriginal women and women who live in poverty.

Aboriginal activists say the Muskrat Falls development will severely test the ability of the Innu and Inuit people to be the caretakers of the land. It will ensure they will end up consuming mercury-laden fish. Flooding will destroy the habitat of innumerable animals and the river will be forever diminished. Meanwhile, urban North Americans will continue consuming massive amounts of energy, the economic benefits will flow out of the region, and local women will be hurt. To top it all off, only 40 direct jobs will remain in Labrador after the construction phase, and the public utilities board is currently hearing an application for an electricity rate increase of 25 per cent.

Instead of calling this project a source of alternative energy, why don't we call it what it really is: an "infinite energy" project. An alternative energy project would have to be based on a different kind of economy, different employment relations, different political forms, and a dialogue that considers the welfare of seven generations hence. Infinite energy production maintains the fiction that we can continue living as we have been.

Labradorians have created space for the rest of us to question our assumptions about what is universally "good" or "ethical" about infinite energy projects. By asking their big questions, the Mokami women and defenders of the land have created space for real dialogue to occur. Perhaps, strengthened by their courage, we who benefit from this energy project and other such developments could humbly accept the invitation to a dialogue with those who are most affected by climate injustice — in all of its forms.

Teresa Healy is a visiting professor of sustainable development at the SIT Graduate Institute, in Brattleboro, Vermont, and a research associate with the Canadian Centre for Policy Alternatives.

She is also a singer/songwriter with the folk duo Healy & Juravich, and a member of the American Federation of Musicians (AFM) Local 1000.

This article originally appeared in Volume 33, Number 2 of Our Times Magazine. Support our work by subscribing, advertising, or donating today!