A Letter to Our Labour Movement 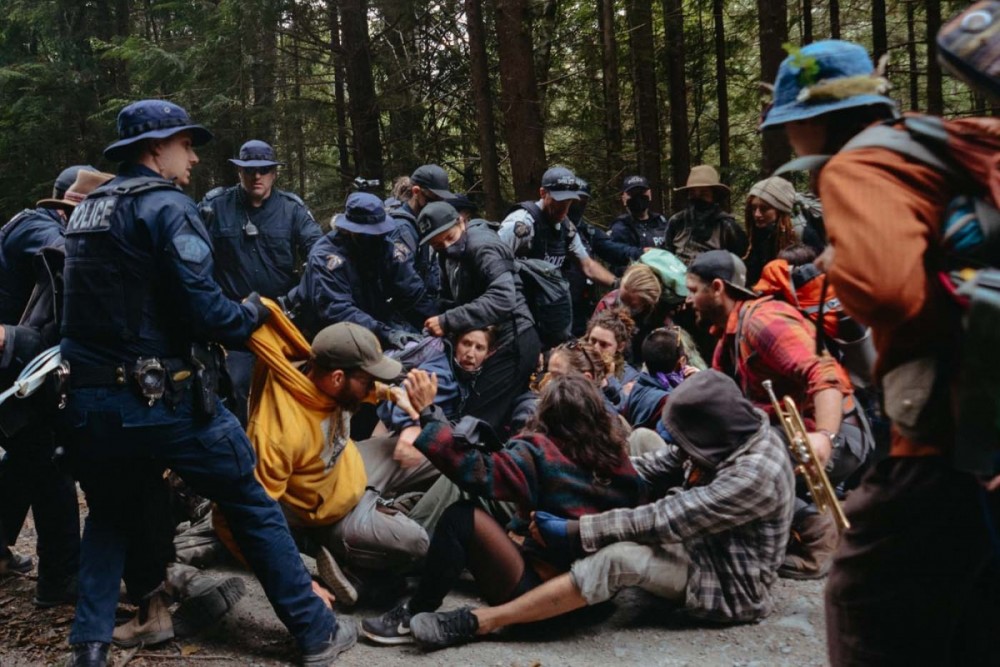 To Our Union Siblings and Fellow Workers:

In light of the August events at Ada'itsx/Fairy Creek, we feel compelled to reach out to you regarding the shocking police violence that was unleashed on demonstrators on Saturday, August 21. As longtime union activists, we firmly believe it is everyday workers, exemplified by organized labour, who not only create the physical reality around us we call society, but in fact have the ability to change it.

The images of August 21 were utterly appalling, with people being pushed and shoved by tactical officers while others were snatched and roughly thrown to the ground. Without warning, several cans of pepper spray were used on the crowd without so much as a hint of provocation. The reason given by police was to “gain compliance.”

This immediately brings to mind the events of January 20, 2020 at the FCL (Federated Co-operative Limited) refinery in Regina. In a parallel situation, union activists there were pushed and shoved by police as tactical officers picked off individuals and slammed them into the ground for arrest. At one point the police commandeered a union vehicle and clipped a union brother as they drove through the crowd, knocking him to the pavement.

We take time to write out these details, as it is important to emphasize the connection between these two events. The police violence at the Unifor 594 picket line in Regina was written off as an irrelevant labour thing at some back gate of a little-known refinery. The police violence at Ada'itsx is written off as a complicated Indigenous environmental thing at the end of some obscure logging road. Labour struggles, Indigenous struggles, and ecological priorities seem to be all too easily alibied away as unrelated subjects.

Indigenous activist Skyler Williams succinctly ties these back together when he says, “Injunctions are used almost exclusively against Indigenous Peoples and unions. It's important we have solidarity in fighting them.”

With sadness and frustration, we watch as forestry workers are played off against Indigenous and environmental activists by the very corporations that profit from their exploitation. This is framed most notably by the recent eight-month strike against Western Forest Products, triggered by the company’s attempts to compromise safety standards, reinterpret seniority rights, and shave off pension benefits. The money being made from the wanton exploitation of the forest is steeped in the alarmingly high mortality and injury rate that forestry workers are subject to under this corporate “business as usual” model.

Breaking Down the False Division

For this reason, unions have been striving to break down this false division and show that workers’ struggles, Indigenous struggles, and ecological balance are in fact intertwined. Not just in the general sense of shared interest in a precarious ecosphere, but also in the specific sense of workers (both Indigenous and non-Indigenous workers), Indigenous communities, and the environment all being ruthlessly exploited by a predatory logic pocketed by corporate greed.

That certain union spokespersons are now issuing appeals for injunctions to be enforced by police is a worrisome development. A trap is being set for the workers movement because it is workers themselves who are targeted by such enforcement. That these union spokespersons are also basing their appeals exclusively on allegations made by industry sources, who claim Ada’itsx defenders have shifted their “tactics,” sows more confusion still.

The situation on the ground continues to unfold. The injunction against Ada’itsx defenders was lifted on September 28, on account of officers concealing their identities and brandishing “Thin Blue Line” insignia, while using heavy-handed methods excessive enough to bring the provincial court into disrepute. A week later, the injunction was reimposed at the behest of the company interests of Teal Jones. Indigenous and environmental activists have remained committed to their practice of peaceful civil disobedience, and established an information picket line outside of the BC legislature on October 4. Industry sources have responded with spurious claims, once again, that Ada’itsx defenders are engaging in extremist tactics.

Focusing on the practical task at hand, we humbly request that you please take interest in and follow the ongoing struggle at Ada'itsx/Fairy Creek. In our current social context, we realize that asking our unions to weigh in on such matters is generally considered to be beyond their scope of practice. Out of this conflict, though, perhaps a deeper sense of purpose can be derived — a renewal of what it is that is understood to be the concern of unions. We are confident that the principles, purpose, and objectives of the labour movement are up to the task, and only ask that they are in fact applied.

In Solidarity,
A Collective of Union Activists