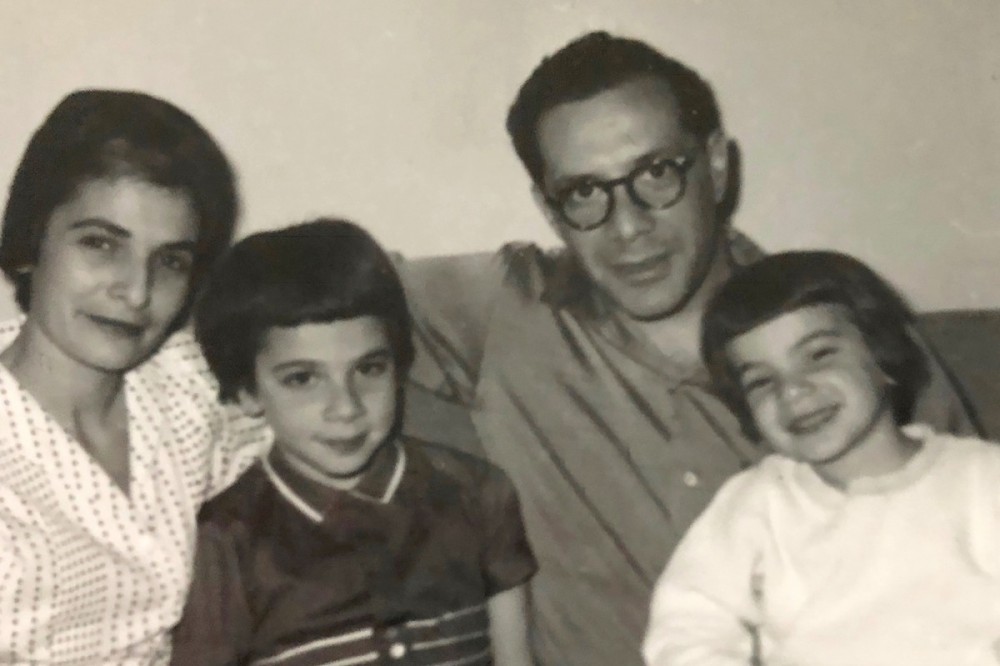 “It’s ok,” my dad reassured me. “Someone in our club will stop and help us.” It was a windswept winter day in near-blizzard conditions. My dad and I were driving from Ottawa to Toronto along Highway 7 in our VW bug en route to visit my grandparents. I was nine or so, circa 1960, years before Highway 401 would be built. We had veered off the road somehow and were stuck in a snowbank on a desolate stretch of highway somewhere past Peterborough, decades before cellphones and roadside assistance plans. We didn’t even have a car radio.

My dad was a relatively new driver. Neither he nor my mom knew how to drive when, in their mid-thirties, they bought their first car. I’m sure they bought the Volkswagen bug because it was the cheapest car on the market. They traded the use of the bug in exchange for driving lessons from a friend. My sister and I loved the grey bug with its front seat, back seat and a “back-back” cubby hole that my sister and another small child could squeeze into.

“What club?” I asked. I wasn’t worried. I just wanted to know. “The Volkswagen Club,” my dad said. I’d never heard of the Volkswagen Club before, but I had complete confidence in my dad. My dad just knew things. Like when I asked, “How do they know what to put on the sign for how many miles it is to Toronto if they don’t know where you’re going in Toronto?”

“It’s the number of miles to the centre of the city,” he answered definitively.

Geography was a favourite pastime in the car, a step up from the game of I Spy. My dad knew hundreds of names of cities, towns, countries, lakes and rivers. And he knew lots starting with “A.” If someone said “Alberta,” you took its last letter to come up with a new place starting with “A.” That meant you needed a trove of “As” because so many place names end in “A.” My dad could rhyme them off endlessly: Atikokan, Afghanistan, Athabasca, Abyssinia, Antarctica, Appalachia, Almonte. So, I knew that if my dad said there was a Volkswagen Club, it had to be true.

My dad had a hardscrabble childhood growing up in Toronto during the Depression years, the youngest child of Yiddish-speaking immigrants who had come to Toronto from Eastern Europe via Ellis Island and the sweatshops of New York. They lived on St. Clair Ave. above first a dry goods shop and then a millinery store. His parents, my Bubby and Zaidy, worked in the store while Bubby’s mother looked after the kids and cooked. But they lost everything when the stock market crashed, including the cash register they had just bought for $500. There was little work and the times were hungry: Bubby made holes in potatoes and stuffed them with bits of meat, but only for the kids.

My dad was already a champion of the underdog by the time he was in high school. As soon as he could he got a job delivering telegrams on his bicycle all across the city. He went to work on a peach farm in Niagara the summer after 5th Form, was drafted into the army and went to the University of Toronto on a veteran’s allowance after the war.

After a few odd jobs and occasional bouts of unemployment, my dad got his dream job in the union and we moved to Ottawa. My sister and I loved going to his office looking out over Confederation Square to watch the parades, play with the adding machine and eat the Arrowroot cookies stashed in his desk drawer. But my dad didn’t just work for the union. He believed in the union and workers’ rights with all of his heart and soul. We joined picket lines with our homemade signs and learned all the union songs before we could read: Hold the Fort, Union Maid, Solidarity Forever. We didn’t really understand the lyrics: When the union’s inspiration through the workers’ blood shall run / There can be no power greater anywhere beneath the sun / Solidarity Forever/ For the union makes us strong. But we loved the tunes and sang them with gusto anyway.

I’m not sure how long my dad and I stood in the snowbank, shivering as we huddled together against the wind. Our eyelashes caked with snow, we squinted as we peered through the drifts swirling around us, hoping to clap eyes on a VW, hoping one might see us. There were hardly cars of any kind on the road in the storm. When I got really cold my dad let me sit in the car for a few minutes to get warm. But we didn’t want to run out of gas, so I’d get out and stand beside him as we tried to flag down help.

Finally, a VW bug stopped and asked if we needed a ride. My jaw dropped. A nice man took us to the nearest gas station a few miles down the road. I waited in the coffee shop drinking hot chocolate under the watchful eye of the waitress while my dad went off with the tow truck driver to retrieve our bug.

I don’t remember feeling scared. It was exciting! I couldn’t wait to tell my Bubby and Zaidy and later my mom and sister about our grand adventure. “Wow, Dad,” I said admiringly after my dad returned with the car and we were carrying on toward Toronto. The snow had let up a bit by then. “You sure were right about the Club.” “Yup. That’s Volkswagen solidarity,” he grinned.

“Ahh,” I thought. “Now I know what solidarity means.”

Gil Levine (1924–2009) spent his life working for social justice and was the founding director of research at the Canadian Union of Public Employees (CUPE). A great lover of folk music and an enthusiastic supporter of folk musicians, Gil believed in the collective power of song to bring people together to speak up and sing out for change. Gil and his wife, Helen, hosted annual May Day gatherings and hootenannies for decades.

Tamara Levine, Gil’s elder daughter, coordinated workplace literacy programs with the Ontario Federation of Labour and the Canadian Labour Congress. She is a member of the Gil’s Hootenanny team, which has hosted an annual May Day singalong since 2010. Gil’s Hootenanny is proud of its connection to working people and the labour movement and is honoured to have the support of CUPE, PIPSC, PSAC/NCR and Ravenlaw.

In 2022, Gil’s Hootenanny looks forward to bringing people together to sing songs of protest and hope, belting out their belief in the power of collective singing for change. The 2022 Hootenanny will take place on Sunday, May 1st at 2 p.m. in Clark Hall at the RA Centre, 2451 Riverside Drive, Ottawa. The RA Centre is staffed by members of Unifor. Tickets are $10. See gilshootenanny.ca.

This article originally appeared in Spring 2022 of Our Times Magazine. Support our work by subscribing, advertising, or donating today!