WHY ARE HOMELESS PEOPLE ALLOWED TO DIE IN TORONTO? 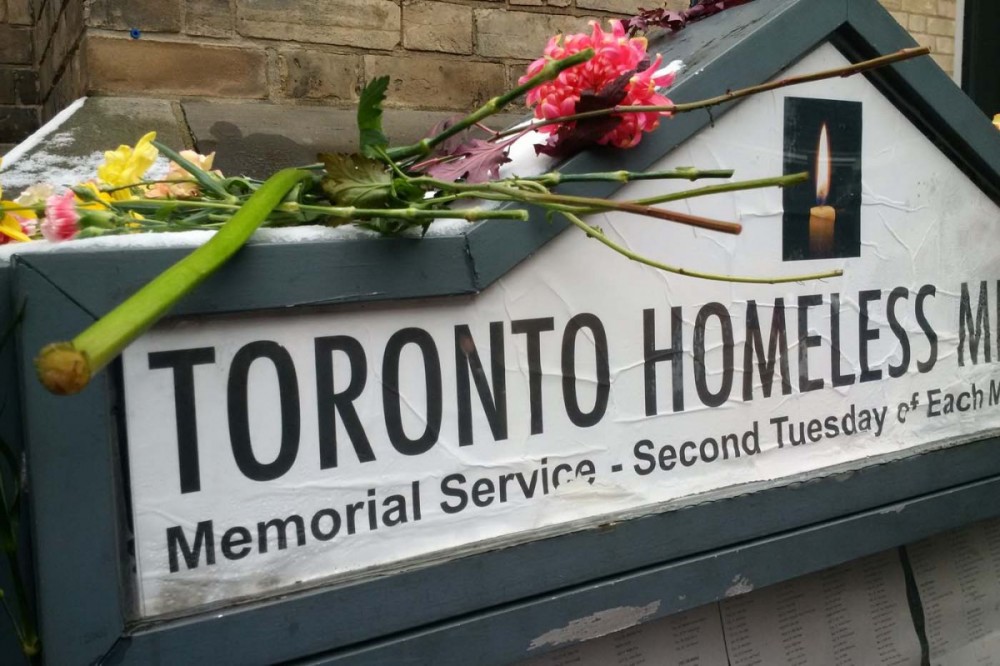 On the second Tuesday of each month, at noon, a memorial service is held outside the south door of Holy Trinity for those who have died as a result of homelessness in Toronto. PHOTOGRAPH: CATHY CROWE

On November 7, the Ontario Coalition Against Poverty (OCAP) held a vigil for Kevin Dickman, a homeless man in Toronto, whose body had been pulled from the Don River the previous month. We gathered outside the Peter Street referral centre that homeless people attend to try and access a shelter bed. It has always been billed as a place of last resort, where those who have no other options may go. Theoretically, people in the facility are waiting for a shelter bed but, in practice, the chairs or floor in the waiting room are often all they get. Recently, however, even this last resort has failed and a 50-person limit has been placed on those who can wait for shelter in the centre. Now, people with nowhere else to go are turned away into the night.

The following week, the City of Toronto, under pressure from the community, opened its Metro Hall facility as a "warming centre" for homeless people. The onset of early cold weather, before the normal winter response measures were properly in place, had thrown the overstretched shelter system into crisis.

City TV aired a rather good segment that counterpoised the lies and evasions of the shelter bureaucracy with the reality of a system that has been overwhelmed. The 7,000 people forced into Toronto's main shelter system every night, the hundreds who must make do with substandard backup facilities, and the huge numbers who have no shelter options whatsoever, all know the system can’t cope, as does any service provider seeking bed space for a client. I don’t propose to haggle here with the wretched apologists for the City who will pretend everything is a little strained but under control. I want, rather, to respond to the abandonment of people on the streets in a city that drips with wealth and try to grapple with why this is so. 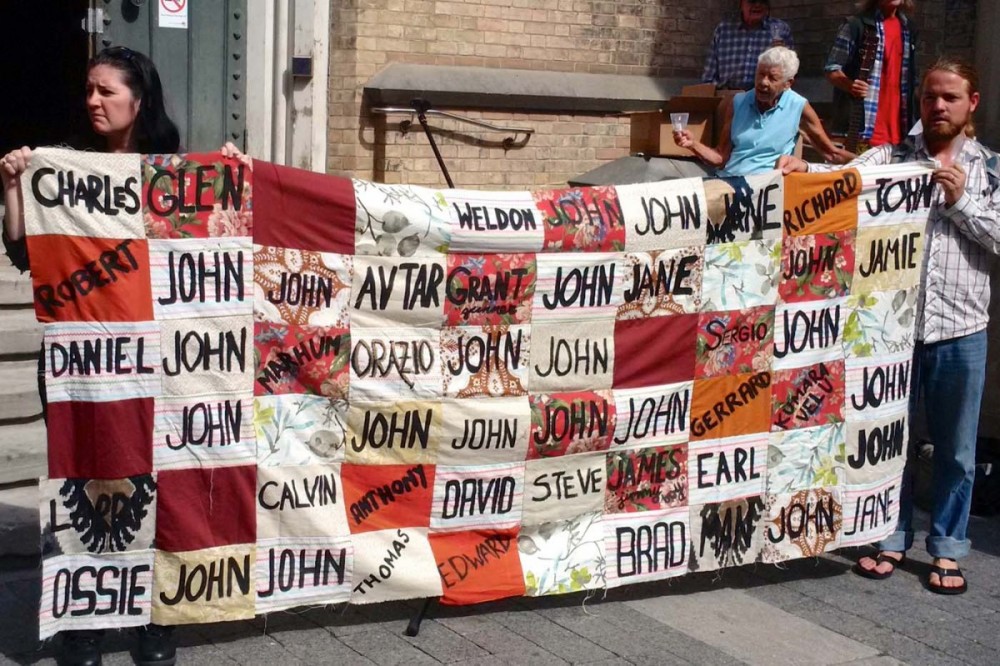 There are many “Johns” and “Janes” on this quilt, made in 2016, representing people who had died in Toronto and were never identified, and so were listed as Jane or John Doe. PHOTOGRAPH: CATHY CROWE

On November 6, the day before our vigil on Peter Street, the City issued a media release on its "winter plan for people experiencing homelessness." I want to draw attention to the opening words: "Homelessness is an extremely complex issue and the City of Toronto continues to experience unprecedented demand for emergency shelter." Complexity can be an attractive place of refuge for those who want to avoid or delay necessary solutions.

Obviously, if the intensifying homeless disaster is the result of multifaceted and unfathomable processes, then the failure to respond to it can be justified. However, I’m going to suggest that this assertion is complete nonsense. At root, homelessness and its rapid growth are not at all hard to understand. People don’t have housing because it is simply unavailable at rents they can afford to pay. A whole series of secondary factors may be at work that make some people more vulnerable, but millionaires with addiction issues and billionaires with emotional troubles are not sleeping on the streets. Inadequate income and impossible rents are the primary causes of homelessness and, once this situation has been created, the failure to provide even enough shelter facilities renders it all the more dreadful and life threatening.

Armed with longstanding moral assumptions about flawed "architects of their own misery," the politicians and bureaucrats look for the source of the problem in lifestyle choices and supposed character deficiencies. Mayor John Tory, even as his developer friends create an oversupply of luxury housing and drive up rents, seriously suggests that homelessness is the product of a "mental health crisis." Clearly, a mounting agenda of austerity has attacked systems of social provision, particularly income support and social housing, making people ever more vulnerable to homelessness. At the same time, upscale urban redevelopment, treating housing as a pure commodity, has squeezed out cheaper options and driven up rental costs.

Here you find the very-far-from-complex driving forces that underlie increased homelessness and a broader housing crisis. All three levels of government are complicit in this process but it is with the municipal level that the failure to ensure even adequate shelter facilities lies. So, I return to the initial question raised in the title of this piece, "Why are homeless people allowed to die in Toronto?"

For years, Toronto’s official policy of not allowing the shelters to go over 90 per cent occupancy levels has been disregarded by City Hall and its senior functionaries. It has been adopted and reaffirmed but never complied with. It becomes obvious, when you are active on this question, that they don’t want to enforce the policy. That is to say, they don’t want a system of provision for the homeless that is anything close to decent and safe.

Toronto is the biggest city in Canada and those who face economic dislocation tend to gravitate towards the major urban centres to try and survive. Moreover, relative to most parts of the country, the winters here are less severe. The most overtly reactionary members of City Council often lace their remarks in the Chambers with references to people from outside of Toronto filling the homeless shelters. They appreciate that a shelter system more endurable than other cities offer might increase the numbers trying to survive here. They simply don’t want the prospects for survival in this city to be better than elsewhere and would rather induce the homeless to move on. 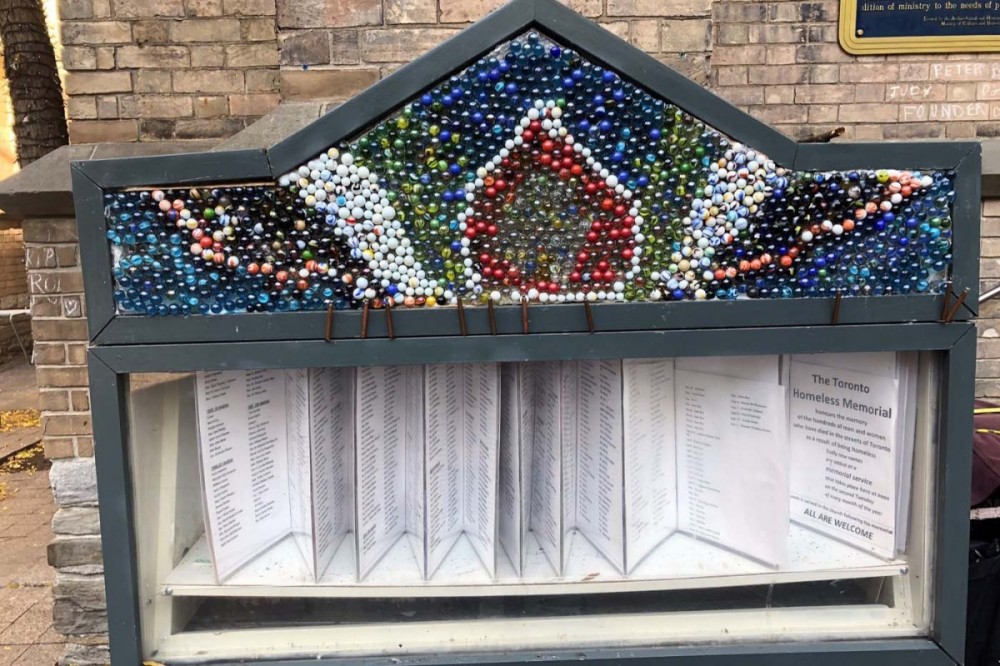 Marbles are given out at each memorial to commemorate the person who died. So many have died that the memorial needs a lever system to read the names. You move the metal pieces to view the pages. PHOTOGRAPH: CATHY CROWE

The neoliberal city model of urban redevelopment, which City Hall is the political nerve centre for, places a great deal of emphasis on extreme concentrations of residential and commercial wealth in the core area. The homeless also tend to concentrate in this area as the best location for survival. The pushing out of those on the streets, by way of police repression and the removal of shelters and services, is a key priority. Yet, when homeless people establish encampments outside of the central area, they are also persecuted relentlessly. The developers, speculators and capitalists concerned with high-end recreation and tourism all create the conditions that generate poverty and homelessness.

At the same time as they fuel destitution. However, they want its visible manifestation to be driven from sight and prevented from returning. The municipal level of government is the one that is most directly concerned with servicing that portion of capital that invests in property. It is no wonder that City Hall knows where its loyalties lie as it discharges its role of reluctant provider of shelter from the elements.

Faced with this agenda of abandonment and social cleansing, we must unite to increase our struggle to ensure no one is left on the streets. However, we must go beyond that and challenge the callous agenda under which housing is provided only to those who have the price of admission to the neoliberal city, while everyone else must live on the precarious margins, accept the streets or hope for survival elsewhere. That means a fight, not just for more shelters, but for decent and safe housing for everyone as a matter of right.

John Clarke was an organizer with the Ontario Coalition Against Poverty (OCAP) from its founding in 1990 until his retirement in January 2019. He remains an active member and anti-poverty activist. Visit the Toronto Memorial website for more information.

This commentary is published here with the author's permission. It was first published on the author's blog, and you can now also find it in Spring Magazine.