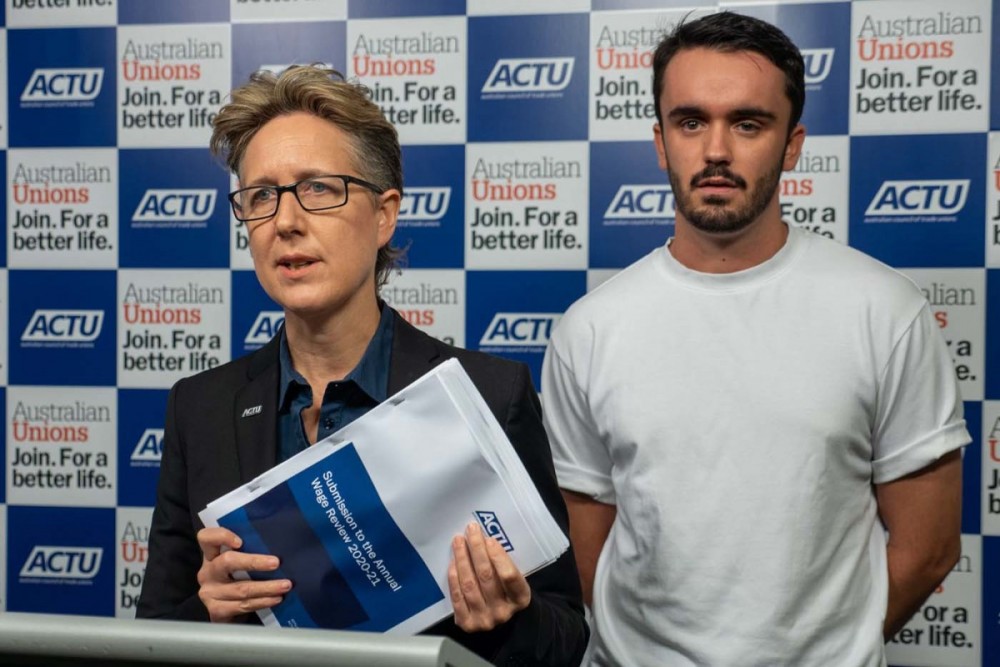 Just to shake things up a bit I’ll be asking a transparently rhetorical question each column from now on. Let’s start at the top of the union food chain and ask the Canadian Labour Congress: Is mass lobbying really the best use of the CLC mailing list?

Recently the congress has expanded its email repertoire a bit with invitations to a series of worthwhile webinars. But how about some direct solidarity actions? As I write this, I can count five lockouts in effect across the country. There may be more. How about mobilizing workers to support workers? Some down-and-dirty quick solidarity and, dare I say it, class consciousness-raising across, over, under and around those pesky silos all major unions seem to have built for themselves? 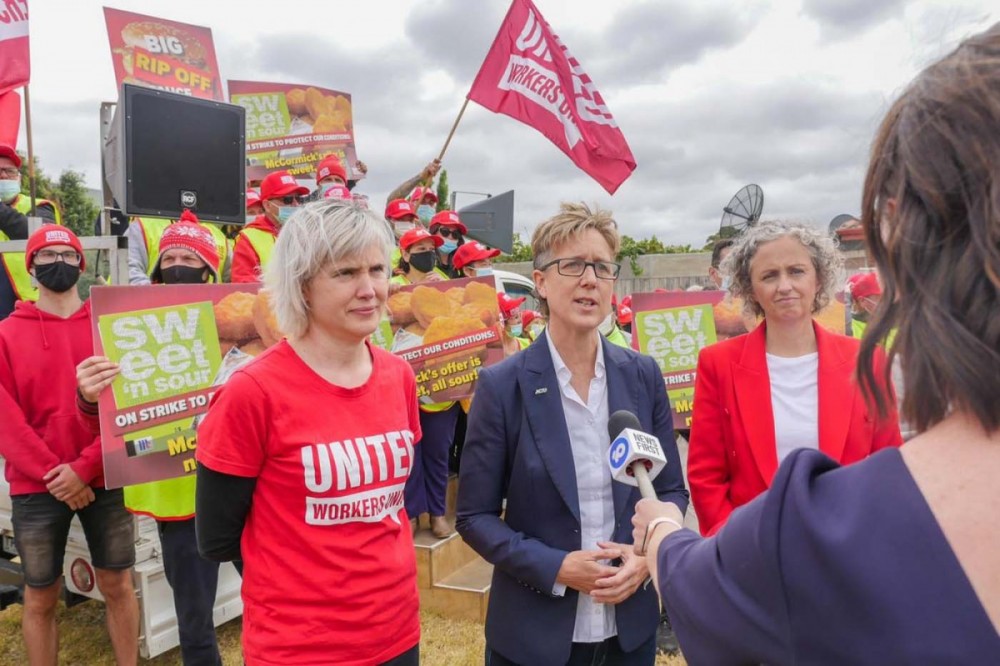 For reasons rooted too deeply in my subconscious for me to figure out on my own, I check the Australian Council of Trade Unions’ (ACTU) website at least three times a week. ACTU’s videos, which have been viewed at a phenomenal number of times since the pandemic began, are great. There’s lots of campaign material, of course and, inevitably, lots of material related to C-19. But there are also lots of deep-organizing campaign components, too. And, by the way, deep organizing is what the current all-women leadership got themselves elected to do. Imagine this kind of organizing happening elsewhere. Say, in Canada, for example. All-women, class-based organizing at the national level. It boggles the mind.

To be fair, at the start of the pandemic there was also quite a bit of exciting stuff that was seen only in Canada: for instance, national union leaders getting up close and personal about what their unions were up to as COVID-19 whacked us. But these warm missives have now apparently disappeared, for reasons that are unclear to me and everyone else, including some union communicators I know.

The most striking (sorry) ACTU video that I’ve seen was of ACTU Secretary Sally McManus who, for five engaging minutes, explains what she does in her day or how lobbying works when the government hates the fact of your existence and the Labour Right faction is ascendant. The video is interesting not so much for the details, but just because it was done, and what the fact that it was done says about union leadership styles in different cultures. (Lest we develop a sense of national trade-union audio-visual inadequacy, let me just say that the ACTU’s video collection is way easier to find on its Facebook feed than on its website.)

Oops. I almost succumbed to the temptation to remind you that putting all your eggs in the Facebook basket may not be a problem today, but it will be a problem someday. 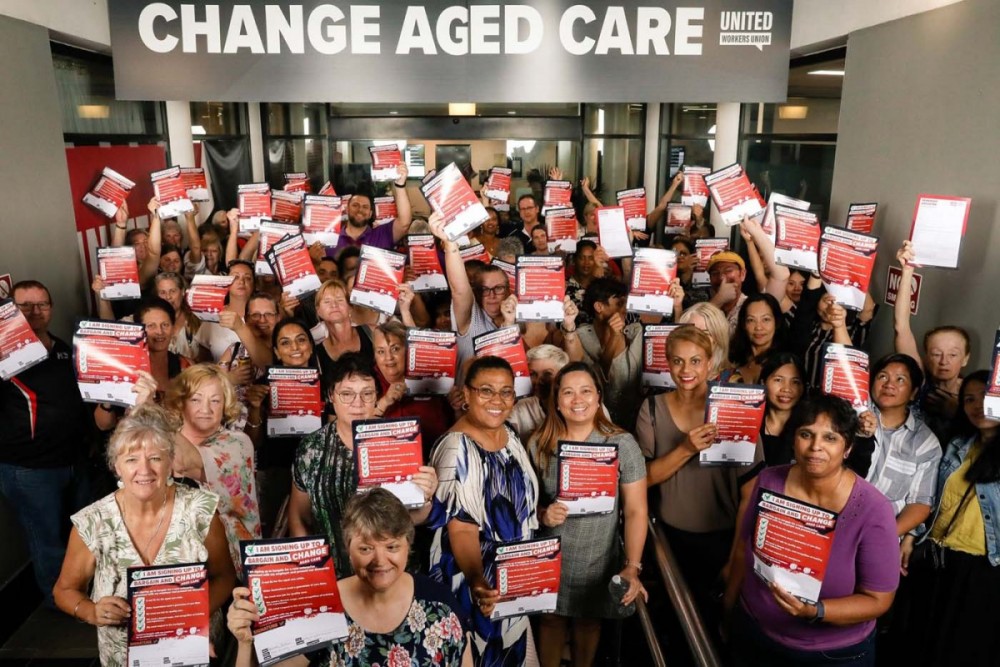 Also from Australia: AI is making a splash with hospitality workers. The United Workers Union (Sigh. I miss their prior moniker: The Miscellaneous Workers Union) has launched Mobilise, its anti-wage-theft mobile app. Wage theft in Oz runs into the hundreds of millions of Aussie dollars every year, making it a big problem, one that the UWU is organizing around with noticeable success. Not a week passes by without some giant retailer or fast-food chain admitting to wage theft in order to avoid the extra penalties that a court would add to the cost of restitution.

The thought that all of the ACTU videographers’ good work may disappear when Facebook goes the way of Myspace may eliminate your feelings of comparative inferiority. To get those feelings back, visit the U.S.-based “Empathy Media Lab” and watch Marc Belanger’s video podcast. Marc’s name not ringing any bells? He is a retired Canadian Union of Public Employees (CUPE) communications staffer who was the very first head of that union’s technology department, and the coding brains behind SOLINET, CUPE’s early 1990s kinda-intranet, kinda-BBS (bulletin board system) – which became the global movement’s BBS when CUPE opened it up to members of other unions.

Marc later left CUPE to pioneer the use of online labour education tools while he served as director of ACTRAV, the International Labour Organization’s (ILO) worker education program. He’s now the looks behind RadioLabour, produced from his home in Peterborough, Ontario.

Unions21 & Reasons to Love Them

Over in the UK, the good folks at Unions21 (as in 21st century) have been busy, too. Yes, yes, I know: Unions21 gets regular mentions here. But there’s always a reason to love them and what they do. Always.

The week before I scribbled these words, Unions21 had a web-based release party for their report, “COVID-19 and the Work of Trade Unions: New Challenges and Responses,” on how British unions have adapted to the pandemic: what worked and what didn’t; what should continue and what should get flushed at the first opportunity.

This is in addition to their usual but still impressive stream of efforts. My current favourite is the “Officer Hub,” a multi-media education smorgasbord of e-newsletters and self-directed webinars, for local union officers. Not all of what Unions21 produces easily migrates to the Canadian context, but enough does that it’s well worth the effort to check out their resources.

Also from the UK comes the Trade Union Congress (TUC) Digital Lab’s take on how unions have fared in trying to shift meetings and conferences online. The recording of the Unions21 webinar on the subject is the best place around to find out how your union could do better.

Since you’re visiting the Digital Lab anyway, feast your hungry peepers on how the response of British unions to the pandemic has opened up whole new organizing vistas for workers who are normally hard to reach and who became even harder to connect with after C-19 hit.

The annual Trade Union Website League Table 2020 measures and ranks the most influential British unions’ web presences. You’ll find this entertaining, if not informative. I will pay a tonne of toonies to anyone doing something similar for Canadian unions.

Next time someone speaks dismissively of “slacktivism,” here’s your comeback: “What is slacktivism and can it change the world?” And its from Australia, no less.

As I write this, Amazon Web Services (AWS) is the culprit in a minor bit of internal fuss at LabourStart. Like a lot of volunteer-based organizations, we have to keep an eye on our finances. With that in mind, last year we moved from using Mail Chimp to using Sendy for our mass mailings. Sendy was way cheaper and had the additional appeal to us of being a piece of software residing on our server, which meant we could do a better job of controlling it. We wouldn’t be dependent on Mail Chimp’s financial stability to ensure that we could do a mailing when we woke up next Thursday. Sendy would be there for us.

Well, it was there for us, but it turned out that “being there” isn’t as valuable a trait as we thought it was. Sendy is dependent on AWS to provide it with a window to the rest of the internet. After a few months of regular LabourStart mailings, we noticed a drop in take-up for our campaigns. At first, we attributed this to the effects of the pandemic, with union staff, officers and activists all too busy learning how to function in the “new normal” to pay attention to our appeals for international solidarity.

That thought lasted a month or two. Still, we couldn’t help thinking that, if anything, the number of respondents should start to rise once people had settled into the new, online ways of working. So, Eric Lee, our websteward, did some legwork and easily pegged the reason for the drop to the date of our software changeover. Worse still, when he did some comparison mailings using both Mail Chimp and Sendy/AWS, the numbers all ran nearly 30 per cent in Mail Chimp’s favour. Significant chunks of our mailings just weren’t getting to their destinations. If you were using a French or a Brazilian ISP, for example, you had about a one-in-10 chance of getting one of our Sendy messages, while you were pretty much guaranteed to receive something sent via Mail Chimp.

This is not good. Don’t be tempted. And, whatever service you’re using right now, even Mail Chimp, remember to periodically test it to confirm that it’s working as it should.

And if it feels as though those regular checks-ins are eating into your personal time, check out We Clock, an app that you and your co-workers can use to track just how much time you spend doing work. After you use it for a while as the keystone to a work-life balance campaign in your workplace, let me know how it turned out. You can find it on your fave app shop or go see their WeClock’s website.