How Our CPP is Propping Up Bolsonaro 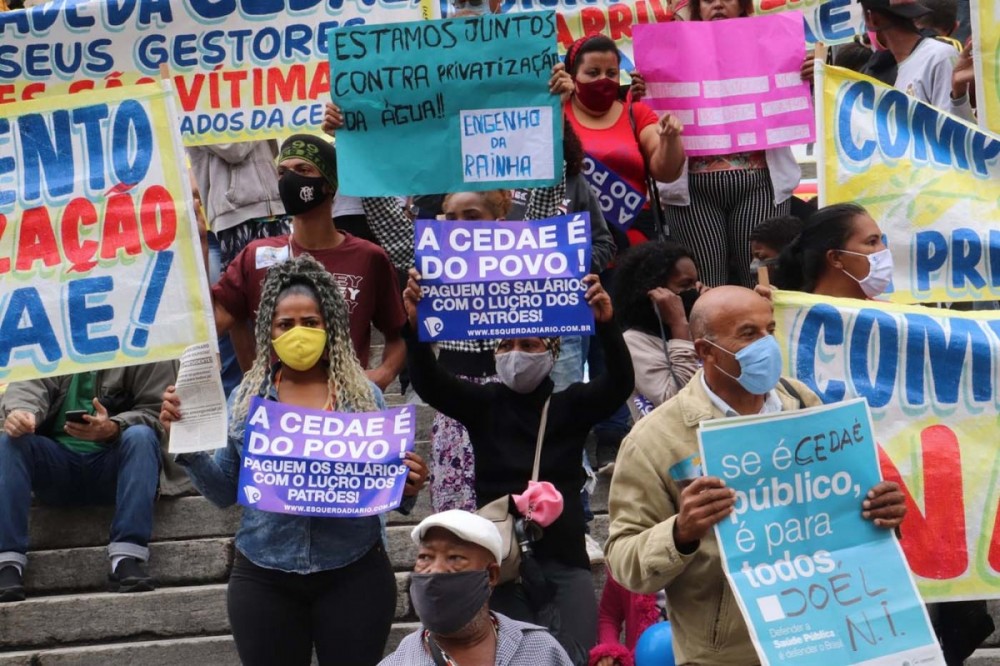 Demonstration in front of the Rio state legislature on the eve of the privatization. PHOTOGRAPH: SINDÁGUA-RJ

Canadians need to know that over $900 million dollars of their public pension money is being used to privatize water and sanitation services in Rio de Janeiro, Brazil. The CPP Investments Board, which manages the contributions Canadians make to the Canada Pension Plan, and the Alberta Investment Management Corporation (AIMCo), the province’s public retirement funds, recently bought Iguá  Saneamento, a Brazilian water and sewage company that has 18 long-term contracts for the provision of private water services to more than six million people. Iguá sought this injection of capital so that it could participate in the legally contested privatization and April 30th auctioning of Rio de Janeiro’s public water utility.

Public Services International (PSI), a global federation of over 700 unions, is actively working with affiliates and civil society organizations in Brazil and Canada to fight this opportunistic and highly politicized privatization. Privatization deepens already unequal access to essential life-sustaining services. It leads to the deterioration of services and infrastructure, and to the introduction of new fees as well as increases to existing ones. And it opens the door to more frequent violations of workers’ rights.

The United Nations has recognized access to water and wastewater services as a fundamental human right. UN experts have described how the current pandemic has exposed the “catastrophic impact” of privatization, arguing that privatization “prices out the poor and may result in violations of human rights.”

Cities across the globe that once chose to privatize their publicly owned water companies have since undergone re-municipalization — returning water services back to state ownership and democratic control. So why is this privatization in Brazil happening at precisely the same time as the country experiences its highest rates of infection and death from COVID-19? And why are Canadian Pension Funds buying into such a contentious project while Brazil is experiencing its most intense phase of the global pandemic?

Rio’s water system (known locally as CEDAE) is the largest and most profitable public water company in Brazil, averaging an annual ‘profit’ of $226 million Canadian a year. This ‘profit’ is currently used to subsidize water and sewage services in areas where the cost of providing these services is higher. The potential for profit is so attractive that 12 different companies organized more than 2,000 technical visits to CEDAE facilities during the most dangerous moment at the epicentre of the global pandemic, even as millions of people around the world endured lockdowns to minimize the spread of COVID-19.

Canadian pension funds are interested in this kind of investment because fund managers are structurally obliged to maintain a “fiduciary duty” to Canadians. The Canadian version of neoliberalism meant a restructuring of the Canada Pension Plan in the 1990s that demanded the fund’s Investment Board (CPPIB) prioritize profit over any other variable. Any kind of democratic accountability mechanism was eliminated. 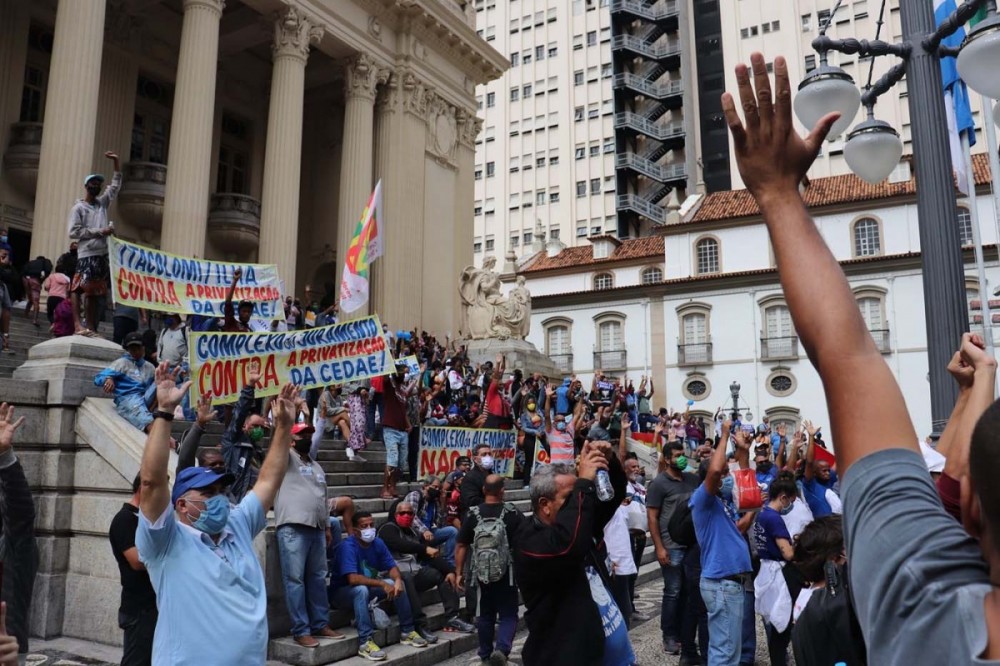 The state legislature voted in a clear majority to suspend the auction but the governor ignored the vote and went ahead with the privatization. PHOTOGRAPH: SINDÁGUA-RJ

Every single step taken in the privatization of CEDAE has been dubious and contested. The auctioning itself has taken years to achieve. These kinds of contentious actions always require some kind of societal “shock” that provides an opportune political moment.

Brazil’s environment minister (who actively defends illegal logging and burning the Amazon rainforest) understands this principle perfectly. He was recorded in a cabinet meeting incentivizing ministers to take advantage of the pandemic and the media’s focus on COVID-19 to pass as many unpopular policies as quickly as possible. The pandemic is being used to reduce public debate, short-circuit participation, and prevent people from mobilizing a resistance.

This privatization has been coordinated by the extreme-right Bolsonaro government and the finance minister, Paulo Guedes — a neoliberal ideologue. The Brazilian federal government took advantage of the fact that Rio’s state debt had reached crisis levels in order to demand that CEDAE be privatized as a condition for financial relief. The usual false and long-ago discredited arguments about the benefits of privatization weren’t even offered in this case.

The Brazilian National Development Bank (BNDES) was given the mandate to guarantee that as many privatizations occurred as quickly as possible during Bolsonaro’s term. Bank directors created a “war room” to ensure that contentious privatizations occurred. When questioned about the possibility that legal or political decisions could postpone the auction, a bank director arrogantly stated, “we don’t work with delays.”

Only the Profitable Parts Being Privatized

But not all of CEDAE is being privatized. Several legal challenges to the auction were initiated prior to and after the auction. On the eve of the auction, the Rio state legislature voted in a clear majority to suspend the privatization. The sitting state governor ignored the vote and issued a unilateral decree in order for the auction to proceed.

Only the parts that are profitable (distribution and sewage treatment) are being handed over. The parts of the service that are most costly (capturing and water treatment) will remain the responsibility of the state, but now without internal horizontal subsidies from other parts of the company.

Even with all the risks that could have interrupted the auction, the climate for investors was one of “euphoria and mobilization,” according to market sources. 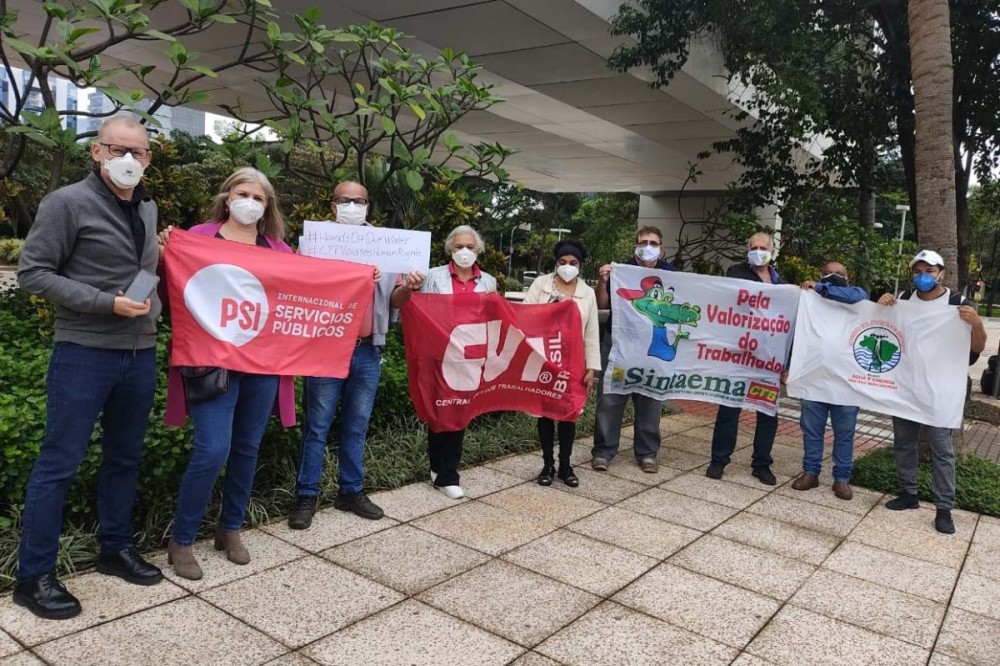 Over 200 organizations signed a letter against the privatization. Here it’s being delivered to the Canada Pension Plan Investment Board (CPPIB) headquarters for Latin America in São Paulo, Brazil. PHOTOGRAPH: EUAN GIBB

Local trade-union and social movements, Public Services International and its affiliates — including the National Federation of Urban Workers (FNU), NUPGE, CUPE and the PSAC — along with social movements and national labour centrals in both Brazil and Canada, all actively opposed the auction. Despite this deep public opposition and the auction’s legality remaining in question, the auction went ahead.

A wide variety of strategies, learned and consolidated over decades of collective resistance to this type of destructive reduction of the commons, were mobilized. The confidence and boldness with which the extreme right is attacking makes it clear that the “rules of the game” have been abandoned.

The rule of law was used as symbolic cover for a policy that was already decided — despite the legal, public and political (legislative) decisions that countered this privatization. Our fight against the expansion of capital — capital that is based on speculation, predation, fraud, and the theft of socially produced wealth — must be expanded and unified. Our strategies must be bolder than those of the extreme right.

We have allies everywhere. Allies that support, participate in and self-organize actions in workplaces, in the streets, the legislatures, the courts and in the media. Only when we organize creatively and boldly in all of these spaces, and when we work together with all of our allies, can we secure and expand quality public services that are democratically managed and accessible to all.