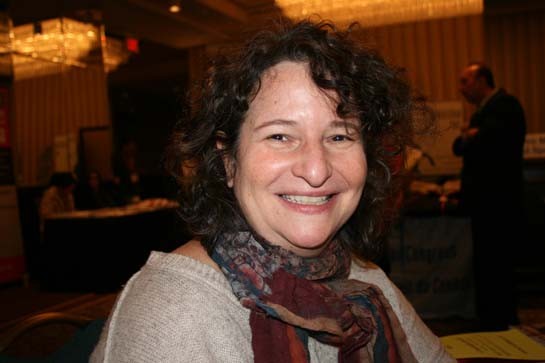 Those words I carry now in memory only.

It breaks my heart to say this, but my friend and Our Times' long-time art director, Dinah Greenberg, has died. Cancer has taken her from us. I keep looking around and wondering where she is. I guess that's what we do after someone we love dies.

For 27 years, Dinah and I worked closely together, beginning at Our Times' printshop at Dufferin and Queen Street, in Toronto. A full-service, unionized, co-op, the shop published Our Times magazine. Dinah arrived at 390 Dufferin Street as an illustrator in search of a cooperative working environment that championed the values of sharing, and caring — her values.

I still remember her showing the interview committee her lovely illustrations, looking across the table at us with her bright, dark eyes. She became the printshop's designer and, within a few years, she took on the role of art director for the magazine itself. Lucky Our Times. She also fell in love with Our Times' camera operator and film-stripper at the time, Joseph Salema. Workplace romances were not encouraged, but the love Dinah and Joe shared lasted a lifetime.

With great dedication, Dinah designed one issue after another of Our Times over the years, working with me in person, and then via email and phone after the print shop closed and I moved to Nova Scotia. Running her own freelance business called Nomad Design, at times she caused me editor nightmares by putting funny little notes right onto the magazine proofs, frighteningly close to presstime — things like, "HEY GIRLY, WE NEED SOMETHING TO FILL THIS SPACE." Those times when I happened to be under the weather I'd receive reassuring emails from Dinah: "Hey gal. Hope you feel better soon. Sending chicken soup hugs."

She was so easy to work with, and such a loving, nurturing person (I'm sure her beloved daughters Rita and Talia would attest to that). She always stayed on the sunny side and thought the best of others (except those evil right-wingers and no-good heartless capitalists). She was strong, stubborn, and full of genuine humility.

On November 16, 2016, Dinah emailed to say the cancer had come back. On December 12, Joseph, her partner and the love of her life, emailed to say Dinah had died. As hard as Dinah tried to stay with us, and as hard as the doctors and nurses and healthcare workers tried to help her do that, in the end no one could fix it.

Because of the persistence and commitment of this talented sister, the Canadian labour movement has an incredible treasure trove of beautifully designed stories by and about workers and their collective struggles for improved working conditions and healthy communities.

But Dinah wouldn't want me to say that. She didn't seek the limelight. She just wanted to do meaningful work that helped, in some small way, to make the world a better place.

Thank you, Dinah, with love from of all of us. We miss you.

This article originally appeared in Winter 2015-16 of Our Times Magazine. Support our work by subscribing, advertising, or donating today!