No Way to Learn 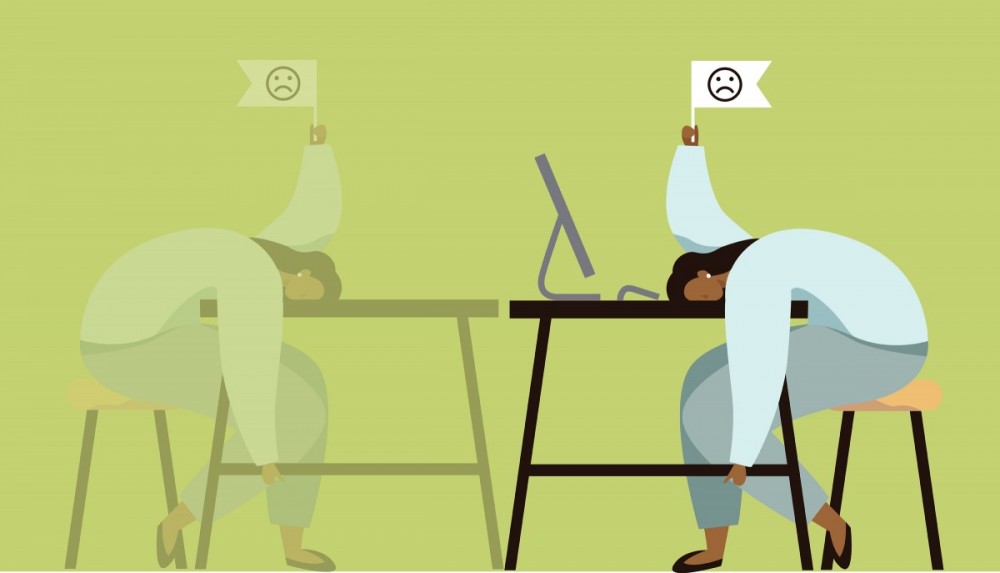 I used to be a good teacher. Not the stand-up-on-your-desk-tear-your-textbook-to-shreds-while-reciting-poetry kind of teacher played by Robin Williams in the 1980s coming-of-age film Dead Poets Society, but the kind who knew her stuff and legitimately cared about her students. The kind whose job filled her up, gave her joy and, during occasional, fleeting moments over a 20-year career, felt like what she did mattered. I don’t feel like that anymore.

This is because I am no longer a high school teacher. I am now a hybrid teacher. I teach two sets of students simultaneously – those who are in the room with me, and those who are learning virtually from home. I fail at teaching both groups. My focus, my attention and my energy are all divided, and everyone who needs something from me is getting less.

The realities of this model are radically different from those of the fully virtual model that entire school boards switched to for a time, earlier in the pandemic. Then, teachers were asked to “pivot” and teach to an entirely online class. Teachers adapted their teaching methods to meet the needs of online learners. What we have now is teachers being asked to teach two completely different classes, which require two completely different teaching styles, simultaneously. It’s like being asked to pilot the plane while also staffing the beverage cart.

When the current school year started, I had on average five to six online students per class. Now I have more than 10 in each period. That’s one third of the students in my classes: one third whom I’ve never met, whose faces I’ve never seen, whose voices I’ve never heard. In my board, students are not required to turn on their cameras or use their microphones. Instead of students, what I see when I look at my virtual classroom are icons, most of whom don’t respond when asked a question. So I have no way of even knowing if a live student is present on the other side of the screen or if I’m teaching to a student-less computer. Best-case scenario, it’s demoralizing. Worst-case scenario, it’s driving teachers out of the profession.

It’s not just my board having trouble finding long-term occasional (LTO) teachers to fill staff absences and leaves. LTOs are specifically citing the hybrid model as the reason they do not want to take supply or short-term jobs. Using technology you may be unfamiliar with, in a classroom and school you’re assuredly unfamiliar with, presents significant challenges. That technology often causes general chaos in the classroom each period, complicating everything from taking attendance to planning activities.

Usually when a teacher takes a leave, the position is filled within days. Now, it’s taking weeks or months. In the meantime, the absent teacher’s classes are staffed by other teachers already working at the school. They’re covering the teacherless class during what are supposed to be their own preparation periods. I helped cover a teacherless class for four weeks, and tried to provide the students with some sense of routine and normalcy during that time. But as a teacher covering a class on my prep, I can’t assign or evaluate work. That meant, for a full month into the semester, these students had no real feedback, assessment or evaluation. They came into class every day wondering who would be standing in front of them, and if that person was even qualified to teach that subject. That’s the ripple effect of the hybrid model.

I’ve been asked what makes hybrid teaching so difficult. Am I not just doing the same job I’ve always done, but with a webcam running in the background? No, I’m not. Now I have to deliver a lesson that engages and informs the real-life people in front of me, as well as those students who are only watching the lesson on a screen. Rarely do these two teaching methods sync up. I’ve invested in extra technology for the classroom: a longer VGA cable, a USB hub and a microphone. (In all the years I’ve been teaching, I’ve never once heard a provincial government acknowledge just how much of their salary individual teachers use to purchase classroom resources. It’s our paycheques propping up the education system and allowing schools to function.)

I spend the first part of every class hooking up my laptop to the projector, plugging in speakers and presentation remotes. This is in addition to the extra preparation I did before the class started: photocopying handouts for in-person students and posting them online for virtual students. The hybrid system has easily doubled the average teacher’s workload.

One of the greatest losses in the hybrid classroom is the sense of community, for both the students and the teacher. The two groups of students exist in separate realms, and it’s difficult to get them to interact. It’s also difficult to engage with virtual learners in meaningful ways. When all students attended in person, I’d use the five minutes between classes to greet the students and talk to them about their lives. Who has a driver’s test coming up? Which student basketball players have a game today? These little conversations are gone, swallowed up by the technological demands of the hybrid classroom.

Teachers are burning out as they try to meaningfully reach two radically different groups of students every day. I’ve seen numerous experienced teachers switch to part time or go on medical leave due to the current strain of the job. And with no LTOs to replace them, the situation is only getting worse. Those who remain on the job are getting increasingly frustrated with a provincial government and school boards who have doubled teachers’ workloads while paying lip service to “staff wellness.” It’s not unusual to return from class to find a colleague in tears, overwhelmed by stress and exhaustion. We feel abandoned by everyone: the administration, trustees and the Ministry of Education. Weekly school board emails reminding us to “take care” of ourselves (“helpful suggestion: take a long walk!”) don’t make it any easier to teach two lessons at the same time. In fact, such tokenism actually makes daily life in the classroom harder, because it reminds educators how (deliberately?) out of touch school boards and the Ministry really are.

Every student who failed one of my first-semester classes was a virtual student. Though I repeatedly invited these students to work online with me one-on-one, many refused to meet. The result, unfortunately, was that they failed to earn the credit. It’s tragic that it’s come to this, but the failure rate of virtual students may be the wake-up call the boards and Ministry need, to recognize the hybrid model isn’t working. Staff absenteeism and burnout didn’t do it. Complaints lodged by parents didn’t do it. Negative feedback from students didn’t do it.

In the meantime, I’ll continue to prep for my double classes, and I’ll keep emailing my unresponsive virtual students. And I’ll remind myself that it hasn’t always been like this, so maybe this too shall pass. But until it does, I’ll keep checking in, not just with my students, but with my colleagues as well. We’ve given up on trying to inspire students to stand on their desks and recite poetry. These days, we’d be happy just to hear their voices.

*Jane Keating is a pseudonym. Keating is an educator and rabble-rouser who has taught secondary school for 20 years. She lives in the Toronto area.