Moving Forward “In a Good Way” 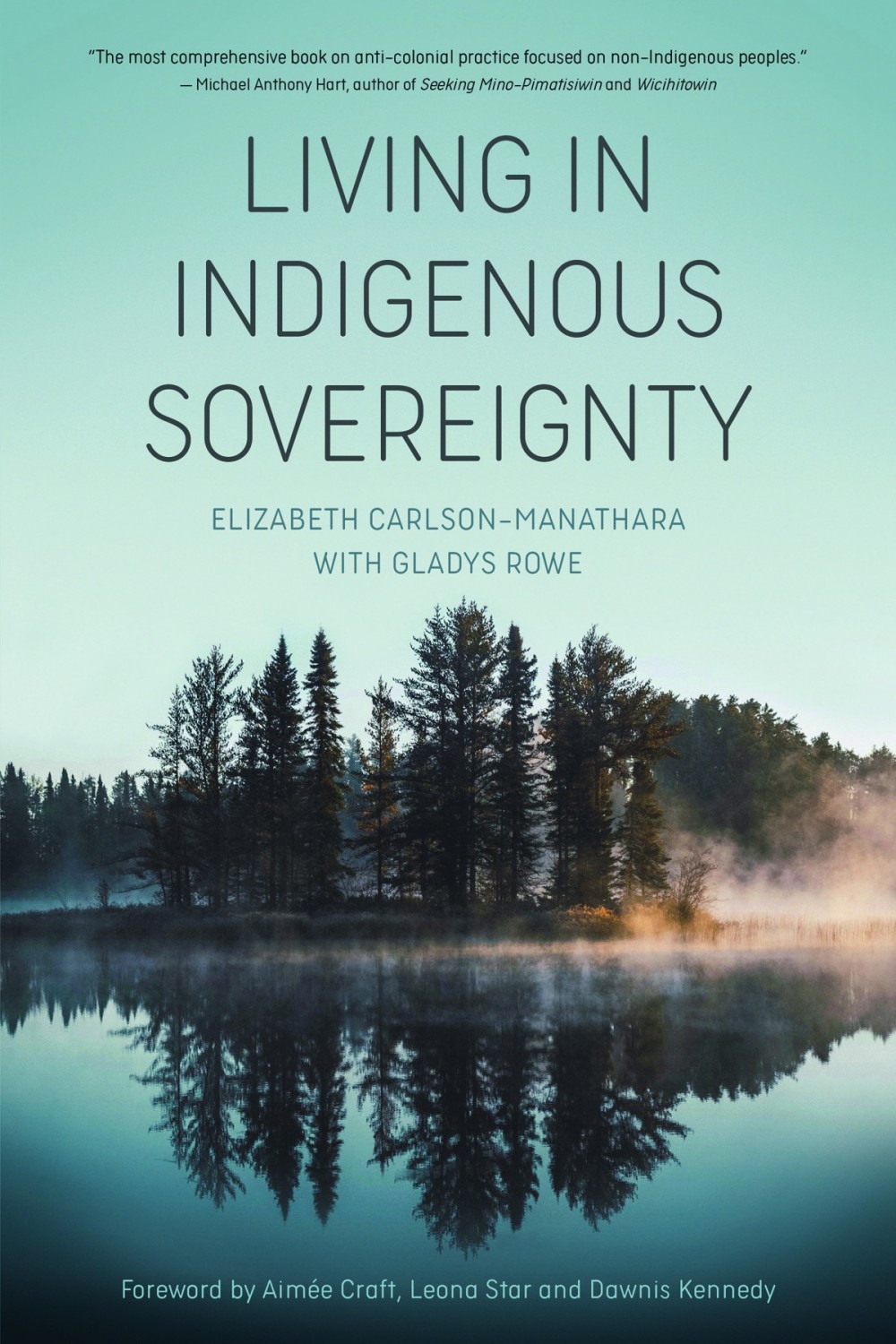 Living in Indigenous Sovereignty is a rare treat — a scholarly but very readable labour of love.

Carlson-Manathara shares with the reader that her “Swedish, Sámi, German, Scots-Irish and English ancestors settled on lands of the Anishinaabe and Omaha Nations, which were unethically obtained by the US government,” and that her scholarship is focused, among other things, on “the anti-colonial and decolonial work of settlers.” The interviews she conducted for her PhD dissertation are the springboard for this book, and her research was married with traditional ceremonial work to ensure it was undertaken with respect for all concerned, and that the publication of that research went forward “in a good way.”

The reader is immediately brought into a web of trusting relationships, and made cognizant of the care and respect Carlson-Manathara takes to describe what Gladys Rowe and she are doing. That care begins with the acknowledgment of the Anishinaabe, Muskeko-Ininiwak, Dakota, Nakota and Red River Métis Peoples on whose land (Treaty 1 Territory) she wrote her dissertation. It carries through to her mention of the Anishinaabe People of the Robinson Huron Treaty of 1850, where Living in Indigenous Sovereignty was finished, and on to the acknowledgment of her debt to the Indigenous scholars whose influential works have shaped much of her own thinking. Taken as a whole, Carlson-Manathara’s beautifully written acknowledgments are one of the most compelling aspects of the book, and they are just one example of her “attentiveness to being a good relative.”

Her acknowledgments powerfully set the context for the stories of 14 white settler Canadians, each one of whom speaks about “being called to action” to acknowledge and address the traumatic impacts their own people, through settler colonialism, have had on Indigenous Nations and their lands.

Their collective commitment to engage authentically in relationship-building weaves its way through every narrative. Each interviewee tells a compelling story about the way they arrived at the truth about themselves and their families. This white settler reader heard the echoes and felt the resonances with my own, and so many other people’s, experiences of growing up immersed in a totally normalized racism — one that is passed from generation to generation.

Despite growing up unconscious of the privilege of being white and therefore unaware of entrenched systems of racial domination, each of these 14 settlers felt a profound dissonance at witnessing violent behaviour unleashed upon vulnerable people. Many were compelled to act because they knew, in their hearts, something was wrong. For example, Susanne McCrea McGovern, an artist and environmentalist, remembered dating an Indigenous boy in Grade 8 who had been in 14 foster homes. She says, “I just remember being so heartbroken for that boy.” We are allowed to see what they saw and feel what they felt at the very time their activism took hold.

So much of this book is inspirational. After reading the chapter about Steve Heinrichs, a settler working for Mennonite Church Canada, and one who equates God to “a mama bear who sticks up for the [Indigenous] children that are getting hurt,” I needed to set the book down and give myself time to reflect on my own emotional response to his commitment “to living in equity and radical respect.”

The stories do not turn away from the hard parts — the challenges many of the interviewees have faced as activists. Sometimes, in trying to do the right thing in support of Indigenous resistances, these activists had to distance themselves from their own families and communities because their new-found knowledge pulled them in directions others would not support.

Then there are the honest conversations about settler activists’ own inherited white value systems all too often coming into conflict with Indigenous ways of doing things. Many discuss the mistakes they’ve made while trying to build relationships. For example, not long after Monique Woroniak (a settler from Winnipeg — Treaty 1 Territory and homeland of the Métis Nation) began her activism, she realized that she had to put her propensity to “take the lead” on the back burner. In settler culture, an inclination to take the lead is often seen as a huge asset, and the desire to manage is valued. But within the Indigenous context of inner-city Winnipeg, Woroniak had to learn to get her need to manage things under control, and instead ask questions and take direction.

Some interviewees, like Victoria Freeman, a historian and educator, speak to how to difficult it can be to navigate cultural norms when working together. Dave Bleakney, a labour activist and member of the Canadian Union of Postal Workers, one of Canada’s most militant trade unions, talks about the enormous learning curve settlers encounter (stemming from the profound ignorance that white people have about anything Indigenous) when they try to exercise their responsibilities. He speaks of how little we know. “Typically, in this place called Canada,” he says, “I often have not a clue where I truly am and what history I pass over.” Joy Eidse, who comes from a Pentecostal Christian background, had to recognize her own paternalism and learn that holding assumptions about what is helpful can be very harmful. She had to gain the understanding that “walking with the community and supporting in ways that are invited, while focusing on herself and her own decolonization process, is safer.” Murray Angus, a plain-speaking, no-nonsense educator who co-founded an Ottawa-based college program supporting Inuit youth, doesn’t mince his words. “If you want to be in a relationship that rights the balance, just shut up for a while.”

So many of the narratives encourage us to find meaning in relational practices. For example, after presenting the stories of the first four settlers, Carlson-Manathara takes the opportunity to talk about how settlers can orient themselves “toward Indigenous sovereignty,” where the first and possibly most important thing to do is find a new way to personally relate to the land. We find this assertion buttressed when Rick Wallace, a settler who holds a PhD in peace studies, tells us that “Treaty isn’t just a partnership between First Nations and settlers. There’s a third party which is actually the land itself and the spirits of the land.”

Carlson-Manathara communicates what she has learned from her Indigenous mentors and colleagues and offers that information to the reader, inviting them to take note if they truly want to decolonize and live in Indigenous sovereignty. She quotes Niigaanwewidam Sinclair, an Anishinaabe professor and commentator, who says, “Treaties are about trying to figure each other out for the rest of our lives. Forever.”

Carlson-Manathara took Indigenous scholars at their word when they requested that this book be written and the call to action be taken seriously. The theme running through all the stories is settlers taking responsibility for their own people’s (un)learning, then doing something with that learning in ways that trouble and challenge colonial norms. We must take up the calls to action, and do so outside colonial constructs. We must do this within the parameters and protocols that are already being practised within Indigenous Peoples’ lands and territories, as their laws and governance structures dictate.

As the book reminds us, settlers cannot wait for our leaders to show us, or to “manage,” the way out of the mess we’ve made. Interviewee Murray Angus says it succinctly: “It’s relationship, not management.”

This book couldn’t have come to us at a better time. It is a gift for all settlers in Canada who are walking the decolonization road.

Sylvia Smith is an activist and educator living on unceded Algonquin Territory with her partner, two children and grandson. She is the founder of Project of Heart and Justice for Indigenous Women.