Letter From A Letter Carrier

The Way I See It 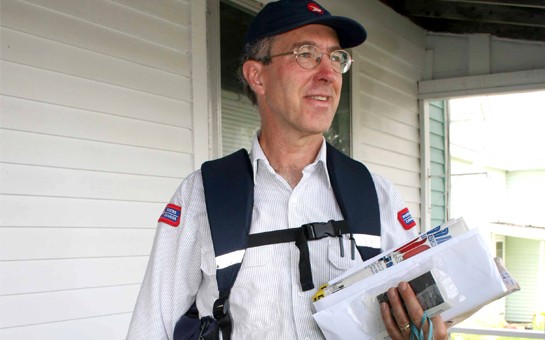 Last summer I retired after carrying mail for 29 years. I had worked in eight different cities and towns from coast to coast and delivered mail to tens of thousands of houses, apartments and businesses. As I write this, postal workers are on rotating strikes (and just now locked out by management) and the resolution of this situation is uncertain.

The reactions to this strike were not unexpected. On June 3, The Globe and Mail's underpaid editorial writers repeated Canada Post's claim (disputed by the Canadian Union of Postal Workers) that letter mail was down 17 per cent, and speculated that strikers were sealing their own fate. The corporation said that postal workers were out of touch for expecting $26 an hour and that the cost of their demands would exceed a billion dollars. Assorted internet commentators piled on: workers should be grateful for what they've got; if you don't like it, get another job; and, who needs the mail anyway? The response I never understand is the person who tells me how crappy their job is and is outraged that mine is better; strangely, this person never seems to grasp that improving crappy jobs is a better strategy than dumping on those who have a better, unionized, one.

THE REAL QUESTION IS - WHAT LED TO THE STRIKE?
Wages are what get most peoples' attention, but the real question is what led to the overwhelming strike mandate (94 per cent) and the first strike since 1997. In an uncertain economy postal workers are so riled up that they are risking a substantial loss of pay and the ire of their opponents for - what exactly? They have accepted modest wage increases in the past, so why not now. What exactly is driving this strike that the media have been unable, or unwilling, to uncover, and what does the corporation hope that it can keep out of the debate?

One of the most contentious issues is sick leave. Postal workers can accumulate the 15 days they earn each year. I retired with more than 300 unused sick days because I didn't need them when I was working. But, as a person ages and sees others with long-term injuries or illnesses, the security and reassurance of having those days is great. Canada Post thinks this plan encourages people to take time off and points to high absenteeism as a problem. They want to replace it with a short-term disability plan. This will mean fewer benefits and more people coming to work sick and injured. The assumption is that people take advantage of a generous system, not that it simply enables people who are sick to take time off. And then there's that person again, who argues that if others don't have this benefit, you shouldn't, rather than thinking that everyone should have adequate income protection.

NEW METHODS INEFFICIENT
The "Modern Post" (cue the fireworks), the name Canada Post gives its grand plan for transformation, covers a multitude of sins. It includes a massive investment in new processing plants, sorting technology, and work-pattern restructuring. And, of course, it's been planned by people who have probably never handled a piece of mail or asked for the input of people who do. It's also engendered more anger than I have ever seen in postal workers.

Very expensive automated sorting machines have been purchased to sort mail in the exact order of delivery for a particular letter carrier walk. The system works great if the address and postal code are completely correct. What happens, though, is that carriers end up with two bundles of mail (plus flyers) to deliver at the same time: one that's presorted and one that they've prepared themselves. And don't you dare try to make it easier by merging the two.

It's not that the new methods are impossible; they're just slower, inefficient, counter-intuitive, unsafe, and far from user-friendly. The ham-handed, rigid implementation of this process, and the notable lack of consultation and flexibility, have resulted in slower service and infuriated carriers.

BIZARRE MANAGEMENT PROGRAMS
Probably the most bizarre, counter-productive, and inexplicable management program that I've seen in my three decades has been the institution of forced overtime. The mail for each letter carrier's assigned route (or "walk") has to be delivered each day. Relief carriers cover all absences. If there are not enough replacements to cover the regular letter carriers' walks, there are a number of ways to get the mail out. The first is to extend the hours of part-time carriers, and then to offer voluntary overtime to regular carriers. If there are still uncovered walks, the contract stipulates two procedures. Up until about three years ago the next step was to call in a casual employee from a temporary list. Most of them were suitably trained and could come in right away. They were also paid less and worked at straight time. The other contract possibility was to force regular carriers by reverse seniority - the most junior being ordered to take part of another route.

I worked at Canada Post for 27 years before I saw forced overtime. Without any explanation, other than that they were following orders from above, supervisors stopped calling in casuals and began ordering forced overtime. This meant paying time-and-a-half and having the mail delivered late (after your own route). Makes sense, right? It also had the advantage of demoralizing workers, who now had no idea when they would finish work on any given day. It also showed them that the corporation was quite happy to abandon common sense and efficiency if it meant creating a tense and unhappy workplace. In smaller centres with any unstaffed positions, this was particularly problematic. A carrier I spoke to this past spring was forced out on overtime every day for three months last winter. We were given clip-on lights so that we could read addresses while delivering after dark. This is "safe practice"? This will reduce accidents? As far as I know, there has been no substantive intelligent explanation for this change, and no other policy I've experienced seems to have been so deliberately designed to punish carriers and make sure workers are aware of the power of management to control the workplace.

POLICIES NOT GOOD FOR CUSTOMER SERVICE
A number of other recent policies seem to fly in the face of logic and good customer relations. You may have started to get addressed admail delivered to you that has someone else's name on it. It's deeply ingrained in letter carriers that they only deliver the correct mail to an address. Yes, I know there were miss-deliveries in the past, but now they're intentional. Unless there is a change-of-address in effect, addressed admail must be delivered, even if the carrier knows the person is long gone, and even if the current resident objects. Yes, it makes the letter carrier look inept and obtuse, but the corporation can now assure the admail sender that a higher proportion of their mailing is being delivered. This means more response to the ads, right? Of course, it assumes that the customer, who probably throws out most of the admail addressed to her, will happily open admail addressed to someone else. In other words, the success of this policy rests on someone taking something that doesn't belong to them.

Canada Post has been profitable for 15 years. It pays substantial corporate taxes and an optional dividend to the government. Far from being a drain on taxpayers, it subsidizes them. It also pays a Corporate Team Incentive or bonus to all employees based on its profit. And it invests hundreds of millions of dollars in new technology and infrastructure. So why does it cry poor when it comes to paying for proper staffing and wages?

DELIBERATE ESCALATING OF TENSION
The financial doubletalk, the oddball policies, the deliberate escalating of tensions in the workplace, and the unwarranted attempts in this negotiation to gut the contract are some of the reasons for postal workers' anger, and which have led to a strike. In the last few years the disconnect between senior management and the traditional sense of the Post Office as a universal service has become complete. Customers, apart from the profitable high-volume mailers, are an irritant and the workers who keep it going are the real obstacle to greater profitability. As well as anger, there is a real sadness that the work we did so well for so long is no longer valued.

Bruce Sparks is a retired postal worker living in New Glasgow, Nova Scotia, and a member of the Canadian Union of Postal Workers.