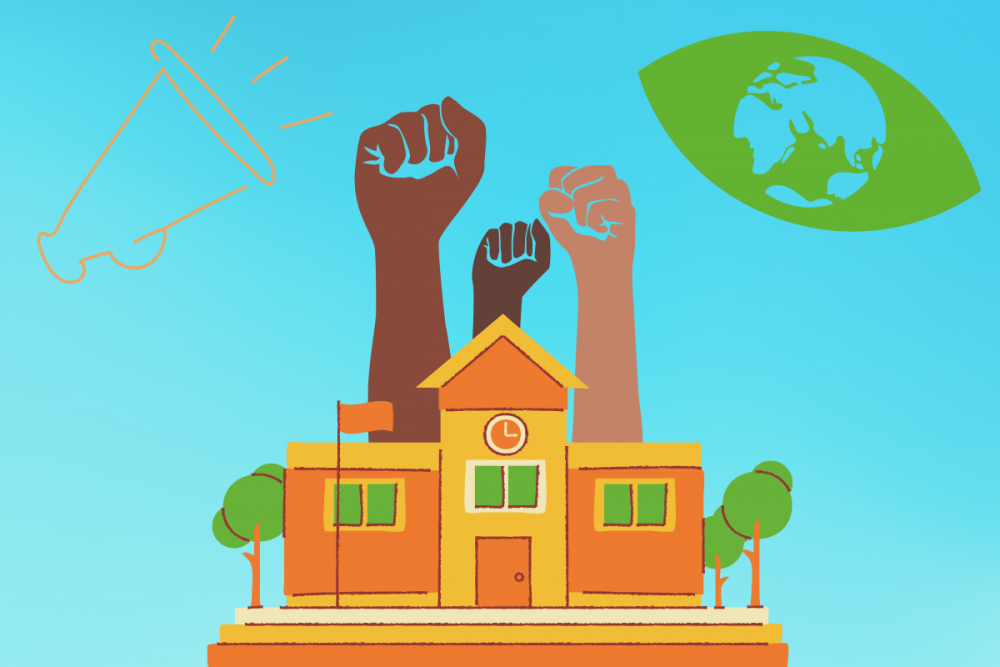 The United Teachers of Los Angeles (UTLA) made history in 2019 when it went on strike for the first time in 30 years. New leadership in the union had organized members behind bold demands that culminated in a powerful six-day strike, one that secured massive improvements — and inspired subsequent teacher strikes in other states. One of those demands was for the creation of new and expanded green spaces at schools, a victory Jane McAlevey heralded as an example of what unions can do to fight for a Green New Deal.

Now, UTLA has released its Beyond Recovery platform, a campaign that lays out its vision for the city’s public education system and one that will guide its negotiations strategy, which prioritizes both the climate and the common good.

UTLA represents 35,000 school teachers, librarians, counsellors, nurses and other support workers across Los Angeles — the second largest school district in the United States. The union’s contract expired at the end of June.

UTLA has smartly recognized a moment and is trying to seize it: state and federal responses to COVID-19 increased the school system’s budget by $5.4 billion for the 2021-2022 school year, with a projected unrestricted reserve of $2 billion. Teachers are using this moment to demand long-term structural changes that will make public education more equitable, improve learning outcomes, and create healthier communities. They’re also using it to take strong climate action. In February, UTLA’s members voted 96 per cent in favour of adopting the platform ands its bargaining priorities.

The Beyond Recovery platform contains some of the most inspiring priorities I have ever seen in labour negotiations. It outlines how L.A.’s public school system can recover from the pandemic while overcoming chronic underfunding and equity issues. Each pillar of the platform contains a number of priorities for bargaining. On top of traditional bargaining issues like smaller class sizes, increased hiring, and higher salaries for all educators, nurses, and support workers, UTLA and its allies have some expansive and innovative demands. These include the hiring of more counsellors, psychologists, and maintenance staff, as well as more art, music, dance, and physical education teachers. Expanded language programs, greater teacher input into curriculum development, and investment in the recruitment and retention of racialized teachers will also be on the bargaining table, as will investment in support programs for at-risk students and their families. Some of the most visionary priorities call for the school board to convert its vacant properties into low-income housing, and to provide free WiFi for all students and their families where possible (and where not possible, to advocate for the state to provide it).

The pillar titled Healthy, Green Public Schools is particularly visionary. It offers a guide to those unions who are wondering how climate change relates to their work and how they can bring climate issues into contract negotiations. Noting that the L.A. school board owns and operates 6,400 acres of property, this part of the plan calls for climate-adaptation and mitigation measures to be implemented across all buildings and properties. In particular, it calls for the installation of solar panels on buildings and the expansion of green spaces. It envisions using school lands to collect clean water (important for drought-prone L.A.), community gardens to feed students and their families, and new cooling zones at schools to contend with increasing heat waves in the region. More trees will be planted and school buses will be electric. On top of all that, it demands an audit of the school board’s green practices, including its energy and water usage, carbon emissions and air quality.

One of the most impressive and powerful aspects of the platform is its development. Its goals and priorities are the product of extensive meetings with and input from members and allies. UTLA held close to 600 meetings with members, special category and thematic meetings, and three regional community meetings for students, parents and other community members. That level of engagement goes far beyond consultation or the last-minute requests for solidarity that usually accompany job action. By building relationships well ahead of time and inviting input into its bargaining strategy, UTLA is cultivating deep connections and solidarity between its members, students, parents and community allies. Those connections benefited the union during its last strike, and are becoming increasingly important to public-sector workers facing austerity and government interference in collective bargaining.

The union’s bargaining team has taken those priorities and turned them into bargaining proposals as they begin negotiations. Over the next months we’ll see which clauses they put forward and which of those the union will be able to bargain into its collective agreement. Success, of course, will depend on the organized strength of teachers and their supporters — and on whether or not the school board is willing to risk a repeat of 2019. It will be an educational round of bargaining for all trade unionists to watch and to learn from.