LESSONS FROM AN EPIC SNOWSTORM 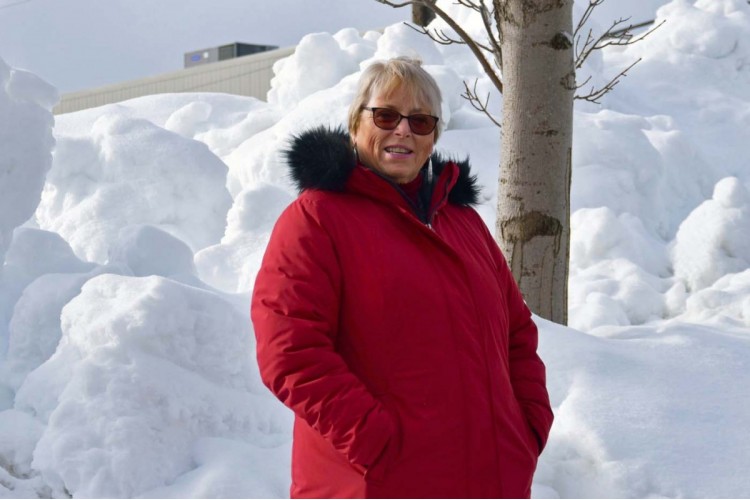 When you live smack-dab in the middle of the North Atlantic Ocean, you learn to expect unique weather challenges. Indeed, Newfoundland and Labrador’s history is filled with tales of shipwrecks and multiple lives lost at sea due to gale-force winds and other wintry elements. Recall, in 1982, the Ocean Ranger disaster where 84 crew members perished. Remember, too, the Titanic was not able to survive our famous icebergs.

Friday, January 17, 2020 was exceptional, as it marked the single most intense storm ever recorded in the province. Upwards of 90 centimetres of snow was dumped on Eastern Newfoundland, accompanied by winds gusting, at times, to 160 kilometres an hour. A state of emergency (SOE) was declared by the Mayor of St. John’s, the first in over 35 years. It essentially shut everything down. Neighbouring communities followed suit, and life as we knew it was transformed for eight days. The silence was deafening at first — no planes, no ferries, no traffic — and then the cleanup started. 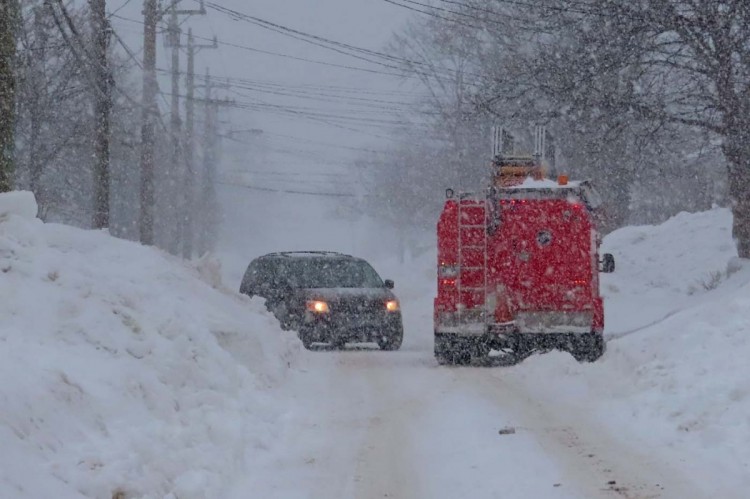 The only ones allowed on the roads were snow-clearing personnel, emergency vehicles, first-responders and, eventually, the several hundred members of the armed forces who came to help those most vulnerable and in need of digging out.

I was away in Ottawa when all this happened, but how I wished I had been there.  Not because I wanted to shovel the six-foot snow drifts across my street, but because I knew something very special was happening that I would have liked to experience with my family, friends and neighbours. Something special, and yet, something commonplace where I come from. Stuck on the mainland, I paid close attention to the reports from so many back home who had so much to say.

I’m president of the Newfoundland and Labrador Federation of Labour (NLFL), and whenever I have the privilege of greeting folks from out of province attending labour events, I like to say how proud I am of our workers and our movement in NL. I explain that it’s part of our very fibre to look after each other in the face of adversity. It’s like we possess an inherent commitment and ability to stand up and fight for those who cannot do so for themselves. The people’s response to this storm was true to form.

Social media was ablaze with stories of people helping each other throughout the state of emergency. The newborn Levi Jacob Snow, delivered after his parents drove to the hospital on a snowmobile, came home to dozens of people clearing a path to the family’s front door. NL comedian Mark Critch very poignantly noted in his “Ode to the Newfoundland Storm” that when baby Snow learns the story of his birth and the people who helped, he will know everything he needs to know about the place where he’s from. 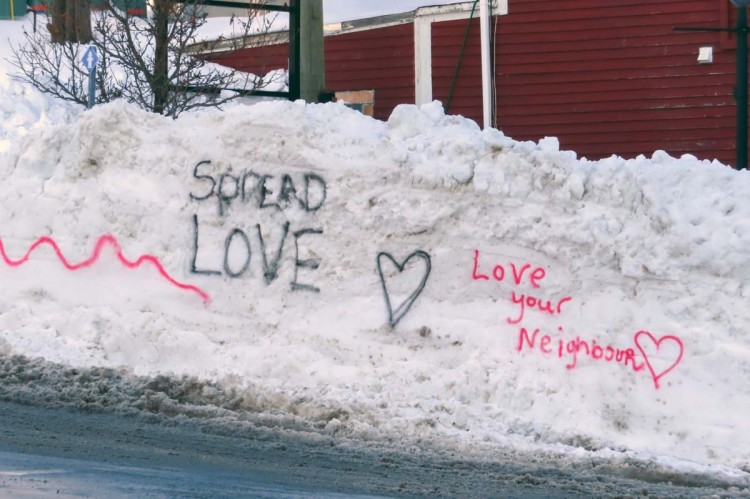 People came together, despite everything, to look after each other, a reminder of how in the face of trouble, we really are a resilient, caring and fun-loving people. A local chef used her home as a “walk through” and served hot meals from her window to anyone who wanted one. People made it through the storm — including first responders and snow plough operators — to deliver meals to seniors and those who could not leave their homes.

The streets were full of shovel brigades, with neighbours laughing together, sharing food and drink, trading turkey dinners for cigarettes or beer, having campfires in the streets; making the most of a bad situation.

When one reporter asked a local cabbie why people were doing these things, he shrugged and simply stated “Why wouldn’t we?” Many would have had the exact same response.

Spray-painted in the massive snow banks were messages like “spread the love” and “be kind always.” A sign outside a local church read: “Whoever is praying for snow, please stop ”

What About the Low-Waged Workers?

But there was something that seemed to have been overlooked. As the state of emergency dragged on, and we learned that not all workers would be compensated for missed days at work, what became evident was the very real poverty that exists in our province. Many low-waged and contract workers in precarious jobs, who were not being paid, began to talk about their desperate fear of not being able to pay their bills or feed their families.

Some employers publicly stated that they would pay their employees. But others said they could not. There were no policies or laws in place to protect these workers.

As Pam Frampton reported in The Telegram, “After Friday, people with less, suffered more.” She added that it was becoming clear “there are many people in our community who are one bad storm away from personal crisis, and we need to do more as a society to help.”

She was absolutely right. This snowstorm had revealed the real crisis of a society that hasn’t really looked after all of its own, after all. 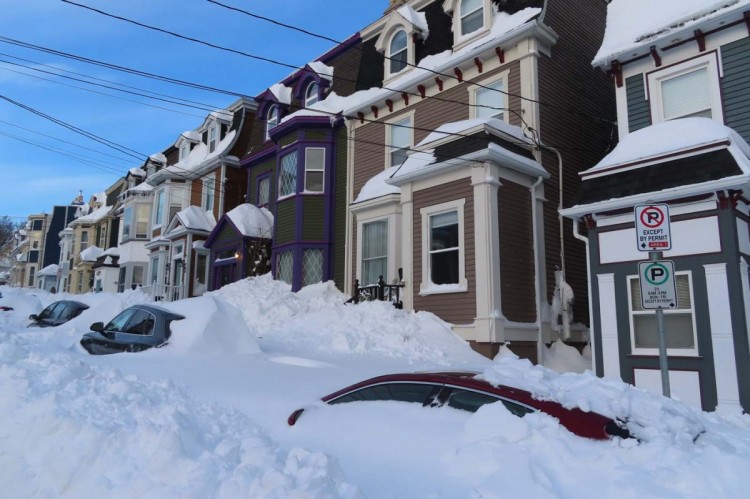 The provincial government reported that they would step in and support workers and businesses. At the time of my writing this, they had not yet detailed what they would do. One thing is clear: workers, and especially low-waged workers, need immediate support. Those who live with mental health and addictions issues also need special attention and care in extraordinary conditions like these.

Ironically, January 17th, the day of the storm, was also the deadline for the province’s Minimum Wage Review Committee to report to government. NL has the second-lowest minimum wage in Canada, at $11.40 an hour. Seventy-thousand workers in NL earn less than $15 — a third of the workforce.

Unions, and civil society organizations like Common Front NL have been active in a local campaign to push for labour law reform — including a $15 minimum wage, for some time.

Employers’ organizations have been vehemently pushing back against any minimum wage increase, suggesting, instead, a lower rate for workers who serve alcohol and receive tips, or who are inexperienced. These same organizations are now asking government to reimburse businesses for lost revenues. At the same time, they have been urging the provincial government to drastically cut public sector spending, and privatize public services to address the province’s debt.

Well, if there was ever a time in this province to reinforce the need for quality public services, and to recognize the passion and commitment of workers in the public sector, then this was it.

Public sector workers at all levels endured the snow and the wind and worked tirelessly to provide the important and essential services that people needed; often putting their own health and safety at risk.

Home care workers stayed with their clients as family members couldn’t get home. One city councillor and new mom offered other parents with infants her own frozen breast milk, and collected and brought food to the local food bank.

They Snowshoed, Skied and Walked for Miles

Hospital staff worked 40-hour shifts. Doctors picked up their patients at home to bring them to their appointments. First responders and emergency workers snowshoed, skied, and walked many miles to relieve their co-workers. The reports were endless. The care and compassion provided by public sector workers was heroic.

In the aftermath of #snowmageddon2020, so many things became obvious to me.

With more erratic weather events in our country and all over the world, we cannot think that this won’t happen again. Clearly, we need to do more to move to a green economy.

Have we learned how important it is to keep looking after each other, and especially the most vulnerable, in a real and political sense?

I was reminded over and over again that our economy and our society cannot function without workers. We need to ensure they are fairly compensated, and protected. I was also reminded that government investment in quality public services, and public sector workers, is critical to how our society and our economy work.

We must never stop our collective work to challenge and influence governments to make the necessary legislative changes to protect workers and their wages when catastrophes like this happen. All workers deserve a living wage. We need strong commitments to, and investments in, public services, our communities and our environment.

When you live smack-dab in the middle of the North Atlantic Ocean, you learn to respect Mother Nature, and to count on your friends, neighbours and co-workers. As author Arundhati Roy says: “Remember this: We be many and they be few. They need us more than we need them. Another world is not only possible, she is on her way. On a quiet day, I can hear her breathing.”

Mary Shortall is president of the Newfoundland and Labrador Federation of Labour.