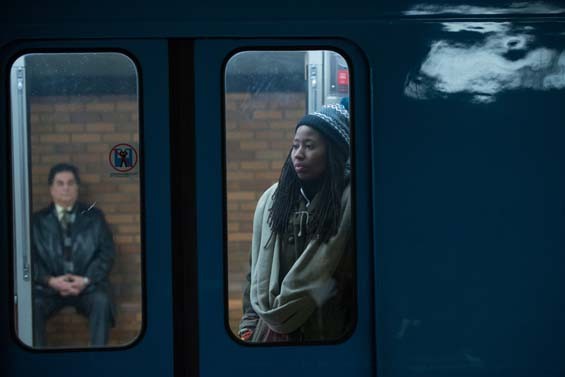 THE NINTH FLOOR
Written and Directed by Mina Shum
Produced by Selwyn Jacob
National Film Board of Canada, 2015

In 1968, a group of six Black students filed a complaint against Perry Anderson, a professor at Sir George Williams University. The students charged that the biology professor routinely treated and marked them more harshly than he did the white students.

Rodney John, one of the complainants, explains in a new documentary, "It wasn't as if I was a failing student. None of us were failing students. We just hit the brick wall of failure when it came to Perry Anderson's class."

A committee was struck by the university to investigate the accusations. As Clarence Bayne, one of the two Black professors who sat on the initial committee, explains in the film, they were given no clear guidelines, though, and the committee seemed doomed to fail from the outset.

When both Black members of the committee resigned and the complaint went nowhere, 400 student activists, Black and white, responded by occupying the computer building on campus for almost two weeks, eventually barricading themselves in when it became clear the university had no intention of meeting their demands for a fair hearing.

From Selma to Eyes on the Prize, narrative films and documentaries have explored the U.S. civil rights movement of the 1960s. But the Sir George Williams University affair took place in Montreal. And most Canadians have never heard of it.

In answer, Mina Shum presents us with her ground-breaking documentary film Ninth Floor, laying bare a piece of history that was profoundly important to the struggle for civil rights and the anti-racism movement in Canada but that rarely makes it into history classes.

On February 11, 1969, riot police stormed into the computer building. During the ensuing confrontation chaos erupted: a fire broke out, equipment was destroyed, windows were smashed, and debris showered the ground below.

A group of onlookers had gathered outside, some who supported the protestors; others who began chanting racial slurs, demanding they be left inside to burn. The student occupation came to an end that day, but many of those involved suffered tremendously, their lives irrevocably changed.

Shum's film is not only ground breaking in terms of exploring under-represented content in Canada, it is also cinematically innovative.

She allows the staging to echo the content: in some scenes the camera seems hidden, as if spying on the interviewees as they walk through the streets, wait for the subway, and carry out ordinary activities.

Some of the interviews are presented in grainy black and white on a small screen, as though shot with a surveillance camera. Many of the students felt they were seen as outsiders, to be watched with suspicion, and Shum's careful arrangement of shots underscores this theme of isolation.

Yet, the film also presents intimate and respectful interviews. The interviewees open up about the deep pain of living, and fighting for their rights, in a white supremacist society.

Shum features striking images of the interviewees, their faces set against a black background, their eyes staring unflinchingly into the camera.

Particularly moving is the interview with Nantali Indongo, the daughter of protestor Kennedy Frederick. Frederick fled Canada after the incident: many feared he would be executed if he stayed.

Indongo speaks frankly about the toll the incident — and the police and courts' responses to it — took on her father.

She says, "I didn't really grow up with my Dad because of how his life panned out after that incident." This legacy, she explains, was valuable but also deeply painful. "I grew up with this image of this amazing militant activist type who was really smart and courageous. But sometimes I really feel like my parents' story is really stuck on my back."

Shum takes great pains to contextualize the chain of events that led to the occupation of the computer building.

She details the conflicting currents in 1960s Canada by juxtaposing the welcoming and accepting atmosphere of Montreal's Expo 67 against the much harsher realities of Canadian society at the time.

Anne Cools, a participant in the protests who later became Canada's first Black woman senator, notes, "There was a great promise of diversity." However, as Rodney John explains in the film, "for those people who might have conflated Expo 67 with the Canadian experience, well, that would have been an error of judgement."

From encountering landlords who refused to rent to them, to dealing with endless barriers to employment, to enduring the suspicious looks of passersby, people of colour in 1960s Canada faced relentless discrimination.

Another one of the six complainants, Bukka Rennie, concludes, "It occurred to me that Canadians are racist, but they like to apologize for being racist."

Shum illustrates this cold and unwelcoming Canada by showing the interviewees wandering, in the dead of winter, amid the concrete brutalist architecture of Concordia University, (which was formed when Loyola College merged with Sir George Williams University).

In the coverage of the incident itself, Shum sets up parallels with contemporary human rights issues. She hones in on the role fear played in steering the actions of administrators and police.

Robert Hubsher, a protestor, remembers seeing one terrified police officer and says, "I have no idea what they had been told about us. But based on the look on that man's face I truly believe they thought we were armed to the teeth and we were going to come out shooting."

There was fear on the other side, too. Many of the protestors explain in the film that they were afraid for their lives, especially when the fire was set inside the building.

Anne Cools explains how these actions and the racist chants of the crowd outside were incredibly traumatic: "That shook me to my core, of course. That meant that there are people around who don't mind seeing other people perish."

When the dust had settled on the incident, race relations in Canada and elsewhere were changed forever. It was the largest student uprising related to human rights that the country had ever seen, and it reverberated through the lives of everyone involved.

Many protestors faced harsh penalties: demonstrator Rosie Douglas, who later became the President of Dominica, was incarcerated for 18 months and eventually deported; Kennedy Frederick fled, and faced life-long mental health challenges as a result of the affair; and many of the protestors, like Anne Cools, Rodney John, and Lynne Murray, had their faith in a just society profoundly shaken.

The incident led to the founding of the Ombudsman's office to handle students' human rights complaints, institutional racism was discussed more freely, and news of the event even inspired people in countries like Trinidad (where many of the complainants were from) to begin their own struggle for justice.

But why does this event seem to be missing from our history?

Mina Shum's film will hopefully bring the Sir George Williams affair back into Canadian classrooms and conversations. In linking the present to the past, Ninth Floor is an invaluable document in the ongoing struggle against systemic racism and its deeply entrenched brutality.

In a world where white police officers' fear is seen as a justifiable reason for killing unarmed Black people, where racial profiling and carding continue, and where a million different violences are perpetrated against Black men and women, young and old, in their everyday lives, this is a film we need to talk about.

Rachel E. Beattie is a member of United Steelworkers Local 1998 who works in an audio-visual archive. She is Our Times' regular film reviewer.

This article originally appeared in Winter 2015-16 of Our Times Magazine. Support our work by subscribing, advertising, or donating today!