A Tragedy That Didn’t Need to Happen

The Pandemic in Long-term Care: A View from Ottawa 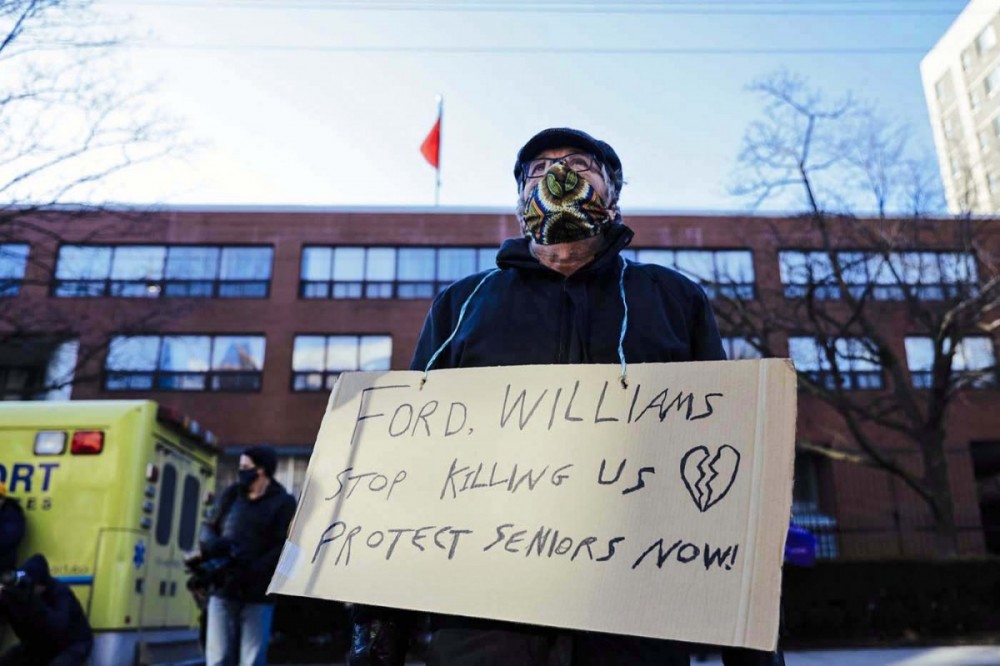 Part of the Sienna chain, the St. George Care Community LTC facility, in Toronto, has had one of the worst outbreaks in Ontario. The Sienna chain has also had some of the highest COVID numbers in Ottawa. PHOTOGRAPH: COURTESY SEIU HEALTHCARE

Residents, workers, and families have suffered immeasurably during the COVID-19 pandemic. In Ontario, over 3,000 residents in long-term care have died from COVID-19 as of mid-January, representing the vast majority of pandemic-related deaths in the province. About 5,000 staff have contracted the virus, resulting in 10 deaths.

Residents have suffered greatly from isolation, with reports showing a direct connection between loneliness and cognitive decline. Staff shortages, exacerbated by the pandemic, have at times led to residents not receiving basic hygiene care. Their basic nutritional needs, their medication needs, and their basic physical movement requirements have also not been met.

The workers themselves are exhausted from the long hours, and traumatized and stressed by how the virus has devastated so many long-term care homes. They are left vulnerable due to an ongoing lack of appropriate personal protective equipment (PPE). Meanwhile, families of residents, unable to have contact with their loved ones, and who are given no basic information about their well-being, watch helplessly from outside when a coronavirus outbreak strikes a residence.

Union retiree Christine Collins’ brother lives at Carlingview Manor, a private, for-profit, long-term-care home in Ottawa that is part of the Revera chain. “I went through the nightmare of my brother getting COVID-19 at Carlingview Manor during the first wave,” she says, “with the worry for him, no communication, no social distancing and a severe staff shortage. He was not safe.”

Today, during the second wave of COVID, she remains concerned about the level of care her brother is receiving, and for his well-being. “While communication has improved, there is still a lack of communication, no social distancing on the secure floor, and, most concerning, there remain significant staff shortages.” The only positive, she says “is the staff, who do the best they can through all of this and, to the many who go above and beyond, thank you.”

The second wave of the pandemic has brought even more suffering than the first wave did — to residents, workers and families. Ontario’s Time to Care Act (Bill 13), which needs to pass a third reading of the Legislature before it becomes law, would institute a minimum standard of four hours of hands-on care per resident per day. Initially, though, this new legislation would deliver only an increase of 15 minutes of care per resident in the first year of a five-year implementation schedule. 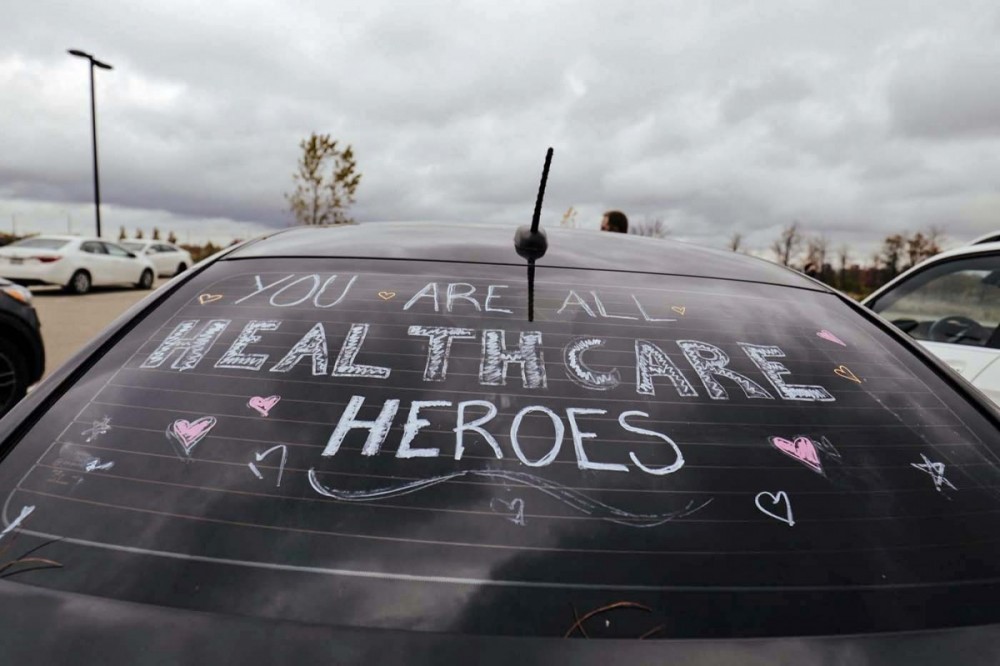 The Ford Conservative government has done little to institute even temporary improvements. Some PSWs (personal support workers) in Ontario are still waiting for the $3/hour pay raise promised by Ford, one which is due to run out this April. The Ford Conservatives could employ measures like those in Quebec, where 10,000 new workers have been trained as orderlies, at $21/hour. Once employed, they are paid $26/hour. In BC, all PSWs have been brought under one employment contract, with a substantial raise.

Instead, the Ford government has used its resources to accelerate privatization in long-term care. Most new capacity is going to for-profit homes that have had a terrible record of COVID-related cases and deaths. The Ontario Health Coalition has documented the disproportionate deaths in for-profit long-term care homes. The province’s own COVID-19 Science Advisory Table identified chain ownership as one of the most important risk factors for the magnitude of an outbreak, and the number of resulting resident deaths. Revera, Extendicare, and Sienna long-term-care chains have had some of the highest case numbers and deaths in Ottawa.

Michael Hurley, president of the Ontario Council of Hospital Unions (OCHU/CUPE), says about a third of care workers the union recruited for a recent academic study about the province’s LTCs “dropped out” when they found out workers in previous investigations were fired for speaking out.

The Ottawa Hospital staff have reported that the hospital is now operating at full capacity and can no longer supply staff to assist with improving conditions in long-term care homes and retirement homes, as they did during the first wave.

For years, hospitals have been trying to discharge older, frail adults to long-term care or retirement homes when they are unable to return home, in order to clear beds for patients — beds that are already at a premium due to shortages and cutbacks. This already dire situation has been exacerbated during the pandemic. In November, hospitals in Ottawa announced they will use a 120-bed, short-stay, transitional-care unit at the private, for-profit, Greystone Village Retirement home. The unit will be overseen by one of the local hospitals and managed by Integrated Care Solutions, a division of the for-profit company, Bayshore HealthCare.

This model is very similar to one deployed in Ottawa from 2008 to 2012. The deaths of three women, between 2008 and 2010, raised repeated concerns about a problematic program that transferred elderly patients from overcrowded hospitals to seniors’ residences. Even after its flaws were first exposed in 2009, the program was allowed to continue until 2012, when the Champlain Local Health Integration Network, Eastern Ontario’s health authority, finally shelved it.

All told, the program, in its various forms, carried on for nearly four years and received an estimated $10 million in public funding, as well as thousands of dollars in co-payments from each of the hundreds of patients. In November 2012, the Office of the Chief Coroner for Ontario reported to the Ministry of Health and Long-Term Care, saying: “LTCH beds are best suited to residents whose health conditions are stable, and whose care needs can clearly be met by the skilled staff and services provided at a given LTCH (long-term care home). In the case of residents with very heavy needs for care and supervision, attention should be paid to ensuring that their needs can be met before they are moved to a LTCH.” Also, they wrote: “Care of elders requiring LTC is complex and specialized. The use of temporary LTCH beds in facilities that are not experienced in this type of care should be discouraged.”

This kind of privatization gambles recklessly with frail elders. It’s not the only risky privatization project, though. Another hospital campus will be the site for 256 new spaces for Schlegel Villages, a for-profit chain. This is the same company that withheld PPE from workers unless they signed a waiver stating that the company wasn’t liable if the personal protective equipment didn’t fit properly — and this was done in the midst of a devastating outbreak at Schlegel.

The province announced 29 projects to create or upgrade long-term-care spaces. The two projects slated for Ottawa are both for-profit. Despite calls to end for-profit care, the province has used the pandemic to expand it. 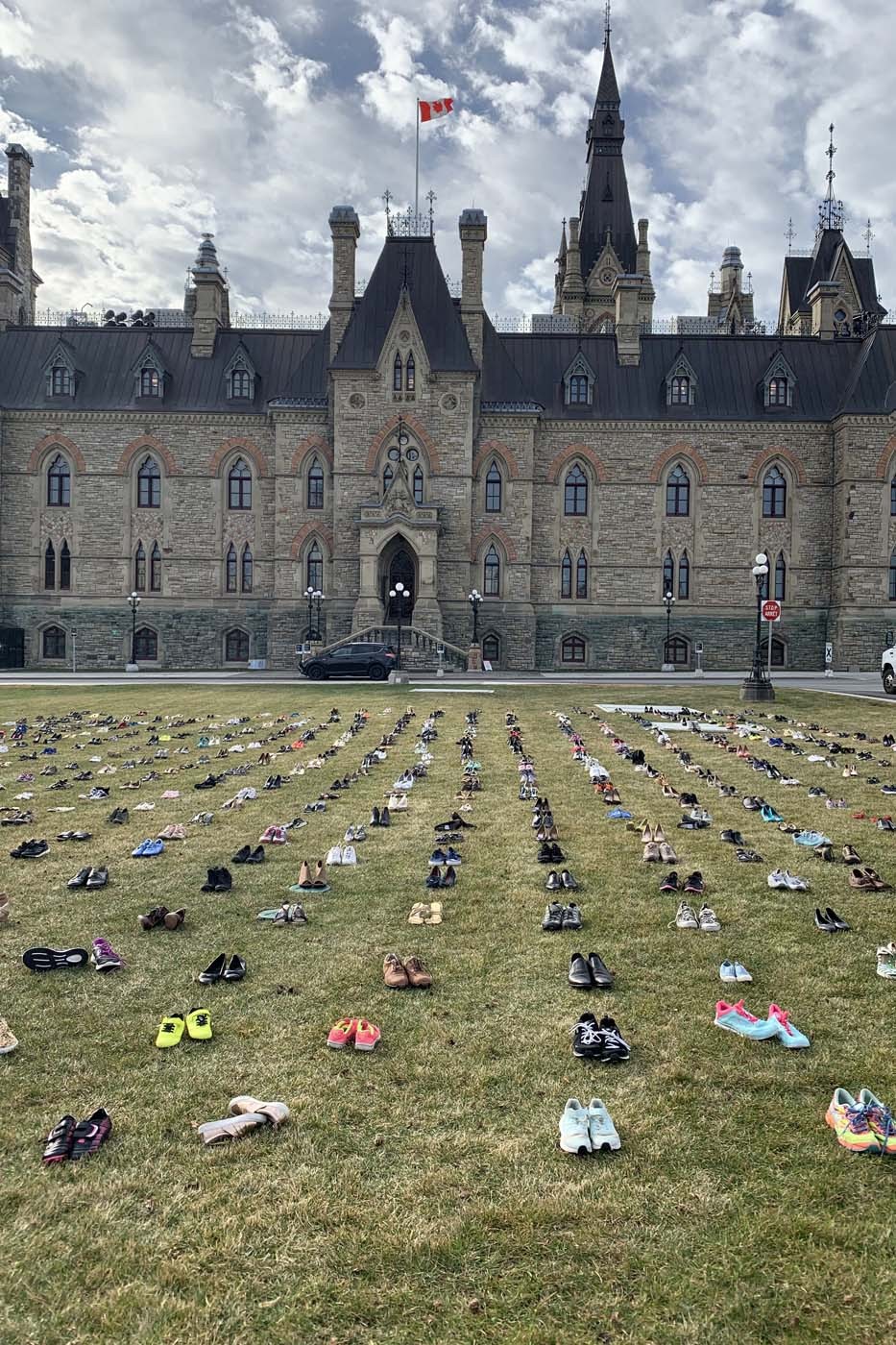 Last November’s “Broken Hearts, Empty Shoes” action on Parliament Hill was done in support of national standards for long-term care, and “to honour those we have lost in long-term care across Canada.” PHOTOGRAPH: MARY CATHERINE McCARTHY

Government policy during the pandemic has been lucrative for the for-profit chains. The three largest publicly traded operators in the province paid out $171 million to shareholders in the first three quarters of 2020 while receiving $137.5 million for pandemic pay for their workers. At the same time, the government is pushing legislation (Bill 218) to protect homes from being held responsible for negligence causing illness or death resulting from exposure to COVID-19, requiring plaintiffs to prove “gross negligence,” not simply negligence, according to critics.

Revera, which operates as a large chain of for-profit long-term care homes, is a wholly owned subsidiary of a federal Crown corporation that manages the funds of the federal government pension plans. One of the unions, the Public Service Alliance of Canada (PSAC), has called for Revera to be publicly owned and operated. Their call has sparked a movement of advocates and researchers. In September 2020, the Ottawa Health Coalition and the PSAC organized a virtual town hall called “Make Revera Public.” People participated across the country and the Make Revera Public campaign has since expanded considerably.

Municipally owned and operated LTC homes have consistently provided a better level of care for residents, and superior working conditions for staff. Their performance during the pandemic has continued this trend: their COVID case numbers and deaths are lower than those of both the for-profit and the not-for-profit homes. Municipal governments are held accountable by their communities. The Ottawa city council, when faced with the 2018 Fougère Report on violence in a city-run LTC home, responded to the report’s recommendations by increasing the number of care staff.

As a chapter of the Ontario Health Coalition, the Ottawa Health Coalition participates in campaigns to improve long-term care by increasing capacity in our public system. We have lobbied provincial MPPs and municipal councillors and federal government MPs to choose public solutions for this crisis in care.

This is what we need: national care standards for long-term care, with residents’ rights equal to those mandated by provisions in the Canada Health Act; a national healthcare labour-force strategy for the recruitment and retention of care staff, especially PSWs; and, an increase in health care funding to the provinces that is tied to improving long-term care. A large majority of Canadians are in favour of eliminating profit-taking from health care.

So here we are in the winter 2021 lockdown, with COVID-19 cases and deaths increasing. The big LTC chains know that the Ontario Minister of Long-term Care has their corporate backs. The rest of us anxiously await a vaccine shot, and hope our loved ones and the workers in LTC are safe and receiving the support they need. We need to make changes now. Tragedy continues to strike, each new day.