The Coalition of Black Trade Unionists on the Move, Together 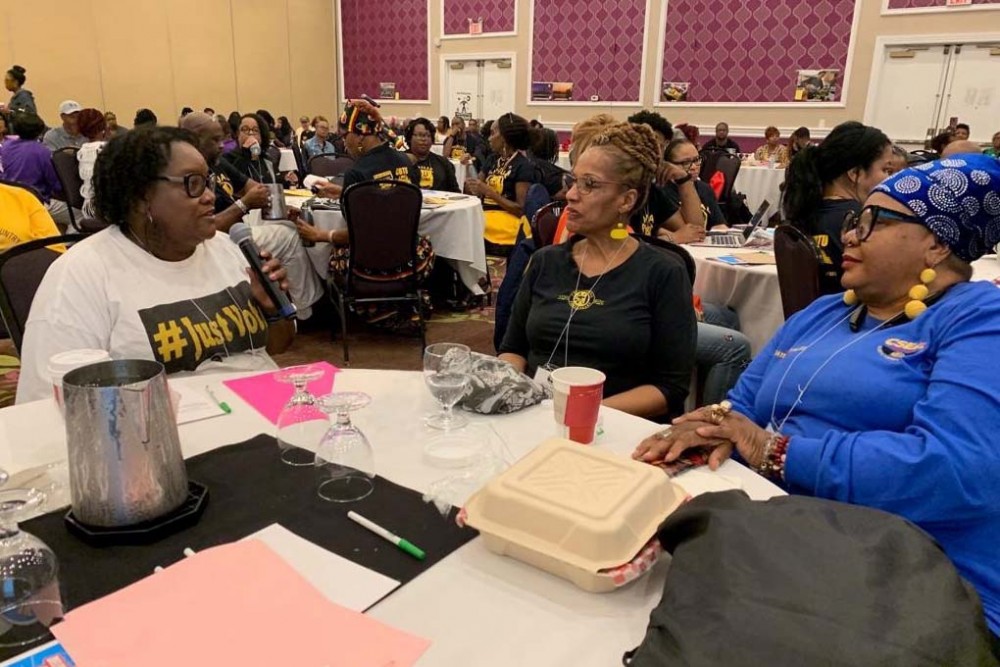 “In Unity, Strength” is the foundational belief of the labour movement. But what does unity look like? In August, over 150 members of the Coalition of Black Trade Unionists (CBTU) came to Toronto from across the U.S. and Canada for a regional conference with the theme “United for a Better Tomorrow.” CBTU, a community-based organization that supports “workers’ rights and the communities we live in” was created in 1972 to provide a voice for Black trade unionists. It has chapters across the United States and in Canada, as well as some members in the U.K. and the Caribbean. The CBTU Ontario Canada Chapter is part of Region 1.

Terry Melvin, president of CBTU International, provided context for the gathering with a call to revive our labour movements in order to confront the rise of the right, xenophobia and hate. The need for unity could not be greater, whether we’re facing #45’s promotion of white supremacist ideology in the U.S. (CBTU members do not mention the name of the 45th U.S. President); Ontario premier Doug Ford’s unremitting cuts to public services, police oversight and environmental regulations; or Brazilian President Jair Bolsonaro’s genocidal destruction of the Amazon rainforest and Indigenous peoples.

Keynote speaker Fareed Michelen spoke about his lived experience following 9/11 as a descendent of a Palestinian communist activist living in the United States. Michelen observed that “9/11 created a hierarchy of privilege rooted in Islamophobia, but there is no hierarchy of oppression. Today you can be racially profiled based upon your religion and tomorrow for driving while Black.” He also called for unity and solidarity, saying: “We can’t be silent in the face of oppression. When the master cracks his whip, we must be united and speak up.” Michelen concluded by quoting from James Baldwin’s open letter to Angela Davis in 1970, when she was in prison: “We live in an age in which silence is not only criminal but suicidal. . . .   For if they take you in the morning, they will be coming for us that night.” 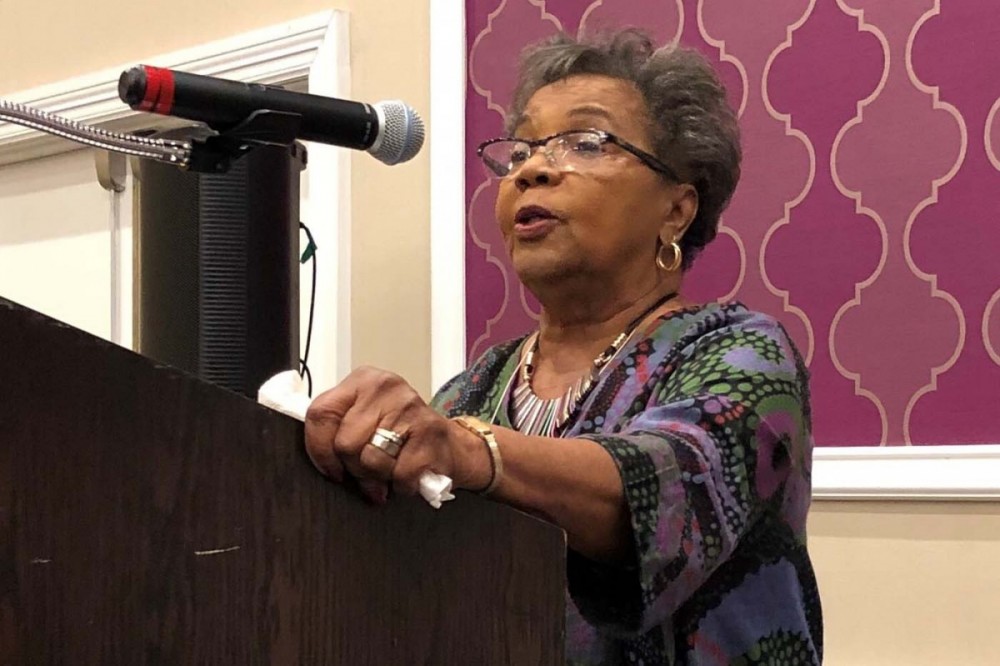 June Veecock was founding president of the CBTU Ontario Chapter, and, in 1986, she became the Ontario Federation of Labour’s director of human rights. PHOTOGRAPH: CHRISTOPHER WILSON

June Veecock, first president of the CBTU, Ontario Chapter, expressed her pride in the longevity and growth of the chapter since its founding over 20 years ago. “Unity requires commitment and purpose,” she said. “We need elected leaders, including the Premier of Ontario, to respect the rights of workers. . . . What does a better tomorrow look like? Where Black men can walk free without fear of being executed and women do not live in fear of violence.” Veecock thanked CBTU for all its support over the years, saying: “CBTU is my home and where I belong.”

Matthew Green, NDP candidate for Hamilton Centre, in Ontario, asked delegates to shout out “Black Lives Matter Here” and to reflect on the struggle led by Black, Queer and Trans activists against police brutality. He said that using an intersectional analysis, which values each of our identities, is a winning and inclusive approach to building unity and gaining political and social change.

Denise Hampden is a regional education officer for the Public Service Alliance of Canada, and co-facilitator of the Green Is Not White Environmental Racism workshop. PHOTOGRAPH: CHRISTOPHER WILSON

“Green Is Not White” and “Man in the Mirror” workshop facilitators asked participants to discuss how to better connect Indigenous and Black struggles to stop environmental racism, and to reflect upon our own capacity to become agents of change. The workshops were designed through a newly created workshop committee, as well as standing committees of CBTU.

Jalisa Saud is a member of CBTU’s New York Chapter. A nurse – MSN, APRN, AGNP-BC (New York State Nurses Association) – she encouraged members to reflect upon health promotion within our communities, saying, “stress reduction within the labour movement is often difficult, but we need to take care of ourselves: mind, body and soul.” Saud challenged the stigma associated with mental health: “Mental health is criminalized for Black men, and the strength perceived in Black women is why often [our] pain is not taken seriously and we are treated differently in childbirth and cancer diagnosis.”

Shaun D. Francois 1 is president of Board of Education Employees Local 372, in New York City, and president of AFSCME DC37 (American Federation of State, County and Municipal Employees). He called for intergenerational unity by demanding more opportunities for millennials within CBTU and our broader labour movements. The under-representation of young workers is “unacceptable” he said during his luncheon address.

The panel discussion on the trades, which focused on increasing diversity among their members, was chaired by Chris Campbell, a Carpenters Union Local 27 business representative. Rosemarie Powell from the Toronto Community Benefits Network observed that less than two per cent of construction jobs are held by Black workers and less than four per cent by women. Community Benefits Agreements are negotiated with the view to breaking that cycle of systemic exclusion. 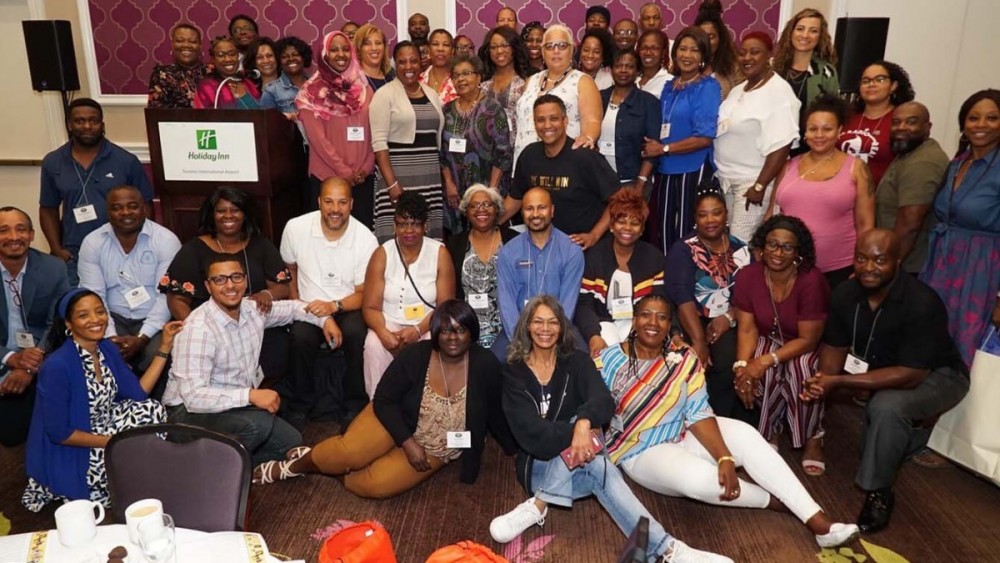 Yolanda McClean, CBTU Ontario Chapter president and Sharon Lovelady-Hall, CBTU Region 1 president, closed the conference by calling on delegates to organize as we face Andrew Scheer’s Conservatives in October 2019, #45 in 2020 and Doug Ford in 2022. We have a lot of work to do but, through unity and by building our strength, we will win. Visit cbtu.ca and cbtu.org for more information.

This article originally appeared in Fall 2019 of Our Times Magazine. Support our work by subscribing, advertising, or donating today!